McDonald’s Is ‘The Boss’—and That’s a Good Thing 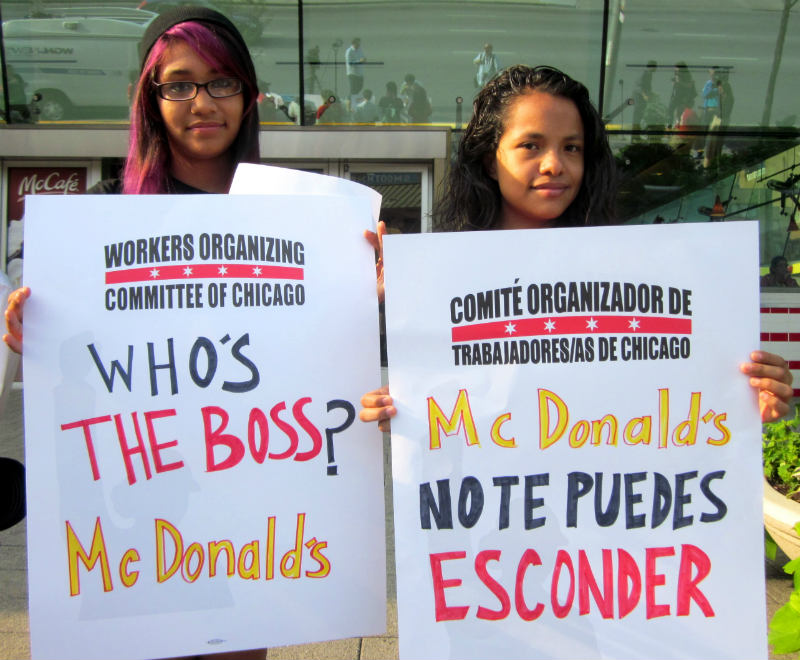 On Thursday morning, about 15 Chicago McDonald’s employees rallied in front of the city's monumental downtown location, chanting, “Hey, corporate, you can’t hide, we can see your greedy side!”

It’s not the first time demonstrators associated with the two year-old fast-food workers’ movement have crowded the sidewalk outside the Rock N Roll McDonald's—once the chain's busiest location in America—calling for a $15 an hour minimum wage and the right to unionize without retaliation from their employer. This time, though, they're here to celebrate rather than protest.

The cause for excitement? On Tuesday, the National Labor Relations Board’s general counsel Richard Griffin determined that McDonald’s can be treated as a “joint employer” at its franchises—which could make the corporation partly accountable for the labor practices of its franchisees.

“This is huge news,” says Nazly Damasio, a spokesperson for the Fight for 15 campaign, which organized today’s demonstration with support from the Service Employees International Union (SEIU). “This is something that workers have known all along, that [McDonald’s is] responsible for the poverty wages and the poor working conditions in their stores. ...It’s very exciting. It re-energizes us in the fight.”

In the past, McDonald’s has consistently deflected employee complaints by citing the fact that the vast majority of the chain's restaurants—around 90 percent—are franchises, whose owners and operators are ostensibly permitted to set their own wage scale and determine other policies. Thus, when staff members have taken their bosses to task for unfair labor practices, the corporation has dodged criticism and legal penalties, claiming that the franchisees are solely responsible for any unsatisfactory conditions. And according to the New York Times, these cases added up: In the past 20 months, workers brought 181 allegations to the NLRB, in which they accused their bosses at McDonald's of firing employees or cutting their hours to punish them for participating in protests. Griffin "found merit" in 43 of them.

Both workers and legal experts have long claimed that McDonald’s has more influence in these situations than it would like to admit.

“Employers like McDonald’s seek to avoid recognizing the rights of their employees by claiming that they are not really their employee, despite exercising control over crucial aspects of the employement relationship,” says Julius Getman, Professor of Law at the University of Texas, Austin. “This [ruling] from the NLRB’s General Counsel recognizes the reality of McDonald’s power and control. McDonald’s should no longer be able to hide behind its franchisees.”

Nevertheless, McDonald’s maintains that they are not joint employers at the majority of their stores and that the NLRB has misinterpreted the relationship. According to a statement from Heather Smedstad, Senior Vice President of Human Resources at McDonald’s USA, the hamburger chain “will contest this allegation in the appropriate forum.” She goes on to caution that “this decision changes the rules for thousands of small businesses, and goes against decades of established law regarding the franchise model in the United States.”

Demonstrators at the Rock N Roll McDonald’s believe, however, that if the decision changes the rules, it changes them for the better. “I’m out here celebrating our victory,” says Nancy Salgado who has worked at various McDonald’s for the past 12 years. She goes on to explain,

Corporate was trying to say ‘We’re not aware of the employees, the franchise pays whatever it wants to pay, we don’t know what else to do.’ But now that it has been admitted that they are in joint employment it’s exciting because we knew that all along. Our workers know that. We have corporate coming in every once or twice a month to our stores, checking out how everything goes. ... [The ruling] means a lot to us because we’re getting what we want: the big boss.”

If McDonald’s challenges its classification as joint employer, as it has threatened to do, either the NLRB or, eventually, the Supreme Court, could overturn Tuesday’s ruling by Griffin, an Obama appointee who worked at the International Union of Operating Engineers for 30 years. If the ruling stands, however, advocates say it could set a precedent for all lawsuits against other chain restaurants.

Meanwhile, those mobilized by the Fight for 15 movement intend to keep pushing for higher wages and a union.

“We’re struggling. We’re all struggling,” says Remone Hughes, a South Side McDonald's employee who has been to at least two other actions. Hughes says he has had a hard time paying his bills, especially his orthodontist's tab for his braces, which cost him $600. “To work as hard as we do and to make as little as we do—it’s an inhumanity,” he says.

At the last Fight for 15 demonstration he attended, outside McDonald’s headquarters in nearby Oakbrook, Illinois, he was among 138 protesters arrested for civil disobedience. When asked whether he would risk arrest again for his cause, he answers, “Probably. No, not probably. Yeah, I will.”