Teachers at Charter Schools Struggle, Too 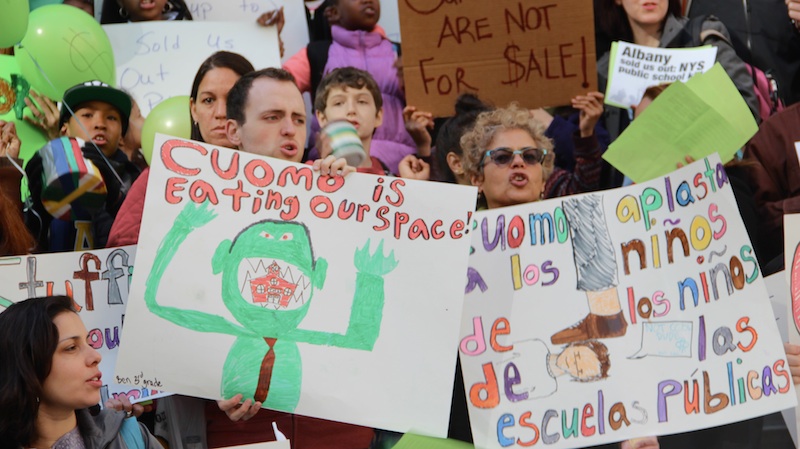 High-quality teachers are integral to academic achievement, experts agree, from Finland and Singapore to East New York and Morrisania. Cultivating excellent teachers and retaining them in the profession are paramount goals, shared by a bevy of bedfellows usually at odds in the education-reform debate, from teachers unions to charter-school champions like the Gates, Walton and Broad foundations.

But according to data from the New York State Department of Education, charter schools in New York City lose far more teachers every year than their traditional school counterparts. In some schools, more than half of faculty "turn over" from one school year to the next, according to NYSED school report cards.

Charter advocates at the New York City Charter School Center and at Success Academies, the city's largest charter network, say that at least some of the turnover is due to movement within school networks—teachers moving up the leadership ladder, for example, or to seed the faculty of new schools, which have opened at a rapid clip in recent years.

But even so, it's hard to explain a churn of more than half the veteran faculty, which is the case at 15 percent of charter schools for which the state reports data.

With so much scholarship on developing and holding onto talented teachers, why are New York's charter schools essentially draining of talent every year, with schools routinely losing a third, half, or, in extreme cases, up to two-thirds of classroom teachers? What happens to schools when faculty lounges have revolving doors? And how do charter leaders and advocates respond?

Near the top of the turnover chart is the Success Academies system led by former Councilwoman Eva Moskowitz. With 22 schools and 10 new schools opening in August 2014, it is the city's largest charter chain.

In Harlem Success Academies 1-4, the only schools for which the state posted turnover data, more than half of all teachers left the schools ahead of the 2013-14 school year. In one school, three out of four teachers departed.

But Moskowitz's network cites different figures. "Our teacher retention rate is 83 percent," says Ann Powell, senior managing partner for communications. "This work is extraordinarily hard, and while we'd like the rate to be 100 percent, we could not be more proud of our teachers and leaders."

C is for Consequences

Attrition matters a great deal for teachers in the schools, whose professional community must consistently adapt to new teachers, experts say, and to students who—accustomed as they may be to changing teachers every year—bear the subtler effects of being the human guinea pigs for rookie teachers in their debut academic posting.

Even Teach for America—which places young college grads in high-need, urban classrooms for a two-year teaching commitment, and currently has nearly 500 teachers in city charter schools—understands the value of experience: "We know that teachers with more experience under their belt are often more effective," says TFA communications director Katie Ware.

To better understand the charter churn, City Limits asked the New York City Charter Center, NYC charter schools' umbrella organization, for comment. They declined to comment for the record but suggested we contact the NYC DOE, whom we'd also asked for clarification. DOE spokesperson Harry Hartfield told us to talk to the charters themselves because Tweed doesn't track charter data. Meanwhile, the state education department said only: "The Department will work with the schools to resolve any discrepancies that may exist with the numbers reported."

While education agencies and institutions seem to be punting the ball, it seems likely that individual charter schools are taking note of the turnover issue.

Moskowitz famously expressed frustration about exiting faculty in 2011, when about a third of school staff left her school network for other jobs—midyear, after the school year had commenced. (Some even sent midnight emails resigning their positions, according to The New York Times.)

"It's hard for kids and families when you have an exodus," Moscowitz wrote in a newsletter to the school community.

Excerpt reprinted with permission. Read the full piece at CityLimits.org

Helen Zelon is a writer at CityLimits.org.