Fast-Food Workers Turn Up the Heat 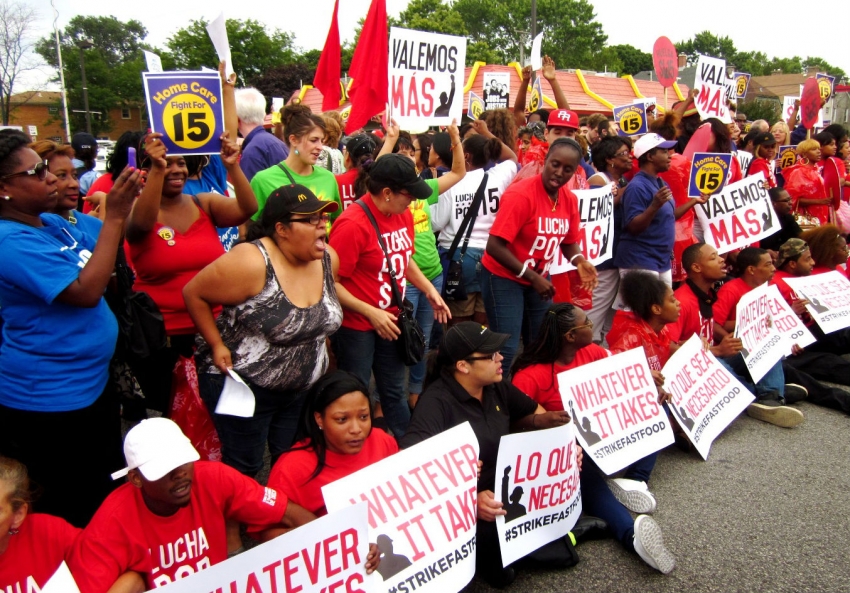 Fast-food workers rally at 87th street in Chicago as part of a nationwide action on September 4. (Amien Essif)

“Paddy wagon’s on its way,” announced a Chicago Police tactical officer over his radio early this morning. Shortly thereafter, a crowd of about 300 demonstrators—including over 100 striking fast food workers—began chanting “Take the street!” and proceeded to do just that. Marching between a McDonald’s on one side of the road and a Burger King on the other, the crowd blocked 87th street traffic on Chicago’s south side for about 20 minutes.

The action was the latest escalation in the fast-food workers’ campaign for a $15 minimum hourly wage and the right to form a union without retaliation. Two dozen workers proceeded to link arms and sit down in the road in an act of civil disobedience, prompting the police to take them away in handcuffs.

As Tyree Johnson awaited arrest by advancing police officers, he explained to Working In These Times why he was willing to go to jail.“I’m still living at the poverty level,” said Johnson, who has been employed by McDonald’s since 1992. “After 22 years, they refuse to pay me a decent living wage.” Johnson and his compatriates were taken to patrol cars, and 19 were cited and released this morning.

Later in the day, another two dozen protesters were arrested in a separate action on Chicago's West Side. By midday, arrests had taken place in cities including New York, Boston, Detroit and Las Vegas, with more actions planned later in the day in what organizers are calling the biggest fast-food workers' strike yet in the national push for "15 and a union," which began in November 2012.

“Whatever it takes” was today’s rallying cry, as workers at McDonald’s, Burger King, Wendy’s and other large quick-service restaurant chains planned to walk off the job in over 100 cities. In several cities, healthcare workers who are members of the Service Employees International Union (which also funds and supports the fast-food worker strikes) also came out to the actions in solidarity, though they were not on strike.

“We’ll do whatever it takes to get to $15,” said Nashville McDonald’s worker Jamar Black. “If we have to go to jail, we’re doing that.” Black, who is on strike today, spoke to Working In These Times over the phone as he attended a protest outside of a Sonic restaurant in Tennessee’s capital city. Because he is in “crew training,” he earns $9.25 an hour, about $2 more than the $7.35 federal minimum wage (Tennessee does not have its own minimum), but much less than the wage he’s asking for. Workers are planning to rally and commit civil disobedience in Nashville this afternoon.

Today’s nationwide strikes are the culmination of a summer of intensifying actions in the fast-food workers movement, known variously as the Fight for 15, Show me 15, and Fast Food Forward. On May 15, workers in an estimated 30 countries staged one-day strikes. The next week, 138 demonstrators were arrested in a protest outside of McDonald’s headquarters in Oak Brook, IL. These actions set the tone for a national convention in Chicago at the end of July, where the 1,300 workers attending voted unanimously to begin using civil disobedience as a national tactic.

Workers believe that their efforts to draw attention to the low wages and poor working conditions in the fast-food industry are having an effect on the national conversation. On Monday, Obama cited the fast-food strikes in a Labor Day speech calling for a raise in the federal minimum wage. Seattle passed a $15 municipal minimum wage in May, and on Wednesday Chicago Mayor Rahm Emanuel signed an executive order raising the minimum wage for employees of city contractors to $13 an hour. Emanuel has also endorsed a proposal to extend this raise to all residents of Chicago by 2018. So far this year, 10 states have opted to increase their minimum wage, including five states—Connecticut, Hawaii, Maryland, Massachusetts, and Vermont—where the lowest-paid workers will be earning more than $10 an hour.

The fast-food industry, however, has yet to budge. Rob Green, executive director of the National Council of Chain Restaurants called today’s “irresponsible” and “disturbing” in a statement released by the industry trade group. "Unions are calling it 'civil disobedience' when in reality, this choreographed activity is trespassing and it's illegal," said Green.

McDonald’s, meanwhile, has insisted that protesters’ demands are misguided. In a press release issued the day of the May 15 strike, company spokesperson Heidi Barker Sa Shekhem countered that the restaurant “offer[s] part-time and full-time employment, benefits and competitive pay based on the local marketplace and job level.”

She added that while the fast-food workers’ movement has targeted the McDonald’s brand, “It’s important to know approximately 80% of our global restaurants are independently owned and operated by small business owners, who are independent employers that comply with local and federal laws.”

But a recent ruling by the National Labor Relations Board’s General Counsel Richard Griffin could put an end to McDonald’s attempts to pin low wages and poor working conditions on its franchisees, and help bring labor law more in step with a changing industry. On July 29, Griffin determined that McDonald’s should be considered a “joint employer” in more than 40 pending complaints brought by workers against the corporation. If the ruling is upheld, McDonald’s could be held liable for conditions in its franchises. In response, McDonald’s issued a statement warning that the ruling “changes the rules for thousands of small businesses, and goes against decades of established law regarding the franchise model in the United States.” Many labor advocates cheer such a change, which they hope could ultimately enable workers to bargain directly with the corporations that determine their wages and working conditions.

Fight for 15 is not just targeting McDonald’s, however. Though it has yet to successfully unionize a fast-food restaurant, it aims to win better pay and working conditions for all of the nation’s 4 million fast-food workers, including employees of companies like Wendy’s, Burger King, KFC and Popeye’s Chicken. A similar effort by low-wage service workers at Walmart to win better pay and the freedom to unionize without retaliation began in 2010, and employs a similar organizing tactic: the one-day, or “wildcat,” strike.

Tony Garcia, who has been a member of the United Auto Workers union for nearly three decades and was attending this morning’s action in solidarity with fast-food workers, sees a connection between their fight and his own.  He believes that the ultimate goal is “not just a minimum wage” but “a living wage, and then a saving wage.” Given the yawning gap between the pay of corporate executives and their workers, he hopes that actions like today’s will help reframe the debate over what a "fair" wage means. “[With] the naysayers and the people who say you can’t do that, and it will ruin the economy, we should be having a debate about a maximum wage," he says. "You’ve got people at the top...those are the people who are taking money out of communities like these.”