In Pennsylvania, Labor Poised to Unseat Corbett in November Elections 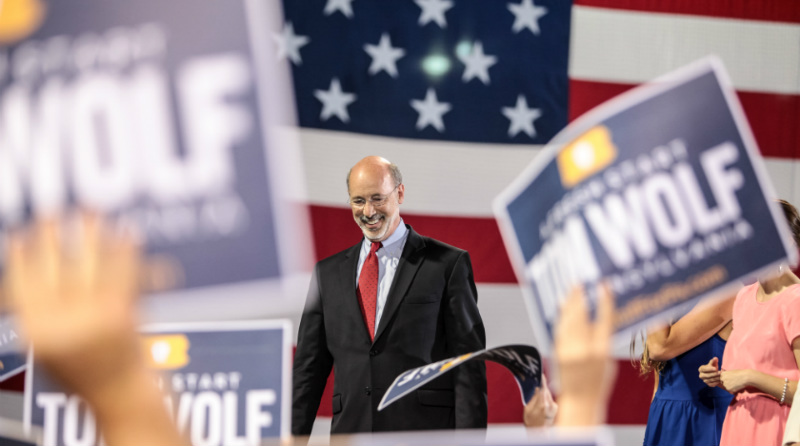 The potential victory of Tom Wolf, the Democratic gubernatorial nominee for Pennsylvania, would be a coup for labor this November. (Photo courtesy of Tom Wolf for Governor)

Just in time for Labor Day, a new election poll last week brought good news for Pennsylvania unions. The latest data from the Pittsburgh-based Robert Morris University Polling Institute shows Tom Wolf, a pro-labor Democrat running for governor of Pennsylvania this November, trouncing the conservative Republican incumbent by more than 30 points. If the poll proves predictive come Election Day, Wolf’s win would be a historic one, defying the trend of near-automatic reelection of incumbent governors, and ushering in a huge victory for the state’s unions.

The poll, released September 2, shows Democratic candidate Tom Wolf leading Republican Gov. Thomas W. Corbett by 55.8 to 24.7 percent.  Though Pennsylvania labor leaders caution that the enormous lead indicated by this poll is an outlier, other polls have also indicated that Wolf has a powerful lead over the unpopular Corbett. So powerful, in fact, that National Journal Political Editor Josh Kraushaar titled a recent commentary on Corbett, “Dead Man Walking.”

“The polls lately have been showing Tom Wolf in incredibly good shape,” says Rick Bloomingdale, president of the 800,000-member state AFL-CIO. “So I have to keep telling people, ‘Hey this is Pennsylvania. We’re a purple state. We can’t let up.’ We’re not taking this thing for granted.” Nevertheless, there is a buoyant feeling throughout the state’s labor community, he notes, based both on a sense of excitement that Wolf is a genuinely pro-labor candidate, as well as relief that Corbett’s four-year attack on unions is finally coming to an end.

Corbett was one of a number of anti-union Republican governors elected in 2010, a year notable for conservative victories. Pennsylvania is the only one of several governors’ races this year where a pro-labor Democrat clearly leads against an anti-union incumbent. Republicans such as Gov. Scott Walker in Wisconsin and Gov. Rick Scott in Florida are holding up well in early campaigning, and labor union campaigns to defeat these officials appear to be much more difficult than in Pennsylvania.

Wolf, a wealthy 65-year-old businessman who has never run for elected office, has emerged in recent months as a rather unlikely champion of labor. When the state’s Democratic Party scheduled a primary election this spring to choose a candidate for governor, Wolf was not the obvious favorite, nor the first choice of most labor unions (Wolf’s York, Penn.-based kitchen cabinets business is a non-union shop). He does have a solid record of involvement in Democratic Party politics, having served as the appointed Secretary of Department of Revenue during the tenure of former Gov. Ed Rendell (D), and an appealing message that his election would offer a “fresh start” in the often-acrimonious partisan atmosphere of the Harrisburg State House.

Bloomingdale tells In These Times that the state AFL-CIO made no endorsement in the primary, mostly because the member unions were badly split among the four Democratic primary candidates. But it was a hopeful sign for all unions, he says, that the four primary candidates all explicitly rejected Corbett’s most strident anti-union policies, especially his attacks on public education and his pledge to sign so-called “right-to-work” legislation that has been introduced in the Pennsylvania house. Wolf’s own detailed ‘Fresh Start’ proposals invited labor support with promises to raise the state minimum wage, protect public-sector worker pensions (a favorite Corbett target), strengthen collective bargaining rights and support broader economic and tax policies long favored by Pennsylvania unions.

So labor was quick to rally around Wolf when he scored an impressive victory in the primary, according to Bloomingdale. Since then, Wolf has been endorsed by the Pennsylvania AFL-CIO, the State Building and Construction Trades Council, non-AFL-CIO unions like the Service Employees International Union and the International Brotherhood of Teamsters, and even by the 40,000-member statewide unit of the Fraternal Order of Police, which previously endorsed Corbett. Only the relatively small Laborers District Council of Western Pennsylvania and Pittsburgh-based Boilermakers Local 154 have come out in favor of Corbett.

Wolfe spokesman Jeff Sheridan provided this statement to In There Times:

Tom enjoys broad support from organized labor, and he looks forward to working with the men and women of labor as he heads toward November. Under Corbett's failed policies, our schools are suffering, our economy is stagnant, and middle-class families are shouldering an unfair burden. The people of Pennsylvania are ready for a fresh start because they know it's time to restore funding to our schools and rebuild our economy so it works for everyone.

A lot of Wolf’s current popularity is a result of backlash from repeated blunders by Corbett, remarks Wendell Young IV, President of United Food and Commercial Workers Local 1776. One of Corbett’s most damaging political mistakes, Young believes, was a decision early in his tenure to cut about $1 billion in state aid to education. Although opposed by teacher unions, the real political damage to Corbett was that it forced cities and towns across the state to make painful school cuts, or raise local taxes, or both. “He made a lot people mad with that. But it’s even worse. He’s never tried to work with the legislature on this issue, or any other. I can tell you from personal conversations that there are quite a few Republicans in Harrisburg looking forward to Wolf becoming governor,” says Young.

Over the course of the current governor’s tenure, Young has personally devoted much of his time to fighting legislative battles in the state capital, including Corbett-supported proposals to dismantle the network of state-operated liquor stores, which employ thousands of union members. It’s been a constant struggle for more than three years to beat back these privatization proposals, Young says, but the union has been largely successful in defending itself.  Local 1776 has become a strong backer of Wolf in part because he has pledged to end the attacks on the state liquor store system, explains Young. “We’ve already made a big contribution to the campaign.”

Other unions that have made major campaign contributions to Young include the American Federation of Teachers, the Pennsylvania State Education Association and SEIU.

Neal Bisno, president of SEIU Healthcare Pennslyvania, a unit of the Service Employees International Union, says that Wolf’s progressive credentials are solid and that SEIU is supporting him without reservation. “This election is about going on the offensive against the right-wing ideology,” of Corbett and other conservative Republicans, Bisno tells In These Times. “These attacks on public education, these attacks on public-sector workers, these attacks on unions—they are not doing anything to build the middle class or improve the lives of the regular people of Pennsylvania. So, it’s not a surprise that Corbett is unpopular,” he says.

A Wolf victory would be a historic win for state Democrats because no incumbent governor of either party has been denied re-election in modern memory, Bisno points out. Gubernatorial elections also tend to be quite close, adds the AFL-CIO’s Bloomingdale, so a Wolf victory with 55 percent of vote “would amount to a landslide.” A landslide could also likely produce significant Democratic Party gains in the state legislature, he adds, for a truly historic election that favors unions.