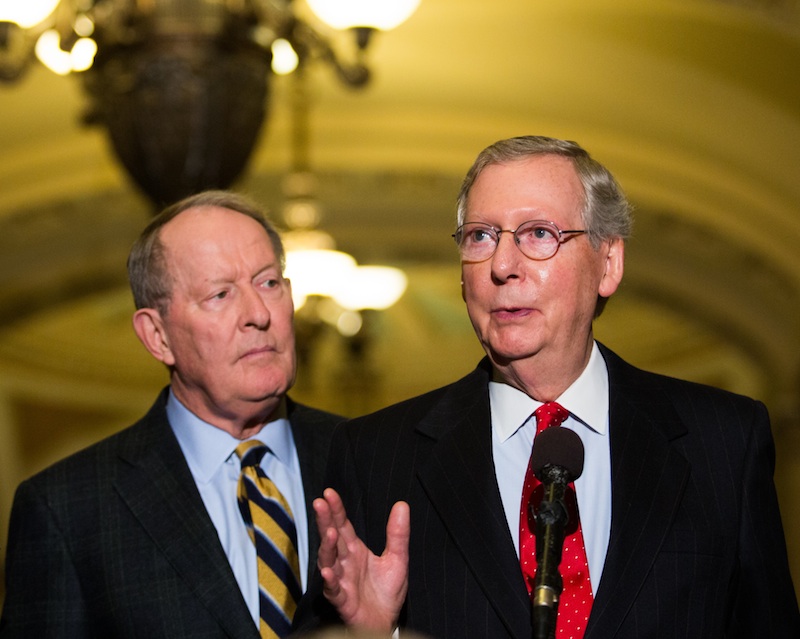 Republican Sens. Mitch McConnell and Lamar Alexander have introduced a bill that would give the NLRB's Republican and Democratic members equal power in deciding cases—a prescription for gridlock. (Drew Angerer/Getty Images)

This week, Republican Senators introduced a bill they call the “The National Labor Relations Board Reform Act.” Its chances of passage are very slim, but that’s beside the point: The GOP wants to emphasize its displeasure with President Barack Obama’s appointments of labor-friendly board members who thwart businesses’ attempts to keep unions out of their workplaces.

The key feature of the bill would neuter the board (already too weak by many standards) by mandating that it be made up of three Republicans and three Democrats—a prescription apparently designed to ensure permanent partisan gridlock. It would also restrict the authority of the board’s chief prosecutor and cut the operating budget of the agency if cases weren’t decided in a timely manner. Larry Cohen, President of the Communications Workers of America (CWA), remarks that the bill would mean “the NLRB just can’t do anything any more—and that’s exactly what they [Republicans] want.”

“This legislation will turn the National Labor Relations Board from an advocate to the umpire it ought to be,” stated Sen. Lamar Alexander (R-Tennessee), in introducing the bill jointly with Senate Minority Leader Mitch McConnell (R-Kentucky). “The board is too partisan, swinging from one side to the other with each new administration—and while this didn’t start with President Obama, it’s gotten worse as he's loaded the board with union insiders.”

Alexander’s statement came one week after the Senate’s Health, Education, Labor and Pensions (HELP) Committee held a hearing on Obama’s nomination of Sharon Block to fill an upcoming vacancy on the NLRB. The hearing is apparently what prompted Sen. Alexander to introduce the bill. Republican members of the committee were polite to Block but openly hostile to her nomination.

Block, an unassuming career bureaucrat, has done little personally to attract opposition. She has worked as a non-partisan attorney on the NLRB staff, and was also employed by the HELP Committee from 2006 to 2009, when it was run by late Sen. Edward Kennedy. During her 18-month tenure on the board in 2012-2013, she voted with other Democrats in controversial cases, but this sort of voting pattern has been the norm for decades for appointees from either party. Her time on the board was cut short when the U.S. Supreme Court ruled in the Noel Canning v. NLRB case last year that Block’s recess appointment was unconstitutional, forcing her departure.

Alexander, who serves as the highest-ranking Republican on the panel, set the tone of the hearing by beginning with a long complaint about Block’s tenure on the board. Block “chose ... to create confusion and instability” by accepting the unconstitutional recess appointment in the first place, Sen. Alexander claimed, and “revealed a troubling lack of respect for the Constitution” by continuing to serve even after a lower federal court had ruled against the recess appointment. Furthermore, she “demonstrated a willingness to tilt the playing field toward organized labor” in her voting record as an NLRB member, he charged.

Despite the criticisms by Sen. Alexander and other Republicans, Obama quietly reappointed Block to the NLRB in July. If confirmed, she will fill a vacancy created by the retirement of Nancy J. Schiffer, whose term expires in December.

CWA’s Cohen says Alexander’s remarks about Block are a gross misrepresentation of the facts, and his new bill is evidence of his anti-worker bias.

The attacks on Block are “pure victimization,” Cohen says. Republicans in the Senate have consistently delayed and obstructed Obama’s appointments to federal offices, he says, and the recess appointment of Block was simply a response to this obstruction. Whatever political differences exist between Obama and Sen. Alexander, he adds, it is unfair to impugn the integrity and professional qualifications of Block.

According to Cohen, Senate Republicans are aiming to delay or derail Block’s nomination because they fundamentally object to any government action that favors workers or unions over the financial interests of business. “Let’s face it, people like Alexander don’t believe in the National Labor Relations Act”—which established the NLRB in 1936—“and they would prefer that the NLRB do nothing,” he says. “That’s why they are against Sharon Block, just as they have been against every Democrat that Obama has nominated.”

Cohen says it is hard to predict whether Block would be confirmed by the full Senate in time for her to succeed Schiffer when she departs in December. If the five-member board is reduced to four—two Democrats and two Republicans—the result could be gridlock.

New Senate rules prevent the indefinite delay of appointments, so Cohen believes Block will ultimately be confirmed on a strict party-line vote. But some 300 other nominees for other federal positions are also awaiting a vote, he notes, so no quick action is anticipated.

The CWA is a sponsor of In These Times. Sponsors have no role in editorial content.