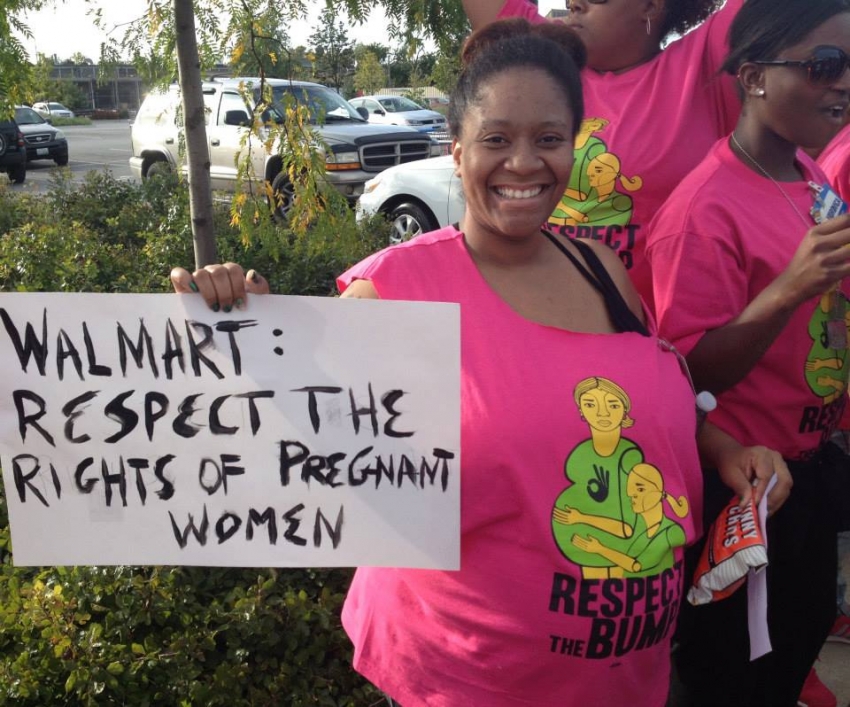 Walmart workers protest the company's pregnancy policies outside of a Chicago Walmart in September. (OUR Walmart Facebook)

In February, Bene’t Holmes asked her manager at a Chicago Walmart to put her on lighter duty. She was four months pregnant and her job included lifting heavy cardboard boxes containing two large bottles of bleach, straining her back and making her fear for her health and the health of her child. But the manager told her to continue with her work, that she was expected to lift 50 pounds or more.

“So I stayed there,” Holmes says, “and the very next day when I came into work, I had a miscarriage on Walmart’s property, in the back bathroom.”

Holmes says she subsequently missed 18 days to recover, prompting management to “coach” her—Walmart’s jargon for a formal reprimand—for the unexcused absences and to give her a demerit point, which she would have to perform additional work to expunge from her record.

This was not simply the fault of an incompetent manager, but the result of Walmart’s policy toward expectant mothers, according to a nascent pregnant worker advocacy group “Respect the Bump,” which held its first in-person meeting in Chicago on September 24.

Sponsored by the United Food and Commercial Workers Union (UFCW), the meeting brought together about a dozen workers from different parts of the country including California, Colorado, Minnesota and Illinois, with the shared experience of working while pregnant at the nation’s largest employer of women.

Attendees established a list of demands to present to Walmart, including to comply immediately with the 1978 Pregnancy Discrimination Act and to craft a store policy in line with the Pregnant Workers Fairness Act, a more progressive bill pending in Congress. The group is also calling for the installation of breastfeeding stations in all Walmart stores and recognition of pregnancy-related doctors’ notes.

And in solidarity with its parent organization OUR Walmart, attendees of the Chicago meeting elected to demand $15 an hour minimum wage for all Walmart employees and access to consistent full-time work.

After the meeting, Respect the Bump went public with its demands, staging a demonstration in front of the Walmart in the Chatham neighborhood on Chicago’s South Side where Bene’t Holmes suffered her miscarriage in February.

The demonstrators expected to walk into the store and present the manager with their demands but were stopped by security and made to stand on the sidewalk. Eventually, the manager came out, flanked by security, and Holmes and her fellow members of Respect the Bump handed him a water bottle and a stool—two items representing the “little things” that can help prevent a miscarriage, according to Holmes.

Workers say that cashiers are made to stand while working and are forbidden to keep water bottles on hand at this Walmart store even if a worker is pregnant. Organizers point to stores in Colorado and Texas with similar working conditions.

“He didn’t shake our hands,” says Holmes of her manager Tony who accepted their props. “Usually Tony shakes hands.” She told In These Times that she did not face retaliation for participating in the demonstration once she returned to work later that week. In fact, the manager attempted to shake her hand, but Holmes says she told him she “needed that handshake the day of the rally.”

For a number of those involved, the meeting and subsequent protest was a landmark in the campaign “for respect at Walmart.” “Respect the Bump” is a sub-group of a sub-group: The UFCW has been organizing Walmart workers for a little over three years through its subsidiary Organization United for Respect at Walmart (OUR Walmart), the non-union worker group responsible for the one-day Walmart strike action.

OUR Walmart began reaching out to fellow “associates,” as Walmart calls its employees, who had come out publicly—mostly through social media—about facing mistreatment at their workplace while pregnant.

Tiffany Beroid was one of the first to get involved. Seven months into her pregnancy, Beroid brought a doctor’s notice to her manager which recommended that she perform lighter duties at her Walmart in Maryland, but, Beroid told the Washington Post, the manager said they had no such work for her and pressured her into taking unpaid maternity leave.

Exasperated, Beroid reached out on Facebook to other women in her situation which caught the attention of OUR Walmart, according to the Post.

The group of women workers that emerged began calling themselves Respect the Bump around October 2013 and, with the help of the National Women’s Law Center (NWLC) and the women’s advocacy group A Better Balance, claimed a victory for their cause this spring. A worker associated with Respect the Bump filed a class action lawsuit in January alleging that Walmart’s company policy “explicitly denied pregnant workers with medical needs the sorts of accommodations made available to workers with ... needs arising out of disability or on the job injuries,” according to Emily Martin, General Council at NWLC. Then in March, the retail giant quietly rewrote its non-discrimination policy to include “temporary disability caused by pregnancy.”

But Respect the Bump and the coalition of women’s advocacy groups supporting their work argue that the change at Walmart does not go far enough. Since the new policy states that workers are eligible for accommodation if they suffer from a “temporary disability caused by pregnancy,” activists claim that it fails to address the needs of pregnant employees who are not disabled but are unable to perform their normal duties. Martin explains:

For example, a perfectly healthy pregnant woman may be advised by her doctor to avoid contact with certain chemicals in the workplace because of the danger they pose to a pregnancy, or may be advised to stay off high ladders or avoid heavy lifting in the final weeks of pregnancy because pregnancy leaves one more vulnerable to balance problems or injuries from lifting.

She argues that allegations of discrimination from Walmart employees made after the policy change took effect suggest that not much has changed. Whether the company’s policy is insufficient or is being applied too narrowly, Martin says, “It is a problem under pregnancy discrimination law, as well as a huge problem for the pregnant workers affected.”

Walmart, however, stands by its new policy and has denied that the change was a result of “outside pressure,” asserting on its website responding to OUR Walmart that the company’s new policy “goes well beyond federal and most state laws, including the Americans with Disabilities Act and the Pregnancy Discrimination Act” and is “best in class.”

Walmart isn’t the only major corporation accused of insufficiently accommodating pregnant workers. This fall, the US Supreme Court will hear a case against the United Parcel Service (UPS) similar to the one aimed at Walmart: A pregnant worker asked for a break from heavy lifting and was told instead to take her unpaid leave.

Walmart and UPS both argue that their policy complies with the 1978 Pregnancy Discrimination Act. But this defense, regardless of whether or not it is true, assumes that  federal law provides adequate protection for pregnant workers—an assumption that many advocates contest.

President Obama called for reforms to pregnancy protections this summer, acknowledging that the US trails other countries such as France, which provides up to three years of paid leave for mothers. The US, in contrast, has no federally mandated paid parental leave, and in all sectors of the workforce, women face the dilemma of choosing between a healthy pregnancy and the paycheck they rely on.

“The United States is far behind other countries in what we provide for pregnant women and for new parents,” says Linda Meric, Executive Director of 9to5, a national advocacy group for working women.

She points out that, because the government has not created strong laws protecting pregnant workers as in most industrialized nations, only 12 percent of US workers have access to paid family leave (including maternity and paternity leave); this statistic drops to about 5 percent for low-wage workers.

“The workers who can least afford to be out of work without pay are the ones being put in that position,” says Meric.

How Walmart treats women—and not just pregnant women—has incited action from workers before. In 2001, an employee named Betty Dukes filed a class-action lawsuit against the company, alleging that she was denied the training she needed for promotion because of her gender. The number of women represented by the lawsuit grew to 1.5 million, becoming the largest civil rights class action lawsuit against a private employer in US history before reaching the Supreme Court. The case was ultimately dismissed on a technicality.

“It makes sense that [Walmart] would not have a thoughtful way of accommodating pregnancy,” says Liza Featherstone, who wrote about the case in her 2004 book Selling Women Short, “because pregnancy is a thing that has to do with women and this is a company that has a pervasive disregard for women.”

But she cautions that lawsuits have proven to be an ineffective means of reforming the country’s largest private employer.

“Betty Dukes is still working as a greeter at Walmart, and she is still barely getting by, and her complaints have not been resolved,” says Featherstone. “It absolutely can not be the only strategy.”

She sees Respect the Bump’s actions as a way forward. “It’s definitely going to take those kinds of confrontational strategies,”

Respect the Bump will continue with its weekly conference calls and Facebook chat room, and is planning another rally in California. Holmes, for one, is proud of how the group’s campaign is shaping up.

“I’m pretty sure we have a lot of victories coming,” she says. “[Walmart has] no choice but to change because there’s a lot of Walmart workers that have jumped on board.”