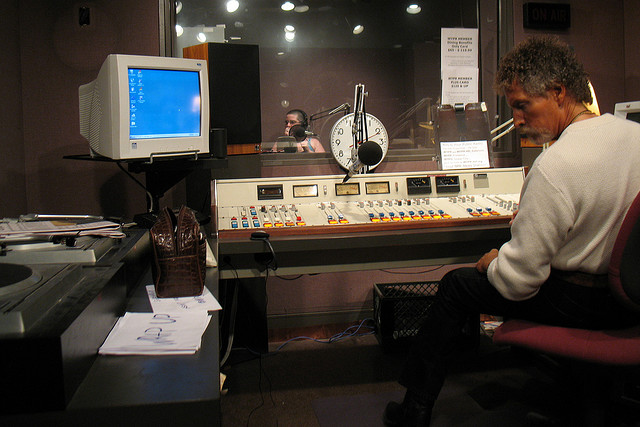 A view inside Baltimore public radio station WYPR's production booth. After a recent NLRB ruling, workers there likely will not be joining a union. (faultlesspajama / Flickr)

BALTIMORE – Union supporters at public radio station WYPR had their hopes crushed last week when a hearing officer for the National Labor Relations Board (NLRB) recommended against counting all the votes in a closely contested election held earlier this year. The October 31 recommendation almost certainly means the union will lose the election when the NLRB issues its final determination in the coming weeks, and leaves little hope that the organizing drive can go forward.

Hearing officer Chad M. Horton’s report was critical to the drive by the Screen Actors Guild-American Federation of Television and Radio Artists (SAG-AFTRA) because the result of a July 30 election was so close. A preliminary count showed the union, which has a significant membership base in the public radio sector, losing by a vote of 9-11, but seven votes were not counted due to legal challenges from lawyers on both sides of the labor-management divide—including attorneys from the union-busting firm Jackson Lewis.

By the union’s reckoning, a favorable decision from Horton on the seven disputed votes would result in a tie, triggering a re-run of the election. Instead, Horton determined that two crucial pro-union votes should not be counted—effectively dealing an election defeat to the pro-union workers.

“This is a disappointing conclusion that reflects an imperfect process” by the NLRB and the managers of the radio station, according to a statement from the WYPR Organizing Committee. “A majority of the full-time regular production and news staff still believe that our workplace and work product would be improved by collective bargaining. … We are disheartened by management's decision to spend significant station resources to undermine our democratic effort. We hope they will commit as fully to making measurable improvements to the workplace and supporting the production staff.”

The statement also included language that the committee would make no further comments on the case, and pointedly omitted any reference to legal appeals or any further union organizing activity.

The workers’ reference to undermining “our democratic effort” reflects a decision early this summer by the station managers to aggressively fight the union, especially by hiring the anti-union law firm Jackson Lewis to battle the SAG-AFTRA effort.

Jackson Lewis lawyer Laura Pierson-Scheinberg argued in front of the NLRB for the exclusion of the two pro-union votes, contending that the two individuals should be considered station supervisors and therefore ineligible under labor law to vote in the election. Despite counter-arguments from the union, NLRB hearing officer Horton sided with Pierson-Scheinberg.

Prior to the Halloween report from Horton, lawyers for both sides had agreed to withdraw challenges to four of the other contested ballots, and to discard the fifth. One legal source told In These Times that both sides recognized that the four ballots were split evenly between pro-union and anti-union votes, and would thus cancel each other out.

Jonathan Rogers, Chair of the WYPR Board of Directors and an executive of Merrill Lynch, the stock brokerage unit of Bank of America, told In These Times that the board had approved the hiring of Jackson Lewis but denied it was an attempt to defeat the union.

“We felt it was in the best interest of the station to ensure that the concerns of the organization were heard,” in the course of the NLRB process, Rogers says. Asked whether he was opposed to recognizing the union, Rogers replied, “My personal feelings are irrelevant.”

Marc Steiner disagrees. A former WYPR executive who now hosts a program for a competing radio station in the Baltimore market, Steiner was ousted from the station in 2008 after a showdown with current WYPR President Anthony Brandon over control at the station. He counters that the personal feelings of the board members are very relevant.

"The Board is made up of corporate executives and wealthy people, most of whom do not understand public radio," Steiner says. "It is really run, or at least it was when I was there, more like a commercial station."

Steiner says that WYPR workers he has spoken with wanted a union in part "to ensure a firewall between those corporate interests and programming. Unless things have changed [since I worked there], programming is under constant pressure to mold what is heard on the airwaves to interests of underwriters." He also reports hearing consistent complaints about heavy-handed management techniques and substandard pay levels—many complaints revolve around Brandon’s perceived autocratic style of management.

“I’m certainly sympathetic to their desire for a union,” Steiner says. "I’d be in favor if I was an employee over there.”