Your Next Bike Share Ride May Be Powered By Union Labor 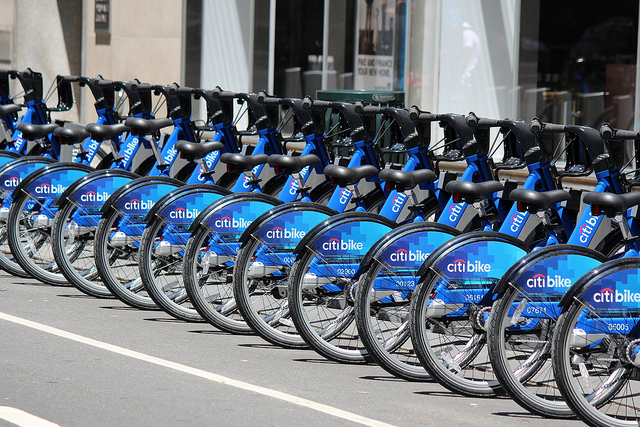 As bike sharing takes off around the country, workers are demanding a union.   (Shinya Suzuki / Flickr)

Only a decade ago, bike share programs were considered European. But just as the concept takes off in urban areas around the US, the workers who make it possible are unionizing.

After New York City workers organized the first ever bike share union in the US in September, three other cities—Washington, D.C., Boston, and most recently Chicago—have made significant progress on their own bike share worker organizing campaigns. A majority of workers in all three cities signed union authorization cards this fall; D.C. workers are negotiating a union election date while Boston and Chicago workers will vote whether or not to unionize within the next month.

The roughly 280 bike share workers in these four cities—who, despite the bike share services’ varying names, all work under the same owner, Alta Bicycle Share, which was recently bought by the real estate company REQX—may all soon be represented by the Transport Workers Union. TWU represents workers in more traditional public transit sectors like bus drivers and airline workers, but Local 100 now aims to lead a national campaign to organize rentable city bicycles like Citi Bike in New York and Divvy in Chicago.

“If it’s on wheels,” says TWU Local 100 director of education Nicholas Bedell, “we want to organize it.”

But the union didn’t actually launch the national campaign. According to workers, the headlines generated by a successful union drive in New York, where Local 100 is based, prompted workers in D.C., Boston and Chicago to contact TWU on their own accord.

Caleb Usry works for Chicago’s nearly two-year-old bike share company Divvy. He says he contacted Local 100 in early October after reading coverage of the first bike share union in the news. Usry is as a “rebalancer,” tasked with driving around the city and redistributing bikes from fuller stations where users have not rented many bikes to emptier ones where users have rented many.

Usray says much about the job was agitating—safety oversights, failure to receive promised raises, problems with scheduling. His coworkers, he says, were facing the same issues, and decided that forming a union was the only way to get their concerns addressed.

Last winter was a turning point for many workers, explains Nicole Cipri, a mechanic at Divvy. With temperatures below zero and frequent heavy snows, workers were sent out to shovel snow away from bike stations without thick gloves or boots and with plastic shovels that often broke. But Cipri is also fighting for a union to gain representation.

“A union is going to give us a voice in how the company works,” she says. “That’s really what we want,”

Another Divvy worker, who wished to remain anonymous to avoid potential retaliation from management, tells In These Times that he signed up to work with the company in June, the month it launched in Chicago, not only for the income but also because he wants to see the new mode of public transit take off.

“I would do this even if I wasn’t getting paid,” he says.

“There has not been a culture at the workplace that respects the workers’ input into how the system might be run,” Bedell says. “[Workers] are frustrated that they can’t put out as good of a product as they would like to.”

Usry, in his job as a rebalancer, encountered this “mismanagement” frequently. He says he has been forced several times to unload bikes in complete darkness from the back of the vans that Divvy uses to “rebalance” the numbers of bicycles at its stations. Some vans have not had functioning safety lights since last winter, Usry claims.

“If you’re working loading bikes in and out of that van at night,” he says, “you can’t see.”

Usry says he asked his supervisor to alert the general manager of the problem and the supervisor said he would do so that same night, but the next day Usry was working in the dark again. Management has yet to address the problem.

“Considering that there’s a labor union on the horizon, you would think that management would bend over backwards to take care of safety concerns—especially since that was one of our primary reasons for organizing,” says Usry. “Absolutely not. The request is still being ignored.”

Throughout October, Divvy workers started asking their co-workers to sign cards in favor of unionizing with TWU, gathering 43 signatures out of 56 employees. Management has refused to voluntarily recognize the union, but the workers and TWU have taken the case to the National Labor Relations Board. The date for a union election has been set for December 10.

For Boston’s bike share, where 30 out of 39 bike share workers signed cards, the NLRB has set the election date for December 4. Meanwhile, workers at Washington, D.C.’s Capital Bikeshare are negotiating a date for a union vote through hearings with the NLRB which started Monday.

Organizers are making quick progress despite the fact that management is mounting a serious challenge to workers. D.C.’s Capital Bike Share hired the notorious union-busting firm Jackson Lewis—which was also hired by Baltimore’s National Public Radio affiliate WYPR in what appears to be a successful attempt to block a union drive at the station recently—to represent the company in the coming legal battle with TWU, making workers a bit nervous.

To increase their chances of besting a legal team with a multi-billion dollar name behind it, workers launched an online petition drive for community support in preparation for the hearings and held a rally outside the NLRB offices Monday during the first hearing.

In Chicago, management sent two company-wide emails warning of the risks of unionizing and downplaying, according to workers, the level of support for unionizing among workers.

But the pressure from management doesn’t worry Usry.

“We don’t doubt that we’ll win,” he says, citing the overwhelming majority of workers who have signed union-authorization cards, paralleling the pro-union sentiment among Boston and D.C. workers.

Capitalizing on this momentum, TWU is currently investing resources in a national campaign to organize all the bike share workers in North America, according to Bedell. The union is dedicating organizers to focus on bike share workplaces, but Bedell hopes that the campaign will continue to drive itself as it has done this year.

If Chicago, Boston, and D.C. unionize, Bedell says, hopefully “other people see that and say, ‘Wow, I want to do that,’ and call us.”