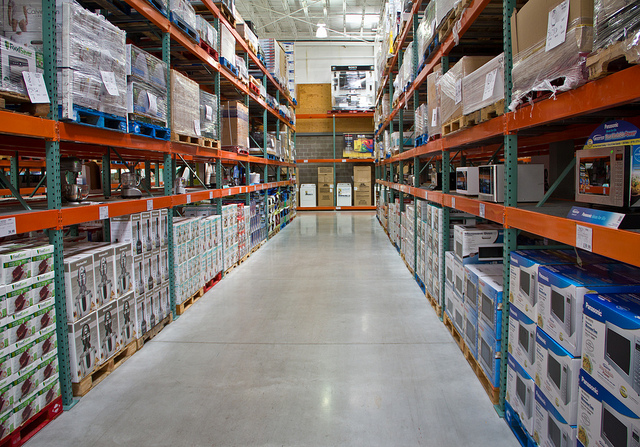 East Coast grocery warehouse workers will soon be feeling the pinch after their employer, Associated Wholesalers Inc., was purchased by the anti-union C&S Wholesalers after a recent bankruptcy court ruling. (Ken Teegardin / Flickr)

In a new version of the old ploy of manipulating federal bankruptcy courts to bludgeon unions into economic concessions or givebacks, the nation’s largest grocery wholesaler used sped-up court procedures to make a quick buy of one of its regional competitors last month—and, in the process, slash the pensions and benefits of 1,100 truck drivers and warehouse workers.

Members of the International Brotherhood of Teamsters in Pennsylvania, New York and New Jersey are angry over the loss and apprehensive about their futures, union leaders say. Their new employer, C&S Wholesale Grocers, has a reputation of buying up unionized companies, shifting the work of handling retail food products to non-union distribution centers and then getting rid of the union members altogether.

“The [members feel] they got screwed. … They are dissatisfied and angry,” says Bill Shappell, President of Teamsters Local 429 in Wyomissing, Pennsylvania, which represents about 450 warehouse workers, truck drivers and mechanics who have been affected.

Union members could see trouble ahead when their former employer, Associated Wholesalers Inc. (AWI), filed a Chapter 11 petition in federal bankruptcy court on September 9. Included in the court filing was an announcement that AWI and its main subsidiary White Rose Inc. didn’t want to reorganize its business under court protection, as is normal in most Chapter 11 cases, but rather wanted a quick sale to C&S. An auction was ordered, but only one other bidder came forward. The court approved the purchase by C&S on October 29.

Meanwhile, representatives of C&S began meetings with six separate Teamster locals in the region, presenting new contracts on a “take-it-or-leave it basis,” says Iain Gold, Director of Strategic Research at Teamsters headquarters in Washington, D.C. “It was clear to us that neither C&S nor SuperValu [the other bidder] would bid on AWI, or commit to hiring the existing workers, without new contracts in place” prior to the auction date, explains Gold.

“We had the new collective bargaining agreement rammed down our throat,” with the implied threat that all the Local 429 members would lose their jobs unless they agreed to concessions, Shappell adds.

Steve Vairma, Director of the Teamster Warehouse Division, highlighted the stark choice between a job now or unemployment tomorrow in a formal announcement to the members after C&S was declared the winning bidder:

We recognize this was a difficult choice for all Teamster members at AWI/White Rose. No one is ever pleased to be offered a choice of concessions or their jobs, but ultimately that’s what this came down to. The fact that AWI/White Rose was in bankruptcy and proposed such a quick timeline for sale was an indication of the precarious nature of its business. ...Our goal was to get the best deal and then put the ultimate decision of acceptance or rejection in the hands of the Teamster AWI/White Rose members to determine their fate.

The hardest part to swallow may be the damage to their pensions, Gold says, with employer all contributions to the union pension plans terminated. Instead, the new C&S employees are being offered a 401(k) savings account. Workers with 10 to 20 years of credit in the pension plan won’t be able to make up the difference of their potential full benefit by participating in the 401(k) savings plan. It not only affects the former AWI/White Rose workers—the four union pension plans that covered the workers are left with an outstanding unfunded liability of more than $40 million, he says, with no certainty that they will recover any of it.

“The bankruptcy process is typically used to shortchange existing workers and certain of the debtors [of the bankrupt company], especially the pensions, and AWI is no exception,” Gold says.

Gold says he and other union negotiators were able to avoid any wage cuts—Shappell says his members currently make about $20.40 an hour—but C&S sought to reduce labor costs by slashing health care coverage, reducing vacations and holidays, and other work rule modifications. All six Teamster locals agreed to some combination of these cuts.

Shappell adds that he is especially angered by the health care element of the new contract, in which workers lose their coverage under the Central Pennsylvania Teamsters Health & Welfare Fund and will now pay substantially higher premiums and increased deductibles under a C&S company-sponsored plan.

“I have nothing good to say about it,” and the members came close to voting down the new contract, Shappell adds. About half the AWI employees in Local 429 did not even bother to vote, he says, and the final tally was 185 members in favor of the concessionary agreement with 105 opposed. “We had a lot of guys that wanted to take a stoppage,” he says, referring to a strike.

“Make no mistake about it, they are not happy about the choices they faced and they feel that C&S took advantage of a distressed employer and used the bankruptcy court to get what they wanted. The business was healthy until 2008 recession, and certain parts of the company still are healthy,” Shappell says.

“They feel it was forced on them—the AWI side of the business was healthy, but the White Rose part dragged it down, he adds “It’s not right.”

Looking ahead, Shappell and Gold note that C&S has made no specific commitment to keep the existing AWI/White Rose warehouses in operation over the long term despite the union agreement to accept contract cutbacks.

“They are notorious for buying up and closing down,” Shappell says, citing the example of C&S subsidiary Ocean Logisitics, which bought a warehousing company in Dunmore, Pennsylvania, in 2006, only to shut it down in 2011. About 160 members of Teamsters Local 229 lost their jobs in the shutdown, with other job losses occurring earlier as C&S gradually shifted grocery warehousing work to non-union sites, according to the Teamsters. And Gold notes that was not an isolated instance: The union estimates it has lost about 4,000 jobs since 2001 in cases where C&S has bought a unionized company and then moved to shut it down.

C&S Senior Vice President Bryan Granger did not respond to repeated requests from In These Times for comment. AWI/White Rose spokesperson Aaron Palash would not comment except to confirm that the sale to C&S was finalized November 12.