Protests Get Results: Walmart Announces It Will Give Workers a Raise 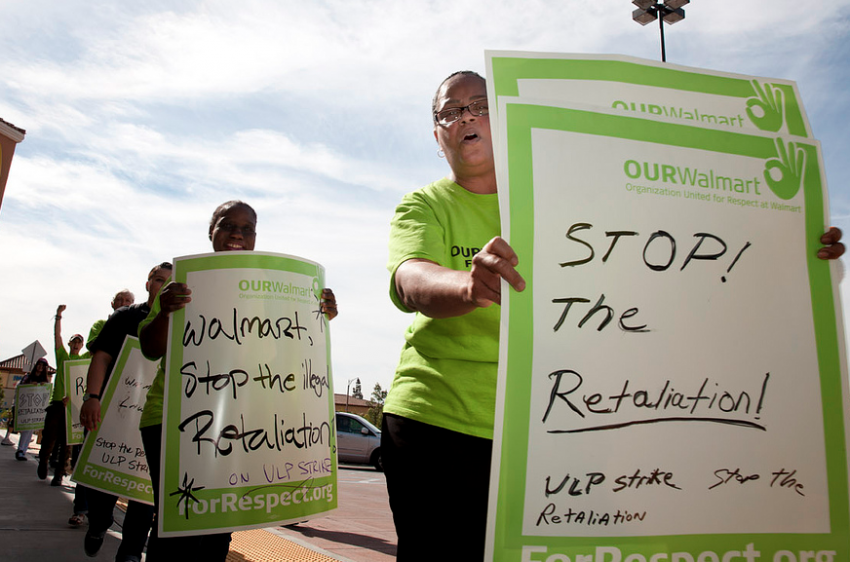 Recent low-wage worker strikes appear to be having an impact on the country's largest corporation. (UFCW / Flickr)

Low-wage workers’ widespread protests in recent years seem to be paying off.

Walmart is set to raise the starting wage for over 500,000 workers to $9 an hour coming this spring. The present federal minimum wage is $7.25, and the company says that it will raise the figure to $10 in February 2016.

Walmart CEO Doug McMillon said that there were other changes in store for the company this year. “We’re also strengthening our department manager roles and will raise the starting wage for some of these positions to at least $13 an hour this summer and at least $15 an hour early next year. There will be no better place in retail to learn, grow, and build a career than Walmart,” McMillon said in a letter posted February 19 on Walmart’s blog.

The company’s decision to raise wages for its workers comes on the heels of the Fight for 15 protests over the past few years, as well as the OUR Walmart strikes and protests by Walmart workers and their supporters.

The move to raise the minimum wage will affect all of the company’s full-time and part-time employees. Sam’s Club, which is owned by Walmart, will see its employees benefit from the raise, too. The $10 wage is contingent upon receiving and completing a skills-based training program for at least six months.

The move to raise the minimum wage for its employees coincides with the company’s recent strong fourth-quarter earnings. Walmart made $1.61 per share, and its revenue hovered around $131.6 billion, according to Business Insider. The retailer also earned $485.7 billion in revenue, with a net income of $16.4 billion, according to Forbes.

“Walmart U.S. delivered better than expected comp sales. Sam’s Club had its best performance of the year, and Walmart International had solid sales and profitability. Like many other global companies, we faced significant headwinds from currency exchange rate fluctuations, so I’m pleased that we delivered fiscal year revenue of $486 billion,” McMillion said in a statement.

While strong profits provide a convenient reason for the company to give the raise, the momentum has clearly been rising in workers’ favor in recent years. Protests were staged at about 1,600 Walmart locations in 49 U.S. states on Black Friday. The move toward a higher minimum wage seems to be inching ever closer to reality, so Walmart might just trying to stay ahead of the public relations curve by giving the bump now.

Shawn Gakhal is a spring 2015 editorial intern at In These Times. He is also the editor-in-chief of the Roosevelt Torch at Roosevelt University in Chicago.