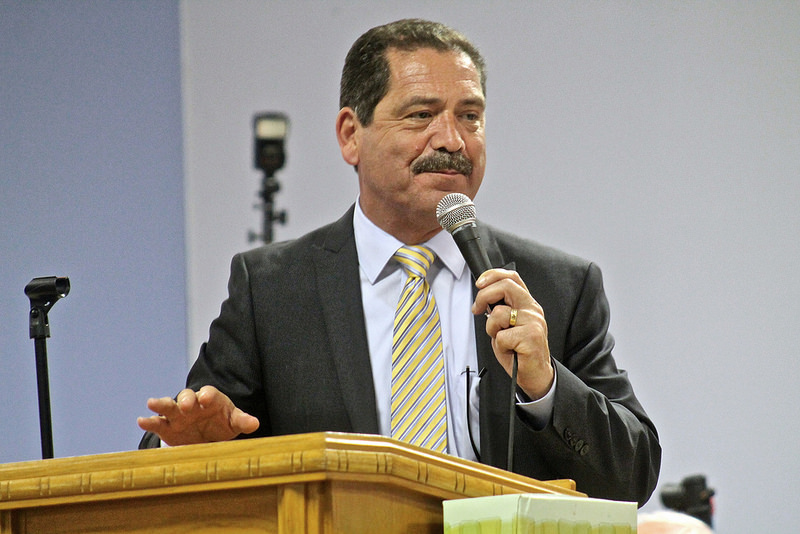 Jesus “Chuy” Garcia’s loss to Rahm Emanuel in the Chicago mayoral election is a blow to progressives. But the city’s grassroots movements are hardly dead.   (Bob Simpson / Flickr)

I walked into Jesus "Chuy" Garcia's post-election party last night just after the announcement that Garcia had conceded in the mayoral race against Rahm Emanuel. People appeared morose. But the DJ, surely under strict orders from the campaign, wouldn't stop blasting upbeat music. As I walked past a union staffer with tears in her eyes, Chicago's "Does Anybody Really Know What Time It Is?" began roaring out of the speakers.

A song posing such a question was a fitting coda for the campaign of a candidate who never really seemed to know what time it was in Chicago—or if he did, he didn't seem to care. The campaign is over, and we can now say it openly: Garcia was a mediocre candidate at best, and was far from the best for Chicago’s current moment.

Chicago has seen a massive upsurge in social movements, anchored by the Chicago Teachers Union (CTU) in the wake of its 2012 strike. Those movements primed the city for an unabashedly progressive and anti-austerity mayoral candidate; such a candidate never materialized, although one came tantalizingly close in the form of CTU President Karen Lewis (who was signaling she would run before being sidelined by a brain tumor).

Instead we got Garcia, who steadfastly refused to draw up a bold policy program, opening himself up to easy criticisms by Emanuel that he had no real plan for the fiscal crisis facing the city. Even late in the campaign, he continued to use phrases like "shared sacrifice" (usually code words for additional austerity measures on the backs of workers) in describing how he would solve the city's budget woes.

He refused to strongly endorse measures like a financial transactions tax. He drew ire from the Left and others for his plan to hire one thousand new police officers and for not denouncing the Chicago Police Department's "secret interrogation site.”

True to campaign form, Garcia’s concession speech was a tepid affair, hitting only a few progressive notes, with a nod toward the "tale of two cities" rhetoric about inequality and a passing denunciation of privatization. He spoke at greater length about the need for population growth in the city to bring it back to fiscal health, and how growth was more important to fixing the city’s finance than raising anyone’s taxes. A room full of a couple thousand union members and progressive activists desperate for a parting shot at Rahm Emanuel's pro-corporate, anti-worker governance, and Garcia launched into the beginnings of an urban planning lecture.

Despite his flaws, as Ben Lorber argued last week, Garcia's campaign should not have been dismissed by the Left. Masses of activists were put in motion by the campaign; to ignore them would have been foolish. Given this, Garcia's loss and Emanuel's reelection is a real blow to the city's grassroots movements, and we shouldn't pretend otherwise. Those movements attempted to unseat an incumbent mayor and failed.

That loss, coupled with the effects of what will likely be another four years of brutal neoliberal governance—more privatization, more attacks on unions, more defunding public institutions while funneling public resources to the already wealthy—may discourage and demobilize union and community activists, some perhaps permanently.

All that said, Chicago's grassroots movements may have more reason to be optimistic than ever before.

This isn’t just post-election spin to try to make progressives and leftists feel better: It's undeniable that Chicago progressives have made serious headway on multiple fronts.

All eight members of the city council's Progressive Caucus up for re-election won, and at least two new caucus members were elected. Three additional candidates who would join the caucus, Milly Santiago, Tara Stamps, and Sue Sadlowski-Garza—the latter two both rank-and-file CTU members—were in races that were too close to call as of late Tuesday night. The caucus often supplies the lone “no” votes to Emanuel’s agenda in a sea of rubberstamp aldermen. While the caucus's members can sometimes be unreliable, for anyone who doesn't want to see the mayor's neoliberal measures glide through a 50-member city council completely unchallenged, the results are heartening.

What's more, as I explained yesterday in The Nation, those progressive unions and community organizations have formed a new political organization, United Working Families, that seeks to train and run long-term movement activists as candidates and create a political home for themselves outside of the Democratic Party.

They are currently mulling whether to form a local third party and have created several neighborhood-level "independent political organizations" that could experiment with what such a politics might look like—one of which may come from the leftover campaign infrastructure of Tim Meegan, another rank-and-file CTU teacher who ran for office, losing by less than 20 votes despite being a first-time candidate up against a legendary Chicago political machine family.

Candidate shortfalls aside, it's also important to recognize that Chicago has never seen anything like this mayoral campaign. No incumbent mayor has ever been forced into a runoff. Even competitive mayoral elections are rarities. This is an achievement for a political coalition that was vastly outspent and testing out a movement-based electoral model for the first time.

Yes, Chicago's movements endorsed a mediocre candidate for mayor and failed to elect him. But that movement wasn’t relying on a Garcia victory: It focused on other political offices that can shore up progressive political power in the short term, and laid the infrastructure for a new independent politics in the longer term.

Garcia could never quite figure out what time it was in Chicago. But the city's movements have operated under a strong sense that the time is theirs. Taking stock of those movements' accomplishments after last night's elections, it seems it still is.