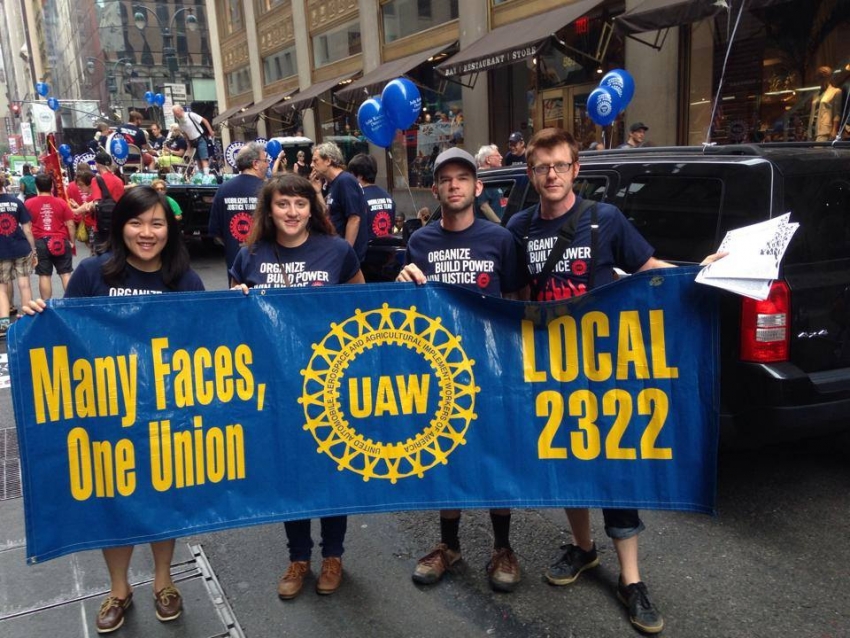 These efforts date back to the 1960s. Graduate student-workers at UC Berkeley unionized during the Free Speech Movement in 1964; in 1969, graduate student-workers joined the faculty bargaining units at CUNY and Rutgers, followed closely by University of Wisconsin-Madison’s Teaching Assistants Association, who gained recognition independently of faculty in the same year.

In other words: graduate unionization is not a passing fad, but a movement over half-a-century old.

Given the rich history of student-worker organizing—in and around the New York metropolitan area and around the country, in addition to the highly-publicized, vibrant organizing of private-sector universities challenging the 2004 NLRB decision that has been ongoing in the region for the last two years—we find it disturbing and frustrating that the New York Times failed to interview a single graduate student-worker for its recent op-ed series “Room for Debate” on the graduate and contingent labor movement.

Instead, the Times chose to interview university administrators and faculty, some of whom dismiss student-worker unionization as “naive” and disruptive of “delicate balances.” While we welcome the Times’ late entrance into the debate over graduate student unionization, in order for such a debate to take place in earnest, student-worker perspectives must be included.

Over the last two decades, the struggle of adjunct faculty living in poverty has dominated the conversation about the quality of undergraduate education and academia as a viable career path. For fledgling academics in graduate school, it has become impossible to avoid the stories of adjunct professors living out of their cars, struggling to collect enough money to eat, even dying from lack of institutional support.

A headline from the popular academic community blog Vitae encapsulates the bleakness of the adjunct life: “Suicide is My Retirement Plan.” This is the utterly disempowered and dark career path and university environment that many of us stand to inherit.

Unions offer us an alternative set of possible futures, all of which are brighter than the present. Through collective bargaining and collective action, we fight against the increasing corporatization of the university. The material benefits and improved working conditions we achieve through our collective efforts are also important for high-quality academic instruction and research, since we can’t produce good work if we have to take on many additional jobs to make ends meet.

In many respects, the graduate student-worker movement functions as a training ground for tomorrow’s adjunct and faculty organizers. Taking part in collective bargaining as graduate students teaches us how neoliberal-era colleges and universities actually work, and the key role contingent labor plays in supporting these institutions. Through engaging in graduate unions, we learn crucial skills for building effective organizing campaigns, negotiating strong contracts and standing together across disciplines.

The importance of unions goes beyond worker education. A strong, collectively-bargained graduate employee union contract protects the most vulnerable grad student-workers from abuse and makes an academic career possible for a wider range of people. Academia can be a deeply discriminatory and precarious place for women (especially with families), LGBTQI people, people of color and people living with chronic illness and disabilities. (See the anthology Presumed Incompetent for some staggering examples.) “Just cause” provisions are a hallmark of union contracts, and protect workers from arbitrary or capricious hiring and firing decisions; contracts also frequently offer protection from sexual harassment, retaliation and other forms of mistreatment in the workplace.

Unions can also negotiate economic benefits like living wages and more affordable healthcare. Many graduate employees without unions live on poverty wages. Without a good health insurance plan, they may be forced to choose between taking care of their health and eating or paying rent. Some graduate students may be able to rely on families or spouses to support them during their graduate education, but this is a privilege that not everyone has or can access. Graduate student-workers are often forced to take on student loan and/or credit card debt to survive. Unions allow graduate student-workers to fight for wages and benefits that allow them to survive independently of their families without taking on debt. This is crucial for keeping graduate education accessible to people from all socioeconomic backgrounds.

The only “delicate balances” that stand to be “upset” by graduate employees and other contingent academic workers attaining full collective bargaining rights are the deeply uneven balances of power and capital that have allowed higher education to plunge further and further into an employment crisis over the last two decades. We believe that all workers deserve better than poverty wages, poor or nonexistent health insurance, and no job security.

The labor of graduate employees, postdoctoral fellows, and contingent faculty in labs, classrooms, offices and dorms keeps research universities afloat. Unions allow us to leverage the power of our labor to ensure our survival now, that we may build a better future.

Anna Waltman has served as co-chair of GEO-UAW since May 2013, and has worked at University of Massachusetts-Amherst as a teaching assistant or teaching associate (instructor of record) since beginning graduate school in English in 2009. Natasha Raheja is a teaching assistant and Ph.D. candidate in the Department of Anthropology at New York University. She has served on the GSOC-UAW Bargaining Committee and is a member of the social justice caucus Academic Workers for a Democratic Union (AWDU). Natasha is also the director of the documentary Cast in India on the working lives of the men who make the manhole covers in New York City. Shannon Ikebe is a Ph.D. student in Sociology at University of California-Berkeley. He is a member of AWDU and former Northern Vice President of UAW Local 2865, which represents more than 12,000 graduate student workers across the University of California campuses.