A View of Germany’s Economy from Die Linke, the Left Party 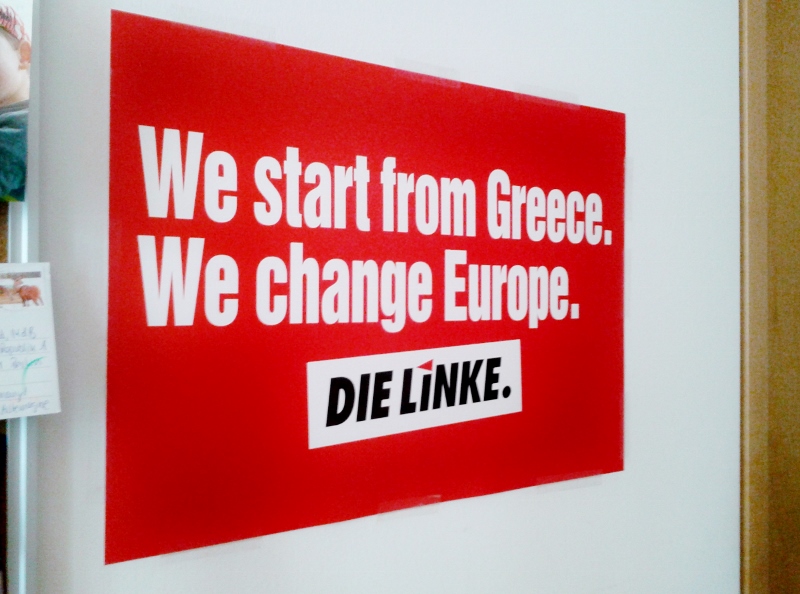 Klaus Ernst, co-chairperson of the German parliament and a member of the German Left Party, Die Linke, discusses labor issues and the economy throughout Europe and Germany. (Amien Essif)

On the wall outside the entrance to German Member of Parliament Klaus Ernst’s office is a picket sign that reads: “We start from Greece. We change Europe.” Underneath it is a large bottle of Champagne sitting atop a bookshelf. Ernst’s secretary assures me the bubbly has nothing to do with the slogan above, but it’s no secret that while it may have unsettled Germany’s conservative chancellor Angela Merkel, the ascendance of Greece’s left party Syriza was a cause for celebration within Germany’s left party, Die Linke, which currently has about 10 percent of the seats in the German parliament.

Klaus Ernst, a former secretary of IG Metall, Germany’s largest union, was an active member of the center-left Social Democratic Party for 30 years until disagreements over a set of neoliberal reforms put forth by the party in 2003 known as “Agenda 2010” led to his expulsion and encouraged him to move leftward.

After joining the Electoral Alternative for Labor and Social Justice—which later merged with other left groups to form Die Linke (the Left Party)—Ernst was elected to Germany’s parliament (the Bundestag) in 2005 and has served as co-chairperson of the party since 2010.

Ernst sat down with Working In These Times to talk about issues effecting workers in Europe’s largest economy.

When the Bundestag was debating the proposed minimum wage law last year, Die Linke was its strongest critic, and the party’s members abstained from voting. Now that the law is in effect, do you stand by this decision?

We were not against having a minimum wage, we were against this form of the minimum wage. First, eight euros and 50 cents an hour is too low—we need minimum 10 euros. Second, there are a lot of exceptions. One exception is that people who are under the age of 18 have no minimum wage. And for some jobs, there are exceptions.

Some unions have also been critical of the minimum wage—a position that many Americans would find hard to understand. Can you explain this?

The Social Democratic Party wanted to create a minimum wage in 2003 when they made the “Agenda 2010,” but the unions didn't want the minimum wage. Why? Germany has a system of collective bargaining between unions and employers. There is bargaining, sometimes a strike and then you have a wage. The unions thought at this time that a minimum wage law was not good for the system of collective bargaining. The unions don't want wages set by the state. They want to fight with the employees and set their own wages.

But in the time since, the unions realized that there are many sectors where it is not possible to come to good agreements, where workers can't strike or bargain. If you don't have strong unionism, the system is out of function and the wages are sometimes very, very low for these people; therefore, the minimum wage is very necessary.

But there are exceptions in the current law for some of those very sectors, like hairdressers.

Yes, that's the problem. And therefore we're critical of this law.

Is there a chance to make the law stronger at this point?

At this time, we have another debate in the Bundestag. Employees don't like to document working time. They say it's bureaucratic, it's a bad rule because of all the bureaucracy and they want to make holes in this law. But if you do not document workers’ time, you cannot pay minimum wage! It's very important to know how long the worker works.

So right now the pressure is in the other direction. We have quite a job just to fight for the law we have now. But at this time our labor minister [Andrea Nahles] says the law won't be changed.

What about companies like Amazon that document everything their workers do, from the time they clock in and out, to the time they spend in the bathroom and checking their cell phone?

The German union Verdi is trying to negotiate pay raises and better working conditions for Amazon workers but so far hasn’t had much success. Do you agree that Amazon poses a problem to the German model of organized labor?

It's certainly one of the largest companies that operate like this in Germany. Normally with the big companies unions have agreements. But Amazon—the wages are very low, and the company doesn't want collective agreements. Amazon says 'We pay what we want.' They say they'll bargain with individual workers but not with a group of workers.

What can you do as a member of the Bundestag to help Amazon workers?

Normally [helping workers] is a job of the union, not politicians. What we can do is make laws to make the unions stronger. One point at which the unions are weak: It's possible in Germany to make contracts for very short periods, three months. And if you have a factory where many people only have three-month contracts the unions are not very strong because the workers are afraid to lose their job. So the Bundestag could make a law that you can only make contracts without limit.

The next problem is the system of temporary work. Temporary workers can work at a company but be employed by another company, and have no rights at the place where they work. If I hire such a worker and I don't want him to come in the next day, he is gone. And therefore Die Linke wants to make a rule to abolish this possibility to hire temporary workers. We don't want a system of renting people.

The recent strikes of the German Train Drivers Union (GDL)—nine strikes in the past ten months—were met with mixed reactions from the public, with some saying that the work-stoppage was excessive, that German unions have too much power to upset the economy. What is your position on GDL's tactics?

Too much power? Unions? No. One journalist in Germany said of the train drivers' strike that it was their fundamental right. The strike in Germany is a fundamental right. Normally, if you have no right in a country to strike, it's not a democratic country. So this journalist says if people don't like this, then they should consider moving to China—there it's not allowed. It's true!

The reason for this strike was that the wages of German train drivers for a long time were lower than in the rest of Europe, like in Great Britain, France, Italy. So the drivers of the train broke away from the larger union and said we'll make our own collective bargaining. The drivers are very well organized, and now they don't want only to organize the drivers but to organize all the service personnel who work in the train. Deutsche Bahn says they only want to make one collective agreement for all their employees, but according to the law, if you have different unions you can make different agreements, and everybody has the freedom to decide what union they belong to. We are a nation of freedom! [laughs] And therefore it is a fundamental right of workers to make unions and to strike.

(Editor's note: Since the interview with Mr. Ernst concluded, GDL ended its latest strike, claiming that Deutsche Bahn has conceded to bargain with GDL separately from the larger union, EVG. Euronews reports that GDL has picked a leading member of Die Linke to be their arbitrator in coming talks with Deutsche Bahn.)

Are these kinds of internal disputes common in Germany?

Yes, it's a problem if the train drivers don't go to work. But every strike is a problem. I was involved in the longest strike of automotive workers in 1984, seven weeks of reduced time of work. That was a big problem because not only the workers in the metal factories cannot work, others cannot work either. The car cannot be made. That's the idea of the strike, to make problems for the employer, he must feel it. He must, in the evening, look in his safe and say “Nothing is in here!” [laughs] That’s the strike. So I have no problem with what GDL is doing.

By some measures, Germany has demonstrated the strongest opposition to the EU-US trade deal known as the Transatlantic Trade and Investment Partnership, and German Vice Chancellor Sigmar Gabriel has promised that Germany “will not accept any pressure for further liberalization or privatization. We won't lower any social, environment or consumer protection standards.” Do you believe this is true? What is Die Linke’s position on TTIP?

My party is against TTIP.

Not against any agreement, but against the direction this agreement is taking. Now I think there will be more and more who are against it. Why? There are three points. The first is that all of the talks have been secret. The parliamentarians, we have no information about the mandate of the European Union. Everything is secret.

Second, TTIP incorporates investor-state dispute settlements. We don't need them. The United States is a state of rights, and the European Union is a state of rights. We don't need special rights for companies who work internationally. For example, when Germany ended its nuclear power program, Vattenfall, which put a lot of money into nuclear energy over the last 20 years, says to the German Republic that they want to be compensated. This discussion was secret. I asked our government how much money Vattenfall is suing for. They said it was secret, but you can go in a special room and see—only see—how much it is. Now we know: 4.7 billion euros.

Who makes the laws? I'm a member of parliament—we make the laws. And the people of the United States, their representatives make the laws. It's not right if a small group of people who are not democratically elected decides what the laws are. What do we need elections for if the laws are not made in parliaments?

The third point is, the regulations in the European Union and the U.S. and Canada are different. In Germany, or in Europe, before a new product comes on the market, you must have many, many tests to see if it's okay for the environment, if it's okay for the people, and so on. In the United States you have other regulations—you can bring a product on the market very quickly. There are different regulation that are not possible to bring together.

Do you feel there is any chance that Germany would vote against TTIP?

Yes, yes, I think there is a big chance. The fight against it will only increase. And not only in Europe.