Daniel Tobin and the Rise of the Teamsters Union 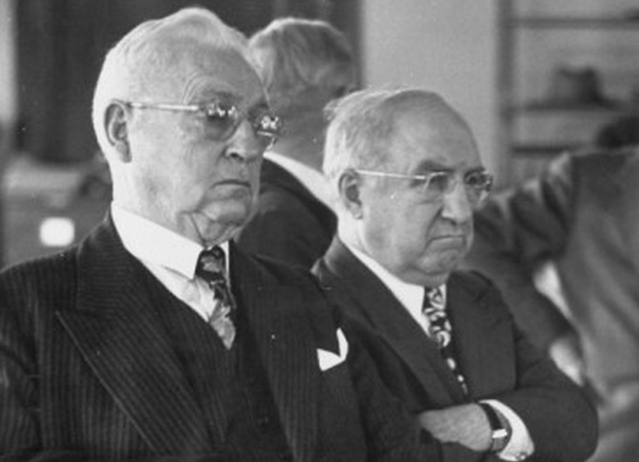 Tobin, left, was the president of the Teamsters for 45 years.

When Daniel J. Tobin was inducted in the Labor Hall of Fame last week, few modern Americans had any idea who he was.

This is understandable, as Tobin, who died in 1955, retired uneventfully from the Teamsters union more than 60 years ago. And even in his heyday as a labor leader in the New Deal and World War II eras, he was overshadowed by more flamboyant union figures like John L. Lewis of the United Mine Workers, or Harry Bridges of the West Coast longshore workers. But Tobin well deserves recognition in the Hall of Fame, according to some modern observers, for laying the foundations for one of the country’s largest and most powerful unions.

What stands out initially about Tobin’s career was his extraordinary longevity as Teamsters president, says Karin Jones, director of the Teamster History Project. First elected as union president in 1907, he would serve in that role until 1952, a full 45 years. Although nominally the union’s second president (the first, Cornelius Shea, was driven from office by charges of criminal misconduct), Tobin emerged as the dominant figure of early Teamsters history, presiding over its astonishing growth—from 40,000 to 1.1 million members—and its development into a truly national organization, Jones says.

With 45 years in office, there is a lot of material to work with, Jones says, so the Teamster History Project has created a special section on the Teamsters web site to educate modern union members on his history at the union’s helm. It traces the evolution of the union from a handful of widely scattered locals of barely organized transport workers into a modern labor organization—with Tobin providing a steadying hand through some turbulent times.

Tobin’s personal story begins as an immigrant’s tale, not unlike famed 20th century union leaders Samuel Gompers of the American Federation of Labor, or Sidney Hillman of the Clothing Workers, or many others.  Born in County Clare, Ireland, in 1875, Tobin’s parents brought him to Boston when he was 15 years old. He seems to have adapted easily to life in Irish Boston, becoming a truck driver and an early member of Teamsters Local 25, which was a union stronghold then and now. His first union office came in 1904 when he was appointed business agent for the local. From there, it would be a rapid rise to the top.

By 1907, Tobin was president of both Local 25 and the regional New England Joint District Council. The International Brotherhood of Teamsters (IBT) had only been in existence for four years, but was in deep crisis over the continued criminal behavior of President Shea, who had allied himself with the notorious Chicago “Outfit.” In a closely fought convention battle, Tobin defeated Shea for election as president by a vote of 104-94.

Like other unions, the Teamsters were buffeted by the shifting winds of the World War I era. Woodrow Wilson, elected in 1914, was far friendlier to unions than any of his predecessors in the White House, and sought active partnership with organized labor in the war years. But the sense of strength and promise of the Wilson years came to an abrupt end in 1920, when the Republican Party regained control of the White House, and the post-war recession hit all unions hard.

The modern Teamsters are proud to say that some important civil rights precedents were set at this early stage in the union’s history, Jones says. For example, in 1906, the union decided there would be no color bar to union membership (as was common in other unions, especially the big railroad unions), nor would the IBT permit segregated locals.

“That’s the reason we had a lot of trouble organizing in the South: We refused to follow the Jim Crow laws,” she says. In 1919, the union embraced a policy of “equal pay for all,” an early affirmation that female workers were entitled to equal pay for equal work, Jones says.

A less generous view of Tobin and Teamsters racial policies is offered by Dan La Botz, an activist, author and journalist who was a co-founder of the dissident Teamsters for a Democratic Union.

“The union was founded as a bunch of white Irish guys like Tobin, and that was the ethnic glue that held it together. In general, they didn’t have black members, or any other minorities, because the unwritten rule among the employer companies was that you didn’t let black men handle machinery,” La Botz says. “It may have been open to integration on paper, but that wasn’t the way it worked in practice, at least not in the vast majority of the locals.”

Union members were hit hard by the Great Depression that followed the Wall Street crash of 1929, and Tobin became an early and enthusiastic supporter of Franklin Roosevelt. A lasting personal friendship developed between the two, contrasting sharply with FDR’s relationship with the Mineworkers’ Lewis, who soured on Roosevelt as the New Deal lost energy in the late 1930s. According to Teamster historian Jones, Roosevelt was offering Tobin a cabinet position as Secretary of Labor at about the same time that Lewis was endorsing Republican Wendell Willkie against FDR in the critical presidential election of 1940.

But the defining event of Tobin’s career was actually the Minneapolis General Strike of 1934, La Botz suggests. Tobin was strongly anti-communist, and was disturbed by left-wing influences in Minneapolis IBT Local 574, led by Trotskyist Farrell Dobbs and the Dunne brothers, Ray, Miles and Grant.  In May 1934, Dobbs and the Dunnes led the Teamsters out on a city-wide strike, which quickly turned violent. Two strikers were shot dead by local police and the strike spread, paralyzing the entire city. Minneapolis was put under martial law and occupied by some 4,000 National Guard troops.

Violence and martial law notwithstanding, the strike was largely successful—one of three general strikes across the country that year. Tobin, however, determined to rid the union of the troublesome Trotskyists and soon succeeded in driving the Dunnes out. Dobbs would stay with the Teamsters for several more years but ultimately quit to work as an organizer for Socialist Workers Party.

According to La Botz, the success of the Minneapolis strike was the moment when the Teamsters should have surged forward, embracing an inclusive strategy of organizing and a more militant approach to defending worker rights. Instead, Tobin pulled the union back, La Botz says, retreating to an overly narrow concept of craft union organization that stressed friendly cooperation with employers and a junior partnership with the U.S. government.

La Botz and others also take Tobin to task for allowing organized crime to take root in the Teamsters over the course of his long tenure. That failure came home to roost for the union after Tobin’s retirement when two of his successors as president—Dave Beck and Jimmy Hoffa—were both driven from union office and jailed, making the union synonymous with organized crime for generations of Americans.

Tobin was never charged with any personal corruption, and the consensus of historians is that he was personally honest, Jones says. But it is undeniable that he looked the other way as gangsters and labor racketeers exercised control of key IBT locals in Chicago, New York and elsewhere.

Vincent Tobin, one of the Dan Tobin’s grandsons, agrees with that assessment, not from personal recollection, but from years of research. The retired lawyer is currently finishing work on the first full-length biography of his grandfather and says that Dan Tobin deserves recognition for leading the union from its shaky beginnings to prosperity and stability.

The Tobin grandson says he has only vague recollections of his grandfather, but was inspired to write the biography as a way to tell the union story without concentrating on the personal shortcomings of men like Beck, Hoffa or others who have been tainted with criminal connections. The national Teamsters organization was a sprawling and complex institution under Tobin’s direction, as it is today, he says, and any president must take responsibility for the failures as well as successes.

Based on the 45-year tenure at the head of the union, Dan Tobin deserves a full-length biography, he concludes—as well as place of honor in the Labor Hall of Fame.