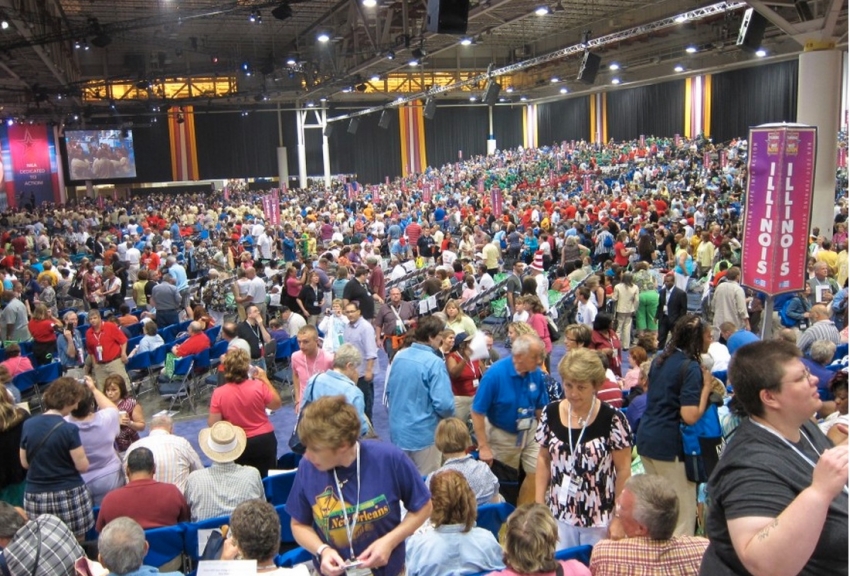 A view of the assembly from Illinois delegation, from which the author proposed a new business item to remove the Confederate flag. (Fred Klonsky)

I was recently in Orlando, Florida, a few weeks after the brutal murder of nine African-American members of the historic Emanuel African Methodist Episcopal Church in Charleston, South Carolina, for the annual Representative Assembly of the National Education Association (NEA), the union I am a retiree member of. Just 12 months earlier, the NEA, the nation’s largest labor union, made headlines when it elected three women of color to its executive leadership: President Lily Eskelsen Garcia, Vice President Becky Pringle and Treasurer Princess Moss. No other labor union in the United States could make that claim.

This year, a conversation about the issue of race and racism took center stage at our NEA annual meeting, and that seemed to be a big deal to me. I thought it was odd, though, that following this year’s Representative Assembly, which took place from June 26 to July 6, there was barely a word in the national mainstream press or the progressive media about what had happened in Orlando.

I was there as a delegate from Illinois. Before arriving I read that an African-American activist, Bree Newsome, had been arrested for bravely climbing a flag pole and taking down the Confederate flag that still waved in front of the South Carolina capitol. I went on social media and suggested that it might be a good idea for the NEA to take some action in support of removing all Confederate flags, symbols, names and memorials from schools and public spaces.

My friends seemed to think it was a good idea. I was sure that my union, a union that had played a crucial role in its support for the Civil Rights Movement of the 1960s, would also support such a proposal.

The NEA leaders were prepared to present a proposal to the Assembly of 7,000 delegates to approve a quarter million dollar campaign aimed at combatting institutional racism. The proposal, New Business Item B, was vague in detail. Its very vagueness may have helped its adoption by a unanimous voice vote on the first day of the convention.

Yet I could see that while no delegate voted against NBI B, many delegates sat on their hands. They didn't participate in the voice vote, and while they were unwilling to openly oppose the leadership’s call for an anti-racist focus to our union’s work over the next few years, they were also apparently unconvinced it was something we should be doing.

I decided that, in addition to the campaign to combat institutional racism, I would submit my own new business item. My item, which I made on the convention floor with the full support of the Illinois delegation the next day, consisted of just one sentence: "The Representative Assembly directs the NEA to support efforts to remove the Confederate flag and all symbols of the Confederacy from public schools and public spaces."

It was at that point that open division among the delegates broke out. We no longer had even the appearance of being unanimous on the issue of race and racism.

"Would this keep me from putting a Confederate flag on my bulletin board?" one delegate asked. Others: "Wasn’t Robert E. Lee morally opposed to slavery?" "Isn’t this a violation of free speech?" "What about Southern heritage?"

The debate format also had the unfortunate consequence of keeping many delegates from speaking at a microphone. Earlier in the day, before the formal debate, delegate after delegate sought me out to tell me their stories of growing up in the South, of facing the intimidation of Confederate flags waving over schools named for Jefferson Davis and Robert E. Lee. And they told even more horrific tales of facing cross burnings and KKK rallies.

These were teacher stories that never got heard by the delegates. But if the NEA is serious about taking up the cause of institutional racism, we should start with sharing these stories of our own members.

The debate at the Representative Assembly on race and racism reflects a change in the demographics of the teaching profession. While all public school teachers feel on the defensive, for teachers of color there is a larger crisis.

Beyond the issue of how we should teach and interpret the symbols of the Confederacy, our teachers union is being forced to address, too slowly, the impact of racism on our own profession and union. Not only is there a failure to recruit teachers of color to the profession, in districts across the country teachers of color are leaving or are being driven out. When Chicago closed 49 neighborhood public schools in 2013, many of Chicago’s remaining African American teachers lost their jobs.

When I asked Lily Eskelsen Garcia, president of the NEA, about the decline in the numbers of African American teachers in cities like Chicago, she called it a scandal. But then she went on to talk only in terms of the general decline in new teachers going into the profession and the general drop in enrollment in college and university teacher preparation programs.

She blamed the decline of new teachers on the corporate reformers’ attack on the teaching profession and teacher unions. But Eskelsen Garcia had nothing to say about the crisis inside the crisis: America’s public school students are majority non-white, and there are fewer minority teachers to teach them than at any time in recent memory.

In Chicago, the percentage of African-American teachers has dropped from nearly half 15 years ago to less than 20 percent today, while 40 percent of Chicago public school students are African-American.

Back on the convention floor, an amendment to my NBI to remove mention of symbols and monuments in public spaces was passed by the delegates over my objection—I preferred a statement that encompassed the whole issue of the Confederate heritage mythology and not one just about the flag. Failing that, I was happy to have my new business item to support efforts at removing the Confederate flag pass overwhelmingly.

Never in the history of an NEA Representative Assembly had so many requests for information been made in response to a new business item. On the other hand, never in my 20 years of attending the Representative Assembly of the NEA has there been such an open and passionate debate about race and racism with educators from across the nation. It was a difficult conversation, as the discussion of race and white racism in America always is.

Illinois delegate Gina HarKirat Harris from Oak Park was at the assembly and shared her thoughts on the debate over the issue of racism and our union on my blog:

We have an opportunity to have the very hard conversations. We started to have them at the RA. A conversation with 10,000 people is difficult. A conversation with the person behind you who voted no is a little bit easier. When I heard [another member of the assembly behind me] say "no," I turned around and said, “It’s a way to declare that we stand for eradicating institutional racism.” She replied, “We haven’t ended racism in all these years, you can’t change people, so doing this is pointless.” To which I said, “There is not an expectation of ending racism. Racism and institutional racism are connected but not the same.

This NBI is about institutional racism, the systems that are in place that continue to create inequalities in education. Racism is a part of it and when institutionalized we end up with systems where a disproportionate amount of students of color, mostly boys are disciplined or placed into special education. And that’s just one example.” “But you can’t make people not be racists,” [she responded.] “But we can have a platform to begin having the conversations that lead to understanding.” She thanked me for explaining what institutional racism is but said she still didn’t think we could do anything about it. She continued to vote no on EVERY other NBI that dealt with race.

The last two decades have seen an increasing assault on public employee unions, with teacher unions taking the brunt of the attack. As has historically been the case, racism and white supremacy have been the soft underbelly of labor solidarity and our ability to fight back. The decline in the number of African-American teachers in urban districts, the too-quiet adoption of the plan to address institutional racism and the contentious debate over the Confederate flag new business item at the NEA national assembly have exposed that soft underbelly once again.

Make no mistake: The debate over race, racism and white supremacy is precisely what the labor movement needs. The Confederate flag debate at the NEA RA was a good thing. But it also may have proven a surprise to the NEA leadership, who saw that in bringing up the issue of institutional racism to its membership, the union could see that our own institution was in desperate need of attention.