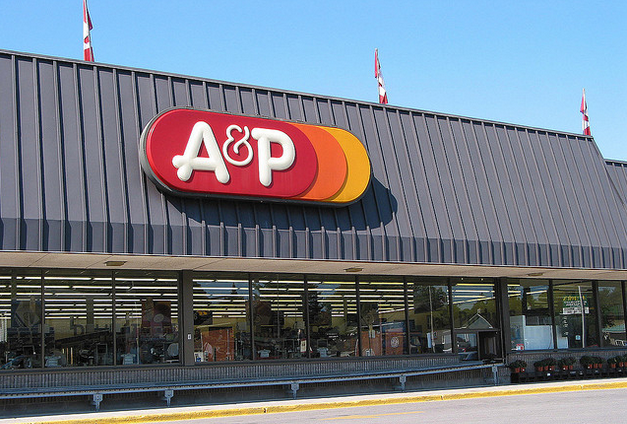 The mass firings of workers at the A&P supermarket chain is set to begin in mid-September, following action this week by a federal bankruptcy court approving a plan to quickly shed some 2,500 jobs at the ailing grocery retailer. The job cuts are a first step in a broader plan to dismember the entire 300-store chain, with expected job losses of 15,000 or more.

First on the chopping block are 1,018 workers at 10 stores in Pennsylvania and New Jersey whose jobs will be terminated September 19, according to official notices filed with state labor agencies. Those job cuts are to be followed in short order by an additional 15 store closings in Pennsylvania, New York and Delaware, where about 1,500 additional grocery workers will be forced on to the unemployment lines in the next two to three months, court documents detail.

Adding insult to injury, A&P managers met with leaders of the United Food & Commercial Workers (UFCW) union last week to inform them that the company did not intend to honor existing collective bargaining agreements, union officers told rank-and-file members. (The contracts cover workers at several chains owned by A&P, including A&P, Pathmark, Waldbaums, Superfresh, and others.) Discarded workers may be denied severance and vacation pay, seniority rules are to be ignored, and a long list of other unilateral contract changes must be accepted by the union, according to an announcement from Harvey Whille, President of UFCW Local 1262 in Clifton, N.J. A&P managers demanded that the union officers accede to concessions, according to Whille’s statement, otherwise the company would go to court to have the contracts revised or cancelled by the judge.

Both A&P and UFCW were tight lipped when contacted by In These Times for additional information and comment. A&P spokesperson Brian Shiver would only say “we’re not commenting.” UFCW Region 1 Director Tom Clarke, who heads a coalition of 12 UFCW locals with A&P contracts, did not respond to phone calls or e-mail messages.

But the message of economic pain is getting through loud and clear to the check-out clerks, produce handlers, meat cutters, bakery workers, and other employees who run the stores on a day-to-day basis.

Linda Maloney, a 14-year veteran of a Pathmark store in Wilmington, Delaware, showed up at work July 20 to learn that A&P had filed for bankruptcy that day, and that the the store would be closed in 90 days. No other information was forthcoming from the store managers, she tells In These Times, but the union representative from UFCW Local 27 informed her that her severance and vacation pay was in danger, as were her seniority rights to be transferred to another Pathmark store. “We don’t know anything. We are waiting,” for reliable information, she says.

Maloney decided to write to Judge Robert Drain, who presided over A&P’s first bankruptcy reorganization in 2010-2012, and is now handing the company’s second bankruptcy case:

I am writing you today so you are aware that normal working people are affected in the Bankruptcy of A&P.

In the last Bankruptcy, we, Local 27 UFCW, gave up 7.5 percent of our pay, gave back a weeks vacation, two personnel days, and gave back two holidays in good faith to make this company stronger.

But the executives either not knowing how or not caring to learn how to run a grocery store kept giving themselves bonuses. For their last, the executives, gave themselves a mega bonus, then days later filed for bankruptcy. This is leaving us, the workers, struggling, with no income or benefits. How is this legal? I am sure that the executives of A&P are sitting pretty and not caring at all about us.

I guess I hope that you will think of us, the workers, who are most affected by this action. Most of us have worked most if not all of our lives for Pathmark.

Maloney says she didn’t get a response from Judge Drain, nor did she expect one. The first 2010-2012 A&P bankruptcy resulted in about 10,000 A&P workers losing their jobs, with all the remaining union workers taking some cuts in pay or benefits. And after all that, it did not seem that A&P managers had any clear plan to restore the chain to health, she says. The managers didn’t seem to know what they were doing, she offers, and “it seemed like they wanted us to fail.”

In a declaration to the court dated July 19, A&P Chief Administrative Officer Christopher McGarry stated that the company currently employs 28,500 people. About 93 percent of these workers are represented by unions, almost all of whom are UFCW locals. There are 35 separate collective bargaining agreements with 12 different UFCW locals.

A&P intends to move quickly to sell or close all of its stores, he continued. Initial arrangements have been made to sell 120 stores to other grocery retailers in the region, and one of the potential buyers, ACME Markets, issued a statement stating that it intended to buy 76 stores in the expectation that sale would be approved by Oct. 15.

Altogether, the 120 stores already lined up for sale employ some 12,500 union workers, McGarry stated. (No plans for the continued employment of the remaining 13,000 workers have been made public). Labor contracts for these workers must be renegotiated in order for the sales to go through, he asserted. Existing seniority rights and other benefits of the existing contracts must be eliminated through negotiation, he stated. McGarry then explicitly threatened the UFCW: “To the extent the Debtors (A&P) and the unions do not reach agreement on these modifications within the requisite time frame…the Debtors…(will) file a motion for temporary relief from the Court pursuant to section 1113(e) of the bankruptcy code and to obtain entry of an order authorizing such relief within 45 days.”

Under Section 1113, federal bankruptcy judges are authorized to cancel or modify labor union contracts, with or without the consent of the workers. The section of the bankruptcy law has been notoriously used in the past to batter unions into wage concessions, job cuts and other givebacks.

In his statement to the members, UFCW Local 1262’s Whille was defiant in the face of the A&P threats. “We will fight as hard as we can to protect what you have earned and deserve, and will do everything in our power to make The A&P Company honor their responsibilities to every Pathmark member and their family.”