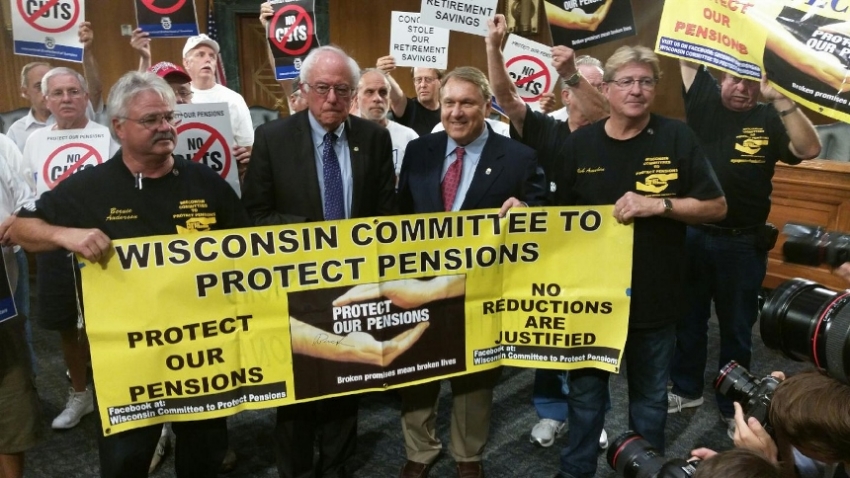 About 300 angry Teamsters descended on Washington, D.C., September 10, demanding federal action to protect the pensions of union members threatened with benefit cuts. The retired Teamsters are among a group of as many as 1.5 million retirees from a long list of different labor unions nationwide that could see their pensions slashed under a new law quietly approved late last year.

The immediate target of the angry Teamsters was the U.S. Department of the Treasury, which is in charge of administering the new law, the Multiemployer Pension Reform Act of 2014 (MPRA). Government officials sponsored the first-ever public hearing on MPRA last week, and the retired workers swarmed the meeting to make it clear they are alarmed and unhappy at the likelihood that the Teamsters Central States Pension Fund is at the top of the list for cuts.

“We’re turning up the heat, and we are going to keep turning up the heat higher and higher” on federal officials and lawmakers, says Bob Amsden, a retired truck driver from the Milwaukee area who has emerged as a high-profile advocate for Teamster pensioners.

Amsden and other union members face cuts because MPRA allows pension fund trustees new freedom to reduce promised benefits in cases where the long-term solvency of the fund is in danger. Under MPRA, any such cuts must be approved by the Treasury Department first, and government officials are currently in the process of writing the rules and regulations of the approval process.

A secondary target for the riled-up retirees, who travelled to Washington from Ohio, Wisconsin and a number of other states, were members of Congress, who are being lobbied to repeal MPRA outright. As reported at In These Times earlier this year, presidential candidate Sen. Bernie Sanders (I-Vermont) is sponsoring repeal legislation that would shore up failing pension funds and protect the income of union retirees.

Following the mass meeting with Treasury Department officials, union members fanned out across Capitol Hill in a coordinated lobby effort aimed at select members of Congress, according to Amsden. The bad news, however, is that the Sanders bill—co-sponsored in the House by Rep. Marcy Kaptur (D-Ohio)—has gained only 23 co-sponsors since it was introduced in June, with no public support at all from the Republican Party leaders who control the majorities in both houses, he reports.

With chances of repeal looking slim, attention is focusing on renowned lawyer Kenneth Feinberg, who has been appointed by Treasury Secretary Jacob Lew as “Special Master” to oversee the process of pension cuts. Feinberg, who took on high profile roles in awarding financial claims related to the 9/11 terrorist attacks and the 2010 Deepwater Horizon oil spill disaster, has made a good impression on the Teamster retirees in his new MPRA role, Amsden says. That extends to Teamsters President James Hoffa, who told In These Times that “Feinberg is going to help us. He’s a good guy … I think he is a fair man.”

Hoffa added that that the Teamsters union if firmly allied with the retirees in demanding MPRA repeal and, in the alternate, to ensuring that any cuts from Central States Fund benefits are designed to protect the most vulnerable retirees. In a September 10 joint press conference with Sen. Sanders, Hoffa revealed “we get calls everyday” at union headquarters from worried pensioners. “One member ... was afraid, and he said 'I'm gonna commit suicide [because of loss of income] … It scared the hell out of us.”

Feinberg has offered retirees assurances that any plan to cut benefits will be subject to a fair and deliberative process, Amsden adds. This has calmed initial fears that cuts would be imposed as early as this year, and current predictions are that no cuts can go into effect until mid-2016 at the earliest, he says. Retiree groups have received further assurances that they will be consulted on a regular basis as the process moves forward.

Almost all the attention last week was on the Teamsters and the Central States Pension Fund, but MPRA applies with equal force to any union pension plan that is in financial trouble. No other pension plan has received the same public attention as Central States, but some experts believe there are 100 to 200 other union plans that could be subject to cuts in the future, directly affecting up to 1.5 million retirees.

"And believe me, the retirees here (at the Sept. 10 public hearing) represent only a fraction of those affected. Hundreds of thousands of retired food workers, bricklayers pipefitters and other retirees are also in danger of losing up to 60 percent of their pensions. Most of them just don't know it yet," said Karen Friedman, Executive Vice President of the Washington-based Pension Rights Center. "This isn't just unfair—it is outrageous and undemocratic."