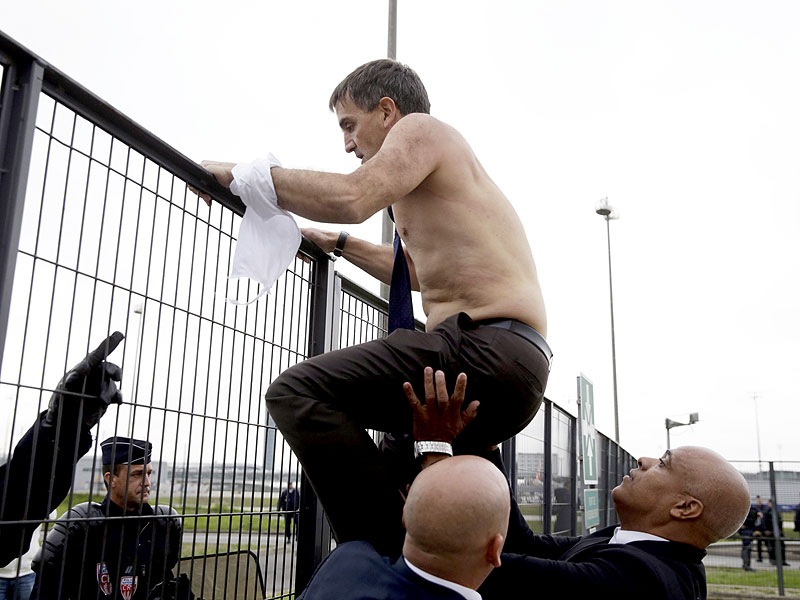 An Air France executive, his shirt in tatters, escapes a group of angry workers earlier this month. (Euro News / YouTube)

“A picture has held us captive. And we cannot get outside it, for it lay in our language about France and it has been repeated inexorably.”

Well, this is not what Ludwig Wittgenstein precisely said. Nor did the 20th century’s most enigmatic philosopher have in mind the photos of shirtless Air France executives scrambling up a fence to escape an irate crowd of employees earlier this month. Nevertheless, his observation about the power of images is du jour. While they will not be turned into key chains or postcards, these images have become emblematic of a certain idea of France and French working class militancy in the minds of many around the world.

And yet, the undeniable violence of this event obscures a different form of violence. It is a kind of violence less striking and more resistant to being struck as an image, but equally grim and despairing: the slow, incremental, and deadening violence done to workers whose livelihoods are under constant threat, whose options are increasingly limited and whose traditional parties seem either incapable or unable to help.

One could foresee the collision between Air France management and workers on October 5. First, there were the recent strategic errors made by Air France, failing to foresee the challenge posed by low-price carriers like Ryan Air for short-haul runs across Europe and rise of money-rich Gulf airlines over the growing and profitable longer routes. While Air France showed something of a rebound by 2013, a prolonged strike by the pilots union in 2014 sent its finances into yet another nosedive. The company hemorrhaged more than 600 million euros in the first half of 2015, with little prospect of lessening the hemorrhage in the second half.

A second cause was the intransigence of the Air France pilots. In the negotiations that flamed out in early October, the pilots’ union refused to compromise on a series of labor practices that would align them, both in terms of hours flown and the length of layovers, with other European carriers. Though pilots constitute 8% of Air France’s workforce, their pay makes up more than 25% of the company’s salary costs. On average, Air France pilots fly 630 hours, while Lufthansa and British Airway pilots average 750 hours, and Ryan Air upwards of 850, while their salaries are roughly equivalent.

In effect, the pilots were asked to increase their cockpit time by 10% without an equivalent wage increase. The KLM pilots union—the more profitable Dutch carrier merged ten years ago with Air France—urged their French colleagues to “take this step so that we can all move forward.”

The Dutch appeal for moderation went unheeded. When talks with the pilots union stalled, management abruptly ended the negotiations and unveiled its “Plan B.” The company would drastically reduce its freight business—retiring fourteen of its cargo planes—and eliminating five of its routes. No less drastic are the human consequences. To carry out the necessary restructuration, nearly 3,000 jobs would be slashed by 2017, the sickle slicing almost entirely through the ranks of the support and ground crews.

When the negotiations between the pilots and management broke off, the ground-workers unions were as furious at the one as the other. The union’s claim that this provides a higher guarantee of safety struck them as both false and self-serving. Laurent Berger, the leader of France’s largest trade union, the Confedération française démocratique du travail, denounced the pilots’ refusal to compromise. By refusing “to consider the predicament of their fellow Air France workers,” he exclaimed, the pilots had “torpedoed the trade unions.”

Torn between bewilderment and bitterness, he declared that the pilots could have avoided this showdown, but instead decided to leave the ground-workers holding the bag: “It’s detestable!” Jean-Claude Mailly, the leader of a second union, Force Ouvrière, echoed Berger’s frustration. Urging the pilots to maintain labor solidarity, Mailly pleaded with them “to communicate with the other unions.”

On October 5, Air France’s division of human resources convened a meeting at its corporate headquarters to discuss the implementation of Plan B. Already battered by earlier restructuring efforts, hundreds of Air France ground-workers gathered outside the building to protest the purpose of the meeting. Unnoticed by security personnel, a few dozen workers made their way into the building by a side entrance and burst into the meeting room.

The confrontation turned into a scrum, during which workers tore off the jackets and shirts of two executives, Xavier Broseta and Pierre Plissonier. With the help of security personnel, as well as other workers, the two frightened men managed to leave the building and scale the parking lot fence to safety.

While the international media feasted on images of this event, the French government reacted immediately. On an official visit in Japan, Prime Minister Manuel Valls assured France—not to mention Air France, nearly one fifth of which is owned by the French state—that the voyous, or thugs, responsible for the scuffle would be “harshly punished.” In a tweet, the economy minister Emmanuel Macron, also in Japan, relayed his shock over the event, denouncing the “unacceptable violence” shown by the Air France workers. The government made good on its vow of swift justice: at dawn on October 12, five workers suspected of leading the scuffle were arrested at their homes and charged with assault and battery.

While most of the political class applauded the arrests, there were also discordant voices. In a televised interview, Jean-Luc Mélechon, the fiery former Socialist who now leads the Parti de gauche, urged Air France workers not to be intimidated by the arrests.

“Start again,” he encouraged them: “Don’t surrender, and don’t be afraid.” As for the arrested workers, Mélenchon grandly declared: “I’d be glad to take their place in prison.” Even Mélenchon’s allies rolled their eyes over their colleague’s offer. As Julien Dray, a leader of the leftwing dissidents within the Socialist Party, drily noted: “It’s easy to say that you would willingly go to prison, all the while sitting in a television studio and knowing full well you will not go there.”

But Dray, along with several other leftwing politicians and observers, has also underscored the odd and discomfiting sight of a Socialist government mobilizing its rhetoric and resources to support Air France’s executive board and slam its employees. Laurent Bouvier, a columnist with Slate France, remarked that the violence of political reactions to the events at Air France was equally shocking.

“To side entirely with Air France executives without a word for the workers whose jobs are now threatened by the company’s flawed decision-making reflects a tragic divorce from social realities.” More laconically, a columnist with Le Parisien, Jean-Marie Montali, noted that the scuffle “makes us lose sight of another act of violence: the loss of 2,900 jobs.”

Tellingly, in a survey published last week by the French polling institute IFOP, while 38% of the respondents condemned the workers’ violence out of hand, 54% replied that though they did not approve of the violence, they nevertheless “understood” why it happened. How could it be otherwise, given the seemingly irresistible rise of unemployment in France—the toll of those who cannot find jobs now hovers at 10.3 percent—and the impotence of the Socialist government to reverse the trend?

A video revealing this tragic side to the events of October 5 has since gone viral in France. It depicts a young Air France employee, Erika Nguyen Van Vai, who had wandered into another meeting room at corporate headquarters during the confusion of that day. Finding herself face to face with several Air France executives, Van Vai, a single mother, tries to engage them in a dialogue. Repeatedly asking them for the criteria they were using for Plan B, repeatedly emphasizing the sacrifices she and her fellow workers had already made, and repeatedly stating her pride to wear an Air France uniform, she is met with silence and frequent sardonic smiles. As Van Vai later observed, “I felt humiliated by their response.”

It may well the image of this worker’s tears as she failed to elicit a response from Air France executives, which elicited a new response from the president of Air France, Alexandre de Juniac. On Sunday, he announced that just 1,000 positions would now be cut through voluntary retirements in 2016. Whether this reflects a change in the adversarial relations between management and workers at Air France, or simply a tactical retreat, remains to be seen.

Robert Zaretsky is a Professor of History at the University of Houston in the field of modern European intellectual and cultural history. He is the author of A Life Worth Living: Albert Camus and the Quest for Meaning and Boswell’s Enlightenment, and is at work on a book on the friendship between Catherine the Great and Denis Diderot. He is a frequent contributor to the New York Times, Foreign Policy, Los Angeles Times, International Herald Tribune, Le Monde Diplomatique, Chronicle of Higher Education, and the London Times Higher Education Magazine. He is the history editor for the Los Angeles Review of Books and a monthly columnist for the Jewish Daily Forward.