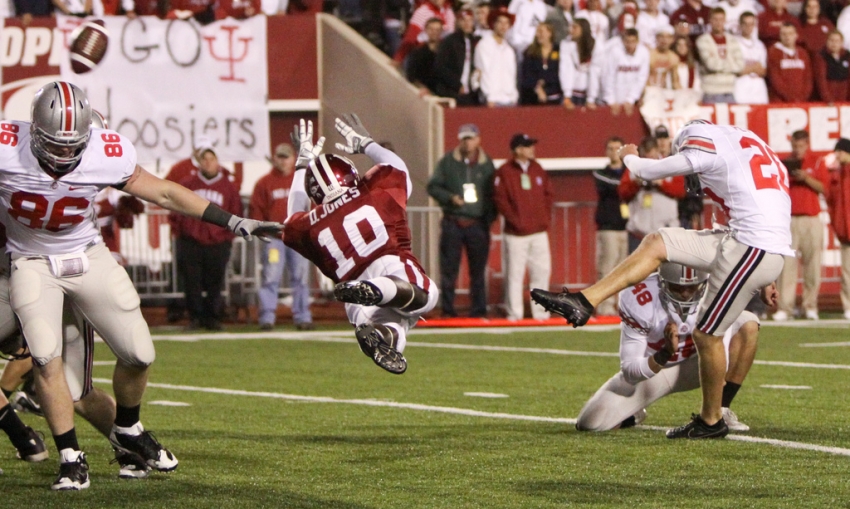 Last month, an In These Times feature by Mr. Gilbert M. Gaul suggested that an athletic arms race has diverted considerable sums of money from the primary purpose of universities—education—to football programs. The implication was that collegiate football programs were, in part, undermining the commitment to education. The University of Texas, after all, “spent $261,728 on each of its football players, but just $20,903 on each student.”

The feature wrongly conflated two real issues: one related to college sports and one separately to higher education.

The first issue that this piece misses entirely is that college athletes are, at present, severely undercompensated for the value they provide. The second, and larger issue for the public, is that students at public universities are “fight[ing] over crumbs” due to fiscal constraints imposed by (generally conservative) governors and legislatures.

Football programs are not the (only) culprit

Do the math and we see that expenditures on the football program account for a little over 1 percent of the University’s total expenditures—the equivalent of one yard on a football field.

While the budgets of athletic departments at other universities—such as the University of Texas—likely account for a larger share of total university expenditures, it is still a small fraction. For academic students who are “fight[ing] over crumbs,” football programs are hardly the only areas that are responsible for this unfortunate state of affairs.

The first issue Mr. Gaul’s article misses is that college athletes are in fact underpaid.

This is what In These Times readers should actually be outraged about—workers who are not being compensated fairly for their labor and are forbidden from forming a labor union. While Gaul notes that “[p]layers are student-athletes, not professionals” by law, in practice they are almost no different from any other employee– especially in a sports labor market.

The tasks of a “student-athlete” and the university’s control over the player check off every box required to be classified as an employee-employer relationship. Sure, they attend classes and receive a scholarship for their role on the team. But many other students receive full academic scholarships, and also work at the dormitory cafeteria or at a bar on campus. Scholarships do not preclude students from reaping the fruits of productive labor – except in highly profitable collegiate athletics.

Collegiate athletes entertain fans for far below their market value as a result of NCAA price-fixing. In nearly all organized sports, a “monopsony” exists and owners (or universities) fight against an open free-market system.

It is the players and their unions who fight for a modest share of the billions of dollars they generate, for good working conditions, and for health insurance so they do not have to pay out-of-pocket expenses when they are injured while performing in front of 60,000 fans. The current University of Texas football roster lists 115 players, so $261,728 spent on each of its players translates into $30.1 million. Meanwhile, the total (2013) revenue for Texas’ program was $103.8 million. That’s 29% of total revenues, which those players generate.

In other sports leagues, player salaries account for roughly 50% of total revenues. In the U.S. labor market, labor compensation accounts for more than 60% of total GDP!

In fact, as noted in the piece, much of the football expenditures were spent on facilities, marble flooring, players’ lounges, and other items that economists would call “capital.” The real outrage is first that Texas spent too little relative to the value the players produce, and second that the players—as workers—didn’t capture a larger share of that spending.

The money goes into capital, where it depreciates. It does not go to labor, where students—proportionately poorer and more African-American—would spend it back into the local economy.

Recent estimates suggest that an average college basketball player is actually worth $375,000 per year and an average college football player is actually worth $178,000 per year– and far more for big-time sports programs like Texas. And, as Andy Schwarz at Slate points out, the argument that “[t]he 60-plus other schools that play Division I … lose millions of dollars each season” is flawed. School accounting practices cook the books in an effort to look poor and 17 schools entered the FBS in the previous 17 years without a single one exiting—hardly what we would expect from a “failing” industry with negative net revenues.

The second issue is the larger one—politics. Across the country, higher education funding has been slashed. From 2008 to 2014, state spending per full-time student was cut in 48 states. Economics writer Ben Casselman reports that, as state funding dropped across the country, college tuition increased in tandem. In Wisconsin, for example, state funding fell by $1,401 per student. Meanwhile, the sticker-price tuition cost rose by $1,530 per student. Help was not on the way for college students and their families in the Badger State, as Governor Scott Walker (R) cut an additional $300 million from the University of Wisconsin System. Meanwhile, in border-state Illinois, Governor Bruce Rauner (R) has threatened to slash state funding of higher education by one-third, causing “great harm to students and to Illinois residents” according to university leaders.

Casselman notes that the shift in cost from taxpayers to young college students has been a long-term trend since at least the late-80s. This is despite the fact that Robert Bruno, Professor of Labor and Employment Relations at the University of Illinois at Urbana-Champaign and I find that improving the share of the population with a bachelor’s degree is one of main factors that definitively boosts employment in a state. Even though we know that a “well-educated workforce is key to state prosperity,” governors and legislatures across the country have decided not to fuel this particular investment engine of long-term economic growth.

Ultimately, the main reason that students fight for crumbs at universities is that state legislatures and governors have and continue to cut funding substantially, raising tuition costs—which increases the burden on poor college students and their families. Attributing this fight for crumbs to college football programs that account for a tiny fraction of total university expenditures is a diversion (or a scapegoat) from the real problem.