Labor Law Is Failing Us. It’s Time To Push for a New Labor Act. 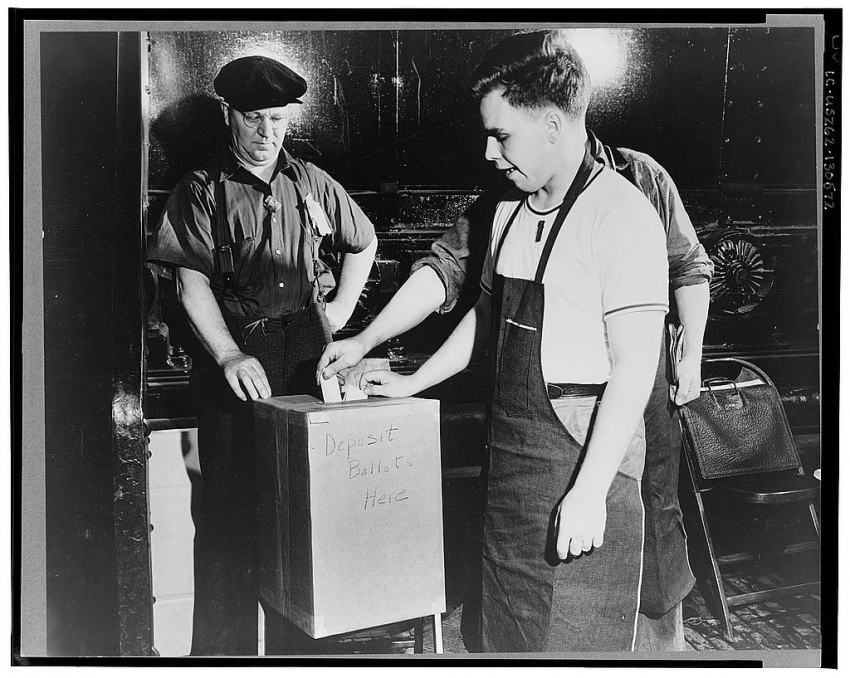 Auto workers at the River Rouge auto factory in Detroit submit their ballots for a union. (Library of Congress)

The Employee Free Choice Act (EFCA) was a bad bill, and it is deader than dead. It is time for labor to propose a comprehensive set of amendments to the nation’s primary collective bargaining law, the National Labor Relations Act.

EFCA would have guaranteed a union’s right to a first contract, imposed punitive fines on employers that break the law and certified new union bargaining units by card check. EFCA was labor’s stalking horse for years before it effectively died when the Tea Party congress took office in 2011. It was our primary way of articulating to allies and legislators how the law stacks the deck in favor of the boss. It was our main vision for reform, membership growth and power.

Our allies look to the unions for our plan to restore workers rights in this country. If we don’t propose a new workers law, they will continue to flog the dead horse of EFCA.

The problem with EFCA was that it was too narrowly conceived and the card check proposal was a blunder. Industry pounced on it, waging a high-priced media campaign decrying how un-American it was that unions wanted to do away with the supposed sanctity of the secret ballot in certification elections. Nevermind the fact that such elections are a farce that would make Vladimir Putin blush; that the boss gets to draw up the voter list and watches every employee walk into the voting booth after having spent months threatening their jobs if they vote against his wishes and just generally scaring the shit out of people. (Although, having written that, it occurs to me that I’ve described a very American way of conducting an election. But I digress.)

The media onslaught had the effect of temporarily degrading public opinion of unions, and Obama did not prioritize the bill during the two years when his party controlled Congress. But Obama’s indifference did labor the favor of sparing us the humiliation of not gaining significantly more new members had EFCA passed.

I’ve organized under public sector card check systems, as well as under private card check agreements. It’s nice. It’s also more democratic. But, at best, card check helps workers who already want a union and who are already working with a union’s organizing department to possibly side step some of the worst parts of a boss fight. Creating the conditions for the great upsurge in union membership that this country badly needs will require more than a narrow tweak of the law.

But narrow tweaks are all that labor seems to put forward. In the Clinton years, unions merely sought a ban on the permanent replacement of strikers. Like Obama, Clinton failed to prioritize labor law while he had a congress he could work with. Today, the closest thing that unions have to a proposal for labor law reform is actually an amendment to federal civil rights statute. Richard Kahlenberg and Moishe Marvit’s proposal to make union organizing a civil right is a tacit admission that the labor act is just too difficult to amend. It is.

For 30 years after the passage of the 1947 anti-union amendments to the labor act, full repeal of Taft-Hartley was labor’s main legislative goal. George Meany’s AFL-CIO campaigned—unsuccessfully—for repeal like a special interest. There was little recognition from the broader progressive movement that Taft-Hartley—which carved workers out of coverage, restricted unions’ ability to engage in solidarity job actions and legalized “right to work”—was designed to kill the labor movement and had, in fact, kicked off the long, slow decline that are we still experiencing.

Our new reform proposal should aim to undo the worst of Taft-Hartley.

There will be no significant labor law reform for many years. Washington will remain gridlocked, and even if the Democrats did control all branches of government, they won’t move on our bill without a huge amount of pressure. This sad political fact should liberate us to propose a sweeping bill that gets at the heart of what constitutes economic power and civil rights. We should emphasize reform proposals that demonstrate how corporations want one set of rules for working people and another one for themselves. Here are some ideas for how to do just that.

Equal time. Why do bosses get to force employees to sit through mandatory anti-union presentations where lies by omission and outright lies are presented with no debate or challenge? The original Labor Relations Act declared it the policy of the United States to encourage collective bargaining, and to restrain employer interference with workers’ organizing rights. The concept of neutrality was inherent in the law. Employers successfully argued that it was unconstitutional for the government to prevent them from saying anything at all about their opinions on unionization. Employers now use their constitutionally protected dog-whistle speech to terrorize employees out of wanting a union. (Riddle: When is a threat that you will lose your job if you vote for a union not a threat? When it is phrased as a prediction of what might happen if a union forms and the company becomes “uncompetitive!”)

Fine, you have a right to free speech. But what right do you have to make your employees attend a “debate” where only the representatives of the “no” option can speak? An equal time provision for mandatory discussions of unionization, that made the non-invitation or non-attendance of a “yes” representative an unfair labor practice could serve to end the practice of captive audience meetings altogether. Regardless, think of the fun of making Rick Berman or the Chamber of Commerce defend the propriety of a restricted, one-sided “debate.”

Financial penalties. Don’t do the crime if you can’t pay the fine. Seems perfectly reasonable, right? Unfortunately, the NLRB is limited to remedies that “make whole” an employee who is fired for union activity. Worse than that, technically the Board is supposed to subtract any unemployment insurance or other wages made in the interim from a back pay award. So, if an employer fires a union leader on the eve of a union election, his only punishment is to pay what he would have paid anyway minus whatever the employee was able to scrape together while waiting to get her job back.

Obviously, this incentivizes employee terminations during an organizing campaign, as the fine is far cheaper than bargaining wages and benefits increases for all the workers. EFCA contained a provision for real fines against employers who fire union activists, but that didn’t get enough attention over all the noise about card check. This provision should be a focus of future legislative efforts. There is no shortage of workers who can testify about how horribly they were treated by union-busting employers, and these stories must be told.

But why limit fines to cases of termination? Any violation of the act, particularly egregious on-going violations, should face a potential remedy of fines. The NLRB would be entirely self-funded if it could impose fines for the rampant violations of the act that employers commit. Hell, it could be an income generator for the entire federal government. And what would employers’ argument against financial penalties for breaking the law be? It couldn’t be anything more sophisticated than “we just think we shouldn’t have to take this law seriously.”

Organizing rights for supervisors. The idea that supervisors are not workers and don’t belong in a union is an ideology that was foisted upon us by Taft-Hartley. The prohibition on organizing rights for supervisors was inserted into the law at the request of the auto manufacturers who were deeply disturbed that their foremen had begun to form unions of their own after WWII. First-line supervisors are rarely given enough decision-making authority to be an actual boss and, prior to 1947, unions counted them as members (still do in some public sector units, and contracts where the boss agrees to look the other way).

These days, the questionable “supervisory status” of certain workers is used to force hearings that delay union elections and tie unions up in knots over concerns that “supervisory taint” of union activists ruled out of the unit could cause a successful union election to be over-turned. The bloat of middle management is one of the major inefficiencies in the U.S. economy – and union avoidance is a primary culprit. Give supervisors organizing rights. Give the workers that they nominally supervise a vote on whether they would be in the same bargaining unit or not.

Restore solidarity rights. Taft-Hartley placed severe limits on unions’ ability to engage in what, in mid-century shoptalk, is referred to as “secondary boycotts” or “hot cargo agreements,” but which the layman might simply understand as solidarity activism. Imagine a world where Yuengling busted their union (you live in that world; the year was 2007). Shouldn’t members of the UFCW have the freedom to refuse to touch that scabby piss-water and keep it off the shelves of your local grocery store?  Now, imagine that workers at a Chinese sneaker factory go on strike. Shouldn’t members of the ILWU be free to refuse to help unload those dirty goods from the shipping containers, and Teamsters free to refuse to put them on their trailers? Before 1947: sure. Now: totally illegal.

Imagine the power we would have if workers could actually support each other’s organizing efforts across industries, and if companies who profit from the exploitation of “secondary” employers were brought to account for their complicity. Here’s the kicker: American consumers are subjected to secondary boycotts all the time! Usually it’s in the form of a cable company cutting off its subscribers’ access to a cable sports channel in a pay dispute. If the American people can understand and tolerate the one kind of “secondary” boycott, then they surely could tolerate the kind that’s actually in their economic interest. Alternatively, it should all be made illegal, and all cable companies should be compelled to carry every conceivable cable channel on their network for all consumers at all times.

Ban "right to work." The Taft-Hartley amendment allowed states to pass so-called “right to work” laws that prohibit unions from negotiating an agency fee in shops where they are compelled to represent everyone. Initially, only the former slave states passed such laws. The Republican governors in states like Wisconsin and Michigan who have recently rushed these attacks on unions through their Republican legislatures have revealed the RTW agenda to be a nakedly partisan act. They’ve done us the favor of creating an opening for a serious proposal that union rights should be the law of the land and not the plaything of ALEC. It is time to ban “tight to work.”

The AFL-CIO should initiate a broad debate on what the “workers’ law” of the 21st century should look like, and all involved in the endeavor should shun cute or simple solutions. We’re gonna be out in the wilderness, politically speaking, for a while. Let’s not domesticate our demands for restored rights and powers too easily.