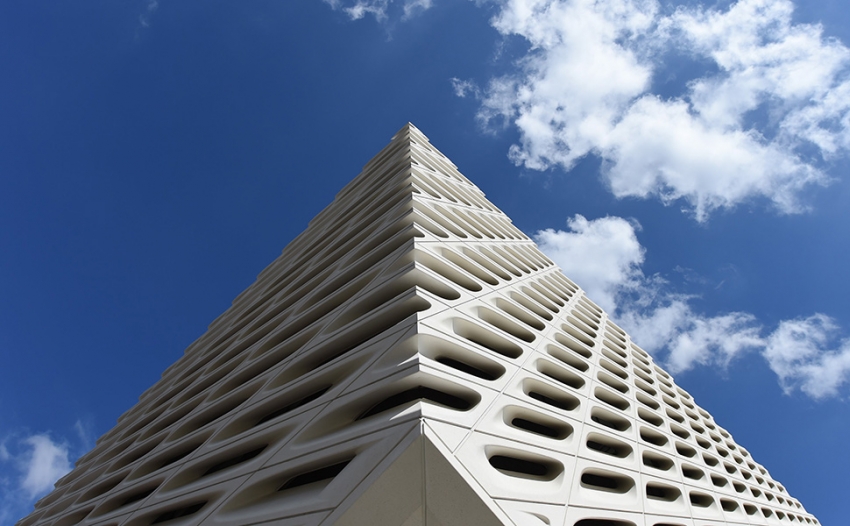 The Broad, an immaculate white postmodern structure, is the latest architectural jewel representing the revival of downtown Los Angeles.

The self-titled museum is a “gift” from Eli Broad, the billionaire Angeleno property developer-turned-philanthropist. Broad is attempting to use his gifts to the arts and a high-profile push to shake up the city’s education system as a way to etch his name deep into the streets of Los Angeles.

But Broad’s philanthropy is two-faced. While publicly making dramatic, self-aggrandizing gestures supporting Los Angeles’ poor children and their schools, Broad’s private business practices and political machinations cripple the very communities he claims to support. The $140 million museum, meant to be a symbol of Eli Broad’s public largesse, is actually a symbol of his philanthropic hypocrisy.

The man who wants to transform public education by bringing market discipline to schools has no problem gorging at the public trough to beef up his namesake museum.

In 2011, Broad syphoned off $52 million of public tax dollars meant for Los Angeles’ poor communities to subsidize his museum’s parking garage—more than all of South LA’s 800,000 mostly low-income residents received from the same public fund that year.

For Broad, it’s all about the gestures. While South LA’s schoolchildren fight for a roof over their head, at least they’ll have a nice place to park when they come to see Broad’s personal art collection.

Eli Broad, who is estimated to be worth $7.4 billion, styles himself an advocate for poor black and brown children. Urban education is his pet project. Decrying the underperformance of poor children of color, Broad points the finger at unionized public school teachers and bureaucracy, claiming educators simply aren’t working hard enough to improve academic outcomes. To save the children, Broad wants to reform education along a corporate model—privatizing schools, busting teachers’ unions and imposing punitive accountability systems. Broad is calling for—and helping fund—a complete transformation of the American education system. And he wants it done in his name.

He trains school leaders to apply business practices to schools through the Broad Residency at the Broad Academy, and rewards compliant school districts with the Broad Prize, of $250,000. Broad’s latest headline-grabbing proposal is to pull 50 percent of Los Angeles’ schoolchildren (what one report refers to as “market share”) into privately managed, non-union charter schools over the next eight years.

But as Broad trumpets his self-branded corporate fix to education, his after-school activities actually undercut the communities he purports to be helping.

In 2012, Broad publicly proclaimed his support for California’s Proposition 30—a bill aiming to raise income taxes on the wealthiest Californians to stave off massive school budget cuts. “I do support it,” Broad told the LA Times in an article all about his progressive endorsement. “Those of us that are wealthy like myself should pay more. There are so many human needs in education and elsewhere.”

It was not until two years later that a state investigation uncovered Broad’s scheme. While soaking in public praise for supporting the tax, Broad smuggled $1 million into the Koch brothers’ “dark money” PAC in Arizona in an attempt to defeat the distributive measure.

Broad has no problem directly snatching public tax dollars meant for poor communities, either. The $52 million Broad nabbed for his museum’s in 2011 was intended for blighted areas of Los Angeles—specifically to build affordable housing and clean up toxic waste. All of South Los Angeles, home to exactly the poor communities Broad claims to advocate for, received a fraction of that.

Mounds of research show that the surest way to improve poor children’s academic performance and give them, in the words of Broad’s philanthropic mission statement, “the opportunity to succeed,” is to raise their parents’ income. With nearly a quarter of children in Los Angeles living in poverty and half as “low-income,” one would think a billionaire do-gooder would want to alleviate rather than deepen inequality.

There is no shortage of urgent, venerable causes to contribute to in the city of Angels. Every month, 13,000 Angelenos fall into homelessness. Instead of namesake museums, Broad could launch an initiative to build affordable housing across Los Angeles and ensure that the city’s children never have to face the trauma of eviction and life on the street. Rather than punish teachers, Broad could support labor unions so that single mothers could survive working one job and have time to help their children with homework. Instead of privatizing their schools, Broad could truly invest in poor communities by subsidizing healthy grocery stores in LA’s food deserts, where its easier to buy liquor than lettuce.

But fighting poverty isn’t glamorous. It doesn’t shine like a glitzy, postmodern museum and it’s harder to stamp your name on. So Eli Broad couldn’t be bothered.