As Long As the Supreme Court Is Setting Labor Policy, the Labor Movement Can Never Revive Itself 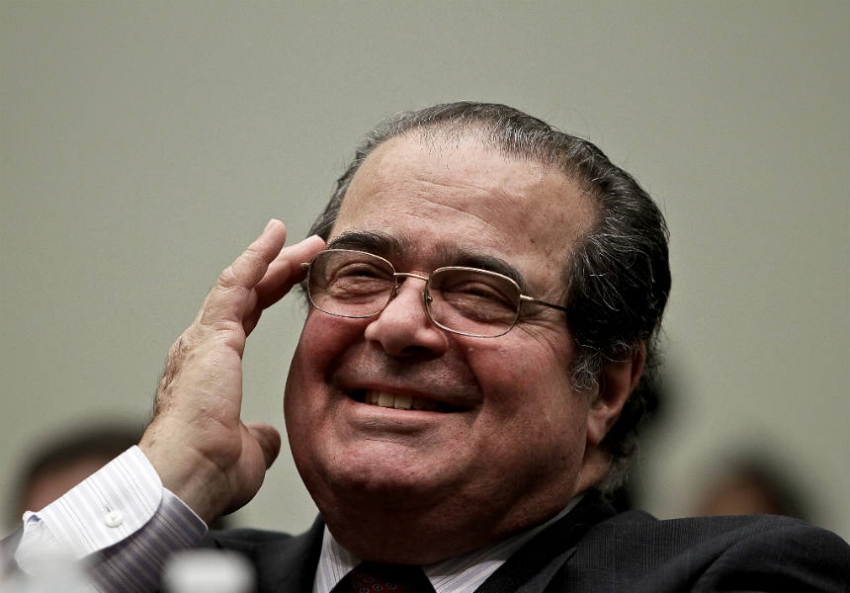 With the death of leading anti-union reactionary Antonin Scalia, the current docket of Supreme Court cases has been thrown into turmoil.

For the labor movement, Scalia’s departure means narrowly escaping the anticipated anti-union decision in Friedrichs v. California Teachers Association. While most commentators expected a 5-4 anti-union ruling, the most likely result now is a 4-4 decision, momentarily leaving intact the agency shop for public-sector workers and preventing the establishment of a legal beachhead for future attacks.

Contrary to those who saw a silver lining in Friedrichs, judges would never have used the precedent to expand the rights of government workers on free speech grounds. Instead, as Moshe Marvit points out, union busters would’ve deployed the rationale in Friedrichs to argue any form of exclusive representation violates public workers’ free speech rights.

This would’ve turned the clock back over 60 years, to a time when all public employee bargaining was suspect precisely because it was deemed political. Additionally, it would’ve only been a matter of time before Friedrichs was applied to the private sector, imposing “right to work” on every workplace in the country.

But for Scalia’s death, a Supreme Court majority would have almost certainly overturned 50 years of settled law. In doing so, five individuals would have substituted their political beliefs for those of elected officials in agency shop states—participating in the broader attack on public employee rights spearheaded by politicians like Wisconsin governor Scott Walker and Illinois governor Bruce Rauner.

All of which is to say that rather than being a body above politics, the Supreme Court reflects the political trends of the day. Take last year’s gay marriage ruling. The words of the Constitution hadn’t changed, nor had some nebulous thing called “the law.” What changed, after decades of grassroots activism, was the political reality. The same forces that prompted the Supreme Court justices to change their view likely prompted establishment politicians such as Hillary Clinton to reverse their own position.

If judges simply interpreted “the law,” the death of a justice would not matter. But it does matter, and so a debate will rage over Scalia’s replacement.

Union activists should have a different discussion. Instead of engaging with the prevailing debate—which will likely consist of whether to appoint an ultra-right Republican or a corporate Democrat—those in and around the labor movement should use the confirmation battle to spark a conversation about the role of unelected judges in setting labor policy.

And we should note the role both parties have played in establishing and maintaining the present system of labor law. Even during oral arguments in Friedrichs, the liberals on the Supreme Court did not mount a rousing defense of public employee unionism. They simply warned the conservative majority about the dangers of overturning settled law—which they worried would threaten the appearance of impartiality the Supreme Court relies on to maintain its legitimacy.

Much of the body of settled law they were keen to defend—and which corporate liberals on the Supreme Court have been key to establishing—blocks effective trade unionism. Judicially created rules hamstringing labor include restrictions on class-wide solidarity and important tactics such as intermittent strikes, the permanent replacement of striking workers, and the use of the business form to evade unionism. Regardless of which candidate is eventually sworn in as Scalia’s replacement, this bipartisan consensus will almost certainly remain undisturbed.

Indeed, nowhere is the need for a Bernie Sanders–style political revolution more apparent than in the selection of Supreme Court justices. Sanders correctly rails against a bipartisan establishment encompassing politicians from both parties, corporate lobbyists and establishment media forces. But the federal judiciary, and in particular the Supreme Court, is perhaps the most quintessentially establishment grouping in American politics.

Which brings us to the bigger question at stake for unions. As long as labor allows nine establishment figures to dictate policy, we will never revive ourselves as a movement. The rules will continue to be stacked against us. Legislative or National Labor Relations Board initiatives, however well intentioned, will be nullified by the courts.

Over 100 years ago, a school of thought called Legal Realism shattered the idea that judicial decisions were anything but political decisions. Led by Oliver Wendell Holmes and firmly situated within the Progressive Movement, the Legal Realists rejected the idea that judges somehow divined decisions from abstract analyses of the law. To study law, they held, was simply to predict what judges would decide. This subversive idea—that there is no such thing as the law independent of actual decisions—proved highly destabilizing to a fundamentally undemocratic judiciary.

Around the same time, the labor movement was agitating against “judge-made law.” Understanding that labor policy was set by elites with no ties to the working class, unionists agitated not just for better judicial decisions but to remove labor policy entirely from federal courts’ jurisdiction.

For conservative unions like the AFL to radical ones like the IWW, defying judicial injunctions was a matter of official union policy. Unionists understood the law was not on their side. The anti-judicial sentiment reached its peak with the 1932 passage of the Norris-LaGuardia Act, which attempted to get federal courts out of the business of making labor policy. (Over the succeeding decades, the act was defanged by the same federal judges it was supposed to protect labor from.)

Today, the labor movement shouldn’t waste time pondering which elite Supreme Court justice will get confirmed, the latest NLRB initiative waiting to be overruled by the federal judiciary, or the newest scheme to revive labor within the confines of an unjust system of labor control. The more important discussion is the one posed by unionists a century ago: how do we break from the constraints of judge-made law?

While there is no easy answer to this question, shedding liberal illusions about the role of the Supreme Court is a start. It is also important to call out the many restrictions on union rights. We can educate, agitate and organize, but if the rules of the game are rigged, we will never succeed.

Winning requires first challenging the rules of the game and the prerogative of elite institutions to govern labor relations. Judicial support for public employee union rights, we shouldn’t forget, was only secured after millions of public-sector workers struck against a bipartisan consensus that rejected those rights.

There are no easy answers about how we knock down the barriers imposed by labor law. But let’s use the death of an arch-nemesis of labor to at least start the discussion.