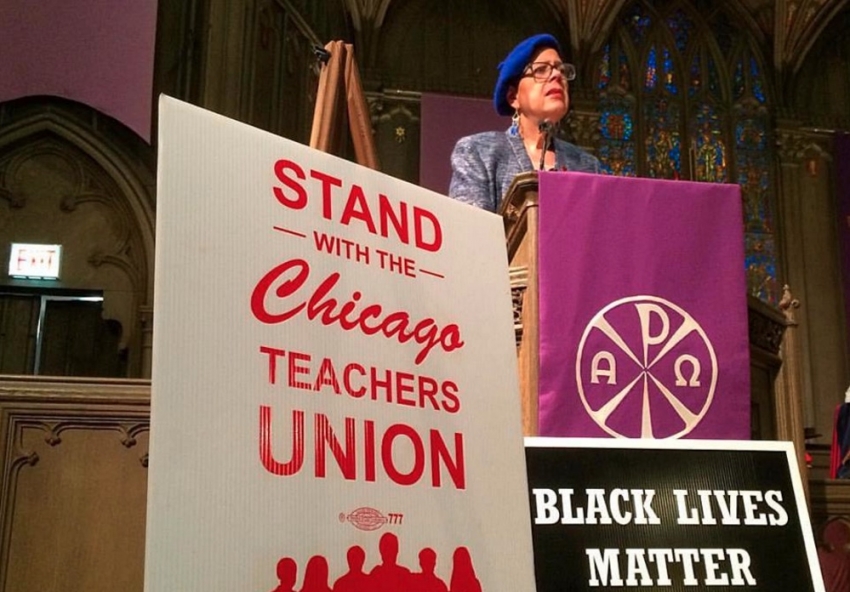 Activists from across Chicago gathered in downtown Chicago last night at the First United Methodist Church at the Chicago Temple to demonstrate a united front in the face of continuing budget cuts and austerity measures proposed by state and city officials and a potentially impending strike of the Chicago Teachers Union.

The phrase of the night was “Broke on Purpose,” as every speaker alluded to a budget crisis that they say has been manufactured by Republican Gov. Bruce Rauner and other wealthy Illinoisans at the expense of Chicago’s working class, teachers, minorities and immigrants. Growing frustration has led activists to call for progressive tax reform to fund public services and worker compensation.

Tod St. Hill, of BYP 100, argued that members of the Black Lives Matter movement must fight as ”fiercely” for education reform and the protection of mental health facilities as the demilitarization of Chicago’s police, AFSCME’s Tracey Abman called for ”one fight.”

AFSCME member Linda Loew and Elizabeth Lalasz from National Nurses United announced a city-wide day of “direct action” against Gov. Bruce Rauner, Mayor Rahm Emanuel and ”the rest of the 1%“ on Friday, April 1. The flyer declares that the day’s goal will be to ”SHUT IT DOWN,” asking “families, students, teachers, workers and all those who thirst for justice” to march against what they say are the city’s myriad racial and economic injustices. While there’s no mention of the phrase on the flyer, the day may have the makings of a daylong general strike.

April 1 had been suggested in February by the CTU as a start for an unfair labor practice strike, in response to a notice by CPS that they planned to cancel the 7 percent pension pickup that has been in effect since 1981. By law, Chicago teachers are required to contribute 9 percent of their salaries toward their pensions, but, under the pickup deal, 7 percent of that contribution is covered by the school system.

While the CTU and CPS battled over the legality of such a strike, CPS eventually backed off its proposal on March 4, claiming they will wait until the completion of an independent fact-finding mission, a legally required pre-strike process, on April 18 to make any final decisions on the cut.

The threat went from immediate to further in the future, but tensions haven’t been quelled. CTU President Karen Lewis promised April 1 would be still be a ”showdown” in a fight against continuing austerity measures, saying in a statement, “We will join with anyone who believes it is time for us to unite, to fight Rauner, Rahm and the Ken Griffins of our state who are united in a Trump-like campaign to turn back the hands of progress and destroy public education in Illinois—and most definitely Chicago.” (Griffin is a hedge fund manager and the richest man in Illinois.)

Speakers at the CTU event suggested that April 1 has the potential be massive in scale. “Together, we aim our slingshots at the giant,” said John Miller, President of UPI Local 4100.

As she exited the rally, Debby Pope, a retired schoolteacher and CTU staffer, said, “[We’re] fighting against our common enemy. We are going to take them down because our cause is righteous.”

The outcome of the citywide day-of-action may depend on just how many Chicago workers and citizens heed the call and hit the streets to boycott classrooms, the magnificent mile, and LaSalle Street banks.

Recalling the sense of isolation the CTU felt in the weeks leading up to its historic 2012 strike, Karen Lewis spoke of the need to come together this time to demand a budget and representatives that work for Chicago’s communities instead of against them, asking for "love, strength and cooperation in numbers" ahead of the day.