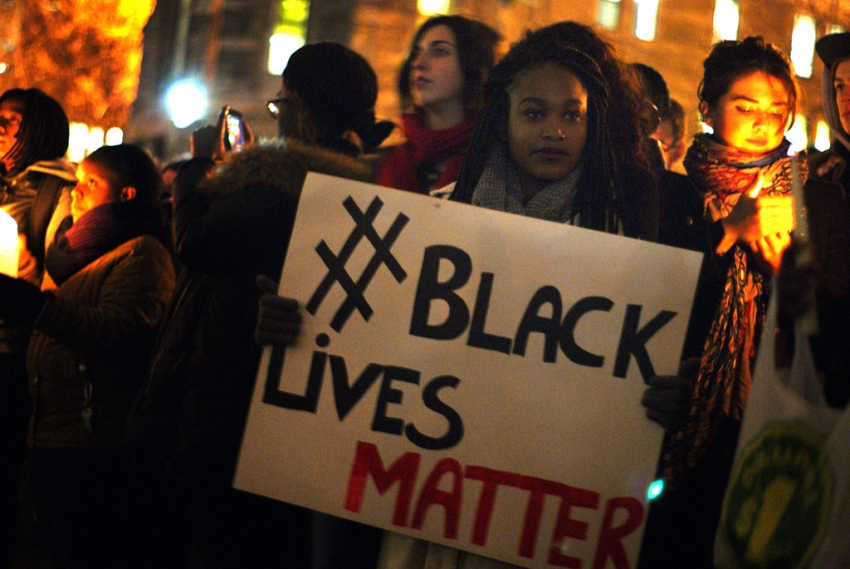 American unions appear on their deathbed. The percentage of workers in unions is at its lowest point in 75 years, corporate politicians have spread union-busting right-to-work laws to more than half the states in the union and labor’s traditional strongholds (from manufacturing to the public sector) are rapidly being eroded. But an opportunity for labor to reverse its fortunes looms large in the Black Lives Matter movement, the largest wave of anti-racist struggle in recent memory.

If American labor is going to reverse its declining fortunes, it must begin with attacking American racism.

Racism is the lynchpin that holds corporate America together—as well as the shoals upon which American labor has sunk for centuries. Racism in America—past and present, from the colonial to the Trump era—divides workers so to prevent an effective united front. The American labor movement must seize the opportunity presented by the current upsurge and put its institutional support behind the anti-racist movement. It is more than a moral matter. Organized Labor’s very existence depends on it—no American worker movement will succeed so long as racism remains rampant in America.

Activists in the labor movement must recognize that the question of which must take priority, anti-racist or labor struggle, is a false one. The two are inextricably intertwined and mutually dependent. The labor movement will never succeed without fighting and eradicating racism. Likewise, we cannot eliminate racism without eliminating the material inequality upon which it feeds. Racism is not a mere idea floating in the cultural clouds; it is an ideology rooted in and dependent on material inequality along racial lines. In the question of ending racism and economic inequality in America it is not one or the other, but both or none.

The history of racism’s development in the United States, starting from the very beginning, helps illustrate its importance to workers and unions. Colonial elites implemented racist laws largely in response to unified worker resistance. In 1676, a united front of white indentured servants and African slaves rebelled against Virginia’s ruling class. For wealthy colonists, Bacon’s Rebellion was one of several white-and-black colonial uprisings whose solidarity sent shivers down elites’ spines.

Only after these rebellions did the colonial ruling elite implement the racist and caste-hardening Slave Codes, codifying American racism by prohibiting whites to be employed by Blacks, criminalizing the touching of whites by Blacks, establishing separate judicial courts and more. In the face of labor solidarity, early wealthy Americans laid the foundation for centuries of institutionalized racism to divide and conquer discontented American laborers. Multi-colored labor solidarity was to be destroyed at all costs.

As the colonial planters clearly recognized, racism shifts the discontent of white workers from their exploiters to their Black coworkers. In hyper-oppressing one section of workers, wealthy elites squeeze even greater profits from Black and brown workers while undercutting the potential unity and power of all workers.

History is full of examples of racism’s paralyzing effect on collective worker action in American labor. Railway owners undermined the famous Pullman Strike of 1894 by hiring scores of African-American workers. Despite Eugene Debs’ (then head of the American Railway Union) pleas, the ARU previously barred African-American members at its founding in 1893. The union paid the price for their racism: the strike collapsed under the weight of the excluded scabs. Seattle’s General Strike of 1919 similarly failed when employers brought in non-white strikebreakers by the thousands; a large majority were African-American and Chinese, both generally excluded by Seattle’s unions.

W.E.B. DuBois explained the failure of the Radical Reconstruction of the post-Civil War era—and its potentially historic alliance of Black and white Southern workers to democratize the South—in precisely the same vein:

The race element was emphasized in order that property-holders could get the support of the majority of white laborers and make it more possible to exploit Negro labor. But the race philosophy came as a new and terrible thing to make labor unity or labor class-consciousness impossible. So long as the Southern white laborers could be induced to prefer poverty to equality with the Negro, just so long was a labor movement in the South made impossible.

The American’s labor movement’s most important campaign of the 20th century, Operation Dixie in 1946, also failed spectacularly due to racism. Despite huge financial investment from the CIO to organize the American South, labor’s Achilles heel, the effort collapsed as Southern employers successfully discouraged white workers by stoking their racism in equating unionism with racial equality. Moreover, racist leadership (under pressure from racist membership) within the CIO shied away from targeting the South’s most organizable workers, African-Americans. The effort thus failed to make inroads into the South, and unions suffer the debilitating consequences of an unorganized South to this day.

The list of potential examples is long. Time and time again, worker organization in America sunk on the shoals of racism.

Racism continues to divide workers and cripple the American labor movement. Conservative politicians have launched massive legal attacks against unions across the country, but how do these conservative politicians who attack unions get elected in the first place? In part, white working-class voters fueled by anti-immigrant, anti-Black, and Islamophobic scapegoating elect them. In other words, racism.

It is obvious that immigration laws that leave millions of workers in the U.S. without the right to organize undermines the leverage of all American workers, but how have right-wing politicians justified and passed these immigration laws? By scapegoating immigrants, Latinos in particular, for the country’s ills. In other words, racism.

Clearly, massive unemployment and poverty-level minimum-wage laws keep workers’ leverage minimal, but how do the rich legitimize such abysmal economic conditions? Through vitriolic, victim-blaming rants about lazy (Black) welfare recipients and a "culture of poverty" in Black communities. In other words, racism.

White workers are statistically much less inclined to join a union than Black or Latino workers, but why? White workers, seduced by that old siren song of racial prejudice and often identifying more with their white bosses than with their Black and brown coworkers, are more inclined to blame their suffering on immigrant ”job-takers” and a Black underclass than their employer. In other words, racism.

Racism thus leads to the laws, economic conditions, and attitudes that make organizing unions so difficult in contemporary America. Rampant racism in America has paved the path for American capitalists to gut the percentage of American workers in unions to eleven percent and shriveling.

But overcoming that racism is not impossible. This is where the opportunity presented by a rising anti-racist movement comes in. The Black Lives Matter movement is waging war on American racism. Unions can help. Primarily, unions can mobilize their still-sizable membership of 16 million workers for anti-racist struggles. Where there is anti-police brutality, anti-mass incarceration, anti-ICE or any anti-racist protest, unions should turn out their members and lend their heft to the cause. Serious turnout from labor unions would be a serious jolt for the Black Lives Matter movement—and could help transform unions’ members, too.

Second, unions have an unparalleled ability to reach white workers for anti-racist political education. Beyond the sheer number of white workers in unions’ ranks, there is no better context than labor struggle to convince workers from different backgrounds of their common bonds.

Unions should directly engage their white members through education on the anti-worker function of racism. Union leaders will meet internal resistance to committing time and resources to anti-racist struggle, but internal battles on this issue are necessary and will lead to the tough conversations members need to have.

But the crux is that unions must mobilize all of their resources and energy in the anti-racist struggle. It can’t just be a symbolic bit. Unions cannot understand anti-racism as merely solidarity work; anti-racism must be understood as a union issue itself.

Better yet, anti-racism must be understood as the union issue of our immediate time. Contracts must be negotiated, new organizing drives must be pushed and internal organization must strengthen, but unions will make no paradigm-changing advances until they help vanquish racism in America. Accordingly, local and International unions should dedicate vast staff and financial resources to anti-racist mobilization and education. Anything less, any other organizing activity, is akin to doing petty house repairs during a raging house fire. The house of Labor will soon be mere ashes if we do not help confront racism in America.

What could this look like in practice? Unions should mobilize large numbers of rank-and-file members (not a symbolic few in union t-shirts) for anti-racist demonstrations to have a serious impact. Unions should only support politicians who will fight for anti-racist public policy like measures against police brutality—politicians’ positions on issues affecting minority communities should be considered of equal importance to unions as their positions on collective bargaining. Unions should create training programs that promote advancement of African Americans and Latinos into union jobs, particularly higher-level positions long-denied due to discrimination (and aggressively police any discriminatory hiring practices by employers).

Unions should practice affirmative action in filling staff and leadership positions, and invest in training programs that prepare minority rank-and-file members for them. Union contracts should serve as models of racial justice legislation, such as prohibiting asking job applicants about their criminal record and providing job protection for workers in need of leave to resolve immigration issues. Unions should ally with community organizations to make sure any development or Project Labor Agreement benefits communities of color, not harm minority workers at large for the immediate benefit of the union’s membership. Unions should invest in national membership education programs on racial justice—the labor movement cannot fight racism if its rank-and-file is not prepared to do so.

It’s a long list to start with, to be sure. But it’s essential work that unions can’t turn away from. Racism is the lynchpin that holds American capitalism together despite all its inequality and misery. If labor can help remove the pin, we can watch it crumble.

Andrew Tillett-Saks is the organizing director of UNITE HERE Local 217. You can contact him at andrewtillettsaks [at] gmail [dot] com.