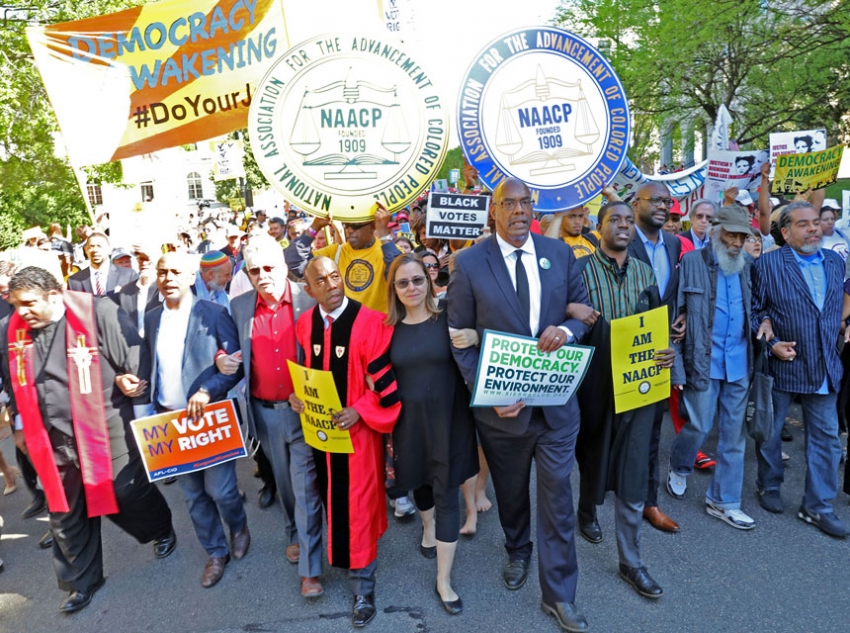 Among the 307 Democracy Awakening 2016 activists arrested at the U.S. Capitol were, left to right, Rev. William Barber of North Carolina's Moral Monday movement, Tefere Gebre of the AFL-CIO, Chris Shelton of the Communications Workers of America, Cornell William Brooks of the NAACP, Annie Leonard of Greenpeace, and Aaron Mair, President of the Sierra Club. At right (with beard) is social justice activist Dick Gregory.   Keith Mellnick/ AFL-CIO

WASHINGTON, D.C.—About 300 activists in organizations devoted to progressive reforms in the federal government were arrested Monday in a civil disobedience action on the steps of the U.S. Capitol.

Embracing legislative issues common to labor unions, civil rights groups, environmentalists, and immigrant rights advocates, the coalition known as Democracy Initiative engineered the arrests as a way to punctuate its springtime “Democracy Awakening 2016” campaign. According to spokesperson Sean Trambley, key demands of the campaign are reversal of the Citizens United Supreme Court case favoring corporate financing of elections, restoration of the Voting Rights Act of 1965, full consideration by the U.S. Senate of President Barack Obama’s stalled appointment to the Supreme Court and related legislative proposals.

“We’re following in the footsteps of the martyrs of the voting rights movement,” of the 1960s, Cohen told a crowd of about 3,000 that marched from Washington’s Union Station to Capitol Hill. The expansion of voting rights, and fight against corporate control of elected officials, is crucial to the broader goals of labor and other progressive groups, he said.

Gustavo Torres, Executive Director of the immigrant rights group CASA, agreed, declaring “working people are ready to fight back by the flexing their political muscle in November” during the presidential election. Torres was among a total of 307 arrested Monday, according to spokesperson Trambley.

Immigration was a dominant theme at the demonstrations, with one mass of marchers stopping in front of the Supreme Court building to rally in favor of the Obama administration’s efforts to limit deportations. A legal challenge to Obama’s efforts—United States v Texas—was on the docket for oral argument at the high court Monday.

Marchers from CASA and the United Food & Commercial Workers (UFCW) union were strongly represented in front of the court building. UFCW Local 400, based in nearby Landover, Md., has been particularly active in immigrant rights agitation over the last decade, and arrived at the demonstrations Monday in force.

The demonstrations, including the arrests, were well-organized and fully coordinated with the Capitol Hill Police department. When the demonstrators came to the end of their march, they were met by some 75 police officers ready to process those wished who to be arrested. Buses to transport those arrested were already lined up. There was no tension whatever between the crowd and the police, and a festive atmosphere was evident among many of the marchers.

Cohen, speaking to In These Times by phone after his release, judged the day a success. The arrests were merely a capstone to several months of intense organizing and agitation among some 200 different organizations supporting the Democracy Awakening 2016 campaign, he says, but are nevertheless a sign of growing unity and strength among progressive groups.

“The democracy movement is the broadest-based and most united it’s ever been. We are all really united in this campaign to get dirty money out of politics, and to realize the promise of the historic civil rights movement with its commitment to empowering voters…. What we have seen today is symbolic of a movement that is really capable of making change.”

The Communications Workers of America are sponsors of In These Times and represent its staff. Sponsors play no role in editorial content.