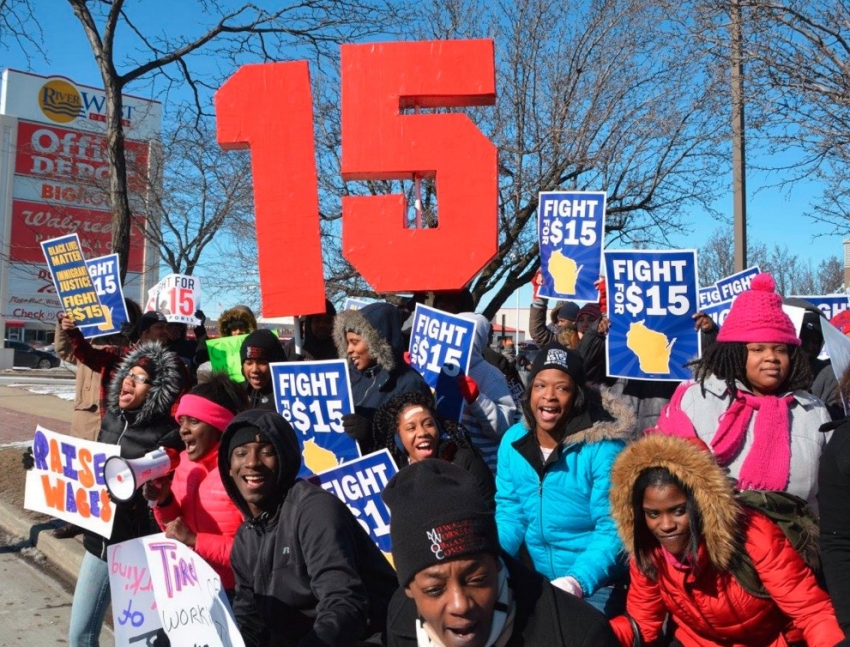 Protesters at a February rally for $15 and union rights in Wisconsin. (Fight for $15 Wisconsin / Facebook)

BALTIMORE—Although it was nowhere on the ballot, the Fight for 15 was a winner in the municipal elections here Tuesday.

In a Democratic Party primary election that selected candidates for both a new mayor and a new majority of the city council, supporters of a city-wide minimum wage law of $15 an hour appear to have won enough offices to see it enacted. The push is underway now to get it passed this year, and almost certainly will be passed by early next year, at the latest, activists say.

Because of a large Democratic majority in the city, the spring party primary is considered tantamount to final victory in the November general election. Only an unprecedented political upheaval could prevent the candidates selected this week from taking office in January 2017.

Fight for 15 supporters are mobilizing behind a bill introduced earlier this month by City Councilwoman Mary Pat Clarke (D). Clarke’s bill would raise the minimum wage to $15 an hour by 2020, and also eliminate the subminimum “tipped wage.”

Worker activists are pleased that the new Democratic candidate for mayor, Catherine Pugh, is committed to signing a $15 bill, says Charly Carter, executive director of the political party Maryland Working Families. The new city council will include a strong majority who have already committed to supporting the higher minimum wage, so the path to final passage seems clear, she says.

Majority support in the 15-member city council was evident even before the election this week, Carter explains. “We had somewhere between nine and 12 votes before the primary. But our goal had to be at least 12,” to override an anticipated veto by current Mayor Stephanie Rawlings-Blake, she says. Although Rawlings-Blake had never explicitly threatened a veto, some City Hall insiders are interpreting her lukewarm public comments about the higher minimum wage as a veiled veto threat.

With this political arithmetic, Working Families made support for $15 one of its minimum requirements for an endorsement in city council races, as did a number of labor unions active in local politics. Special importance was attached to the council races because an unusually large number of members had announced their retirements, meaning that a working majority on the council would be reformulated in the election process. Therefore it was a priority for Working Families to add support for the Fight for 15, Carter says.

Riccara Jones, a political organizer for the Service Employees International Union (SEIU), did candidate interviews on behalf of her union and reports that most candidates were quick to commit to $15. “Support for Fight for 15 is out there in the community, and the politicians who are listening to the community are lining up,” Jones says. Maryland units of SEIU locals 1199 and 32BJ endorsed seven candidates for council, and six of those were successful on election day.

“I’m optimistic we have the votes” to pass the minimum wage law, Jones adds. The union will push to pass it this year, despite reservations about Mayor Rawlings-Blake. “She’ll be gone at the end of the year, so I don’t see any reason why she would want to fight over this. Even if she wins a veto fight, then it gets passed under Mayor Pugh. … Our goal is to do it now. Baltimore can’t wait another year,” she says.

Jones’ comment partially reflects a feeling among some political activists that an opportunity for change in the wake of the Baltimore race riot one year ago is slipping away. Working Families’ Carter, for example, says that there have been a lot of press conferences and statements from public officials, but there is no sense in the streets that anything has changed. The voluntary retirement of Rawlings-Blake and the turnover at the city council seems to be an admission of defeat by Baltimore's current political leadership, but that has yet to replaced by a renewed sense of purpose.

“A year after the uprising, nothing has been done. The terrible conditions in these neighborhoods have not changed at all,” she says.

Operating independently of Working Families, UNITE HERE Local 7 has been active in this election but on a different scale, says President Roxie Herbekian. “We are more oriented to the community level. We saw that two council districts had a high percentage of our members, and that the incumbent councilmen in those two districts are what I would call ‘do nothing’ politicians. So we supported challenger candidates and worked hard to get them elected. Of course, we wouldn’t support anyone who would oppose the $15.”

UNITE HERE was rewarded with success on Election Day, and both challengers supported by the union won. “But really, we are not about making friends with one candidate or another. We are mobilizing on a community level around our broad goals,” of improved lives for workers, she says.

A higher minimum wage fits in with those broader goals and will have a real impact in the lower-income neighborhoods of Baltimore, Herbekian predicts. UNITE HERE, along with other unions and local activists, will be pushing the city’s elected officials to move as quickly as possible, she says.