The Verizon Strike Is Now In Its Second Month, and the Stakes Are Higher Than Ever 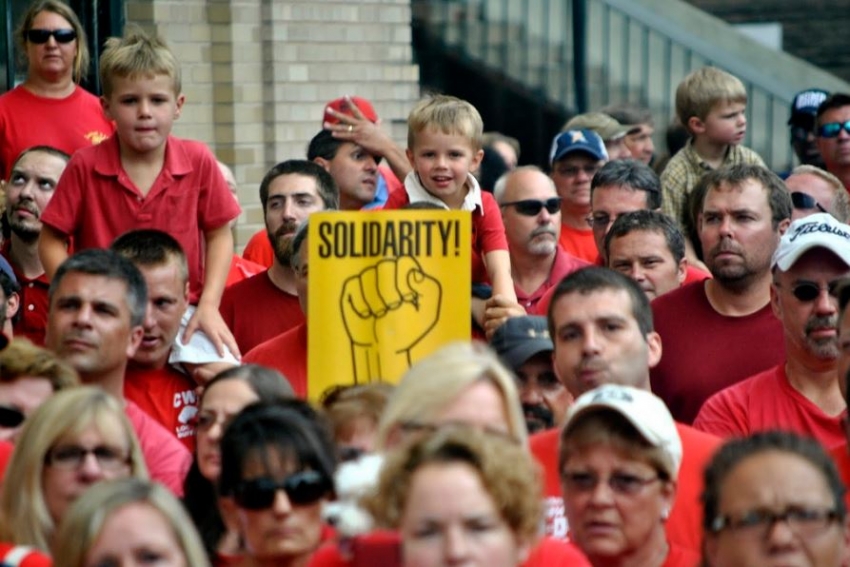 This piece first appeared at Jacobin.

As the massive strike at Verizon enters its second month with no end in sight, the stakes — for the workers, the company, and the broader labor movement — are rising. Even mainstream media outlets like the New York Times have taken note, casting it as something of an epochal battle over whether the economy can tolerate good jobs that actually deliver economic security and decent benefits.

The strike began on April 13, when 40,000 Verizon landline workers, represented by the Communications Workers of America (CWA) and the International Brotherhood of Electrical Workers (IBEW), walked out after nine months of contentious and fruitless contract negotiations. The unions are fighting employer demands to make outsourcing and offshoring jobs easier, as well as cutbacks in health benefits.

Verizon isn’t budging. It opened the month of May by canceling striking employees’ health insurance—an action that was technically legal, but union officials say represents a departure from the past. In the meantime, unions have been helping members patch togetheremergency health coverage.

These days, a strike of the Verizon action’s scale and duration is exceedingly rare. That’s largely because the stakes for workers are so high. Strikers don’t just lose their pay and benefits—they risk losing their job entirely.

When Congress passed the National Labor Relations Act in 1935, their explicit purpose was to encourage collective bargaining, restrict interference with unions’ right to strike, and prohibit discrimination against workers for union activity. (They were also hoping that by providing an orderly process for union recognition, workers would stop physically occupying corporate property and disrupting commerce.)

But almost immediately after the NLRA’s passage, the courts got to work gutting union rights. In 1939, the Supreme Court decided that “of course” Congress didn’t mean to curtail capitalists’ right to keep their businesses open, and so “of course” employers could hire new workers to permanently replace striking workers. Being replaced, they reasoned, wasn’t the same as being fired or discriminated against.

In the 1980s and ’90s, employers began using this legal precedent in earnest. They’d bargain unions to an impasse, dare them to go out on strike, and then replace workers with scabs. The tactic worked, successfully decertifying much of the unionized industries in the US.

Unions still have limited legal recourse. In the current dispute, the CWA has filed an unfair labor practice charge with the National Labor Relations Board over Verizon’s bargaining conduct—a move that could provide strikers with a measure, but far from a guarantee, of protection against permanent replacement.

Verizon’s machinations underscore workers’ vulnerability. The company is placing full-page ads in newspapers seeking out “temporary full-time technicians” (it claims to have recruited “thousands” of scabs, a figure so vague that even Fortune magazineput it in scare quotes) and attempting to lure workers across the picket line. So far, Verizon boasts, one thousand union members have scabbed. But even if that number is accurate, it would amount to less than 3 percent of the workforce.

One of the reasons the Verizon workers are striking when few other unions are willing to take the leap is that their skills and experience are not easily replaceable. As social media sites like the Stand Up To Verizon Facebook page show with aplomb, scabs are bumbling through their repair work, with often dangerous consequences.

Verizon is willing to cope with the temporary ineptitude because it is intent on facing down the unions. With cell phones supplanting landlines and fiber-optic cables becoming a more lucrative market than Ma Bell’s legacy copper wires, the company wants to quarantine the unions from its growth divisions.

To that end, Verizon has vigorously resisted union organizing attempts at its wireless division—and with much success. While the staff at a handful of wireless stores have organized, none have won a contract.

For their part, the striking unions have extended their picket lines to as many Verizon Wireless storefronts as possible. Any dent they can put in the wireless division’s market share, the unions recognize, is collateral damage for Verizon.

They’ve also fanned out to the legal and political front. Earlier this month, the unions filed federal communications charges against Verizon for its strong-arm tactics in pushing traditional telephone customers to switch to the company’s more modern (and more expensive) fiber optic system.

And they’ve applied carrot-and-stick pressure around the company’s high-speed Fios service, which is in high demand among residential customers—and therefore popular with local politicians — but remains a lower investment priority for Verizon than its non-union wireless division.

In other activity off the picket line, union activists and supporters disrupted Verizon’s May 5 shareholders meeting in Albuquerque, New Mexico. Two hundred and fifty activists protested the confab, including fifteen who engaged in civil disobedience. Union pension voters, representing $1.3 billion in Verizon stock, also forced an ultimately unsuccessful vote on a resolution to curtail executive compensation.

To some extent, workers have benefited from striking in a presidential election year. Bernie Sanders, whose insurgent campaign received its most prominent union endorsement from the CWA, was on the picket line the first day of the strike and has been doing solidarity work ever since. Even Hillary Clinton—no doubt pressured by a surprisingly competitive primary — found a comfortable pair of shoes and joined a picket line.

The optimistic view is that this indicates the resurgence of a long-moribund labor movement.

Last year, the federal Bureau of Labor Statistics, which keeps track of “major work stoppages” (those involving more than one thousand workers), reported a 400 percent uptick in lost working hours over the previous year. The increase represented the high-water mark for strike activity over the past half-decade—and the Verizon strike alone blows that record out of the water.

Yet the strike is also a major test of whether relatively well-positioned workers can withhold their labor and win.

A common chant on picket lines is “One day longer, one day stronger.” That is particularly true of a strike like this one, which is by design and circumstances a war of attrition. The company budgeted for first quarter strike-related profit losses, but admits that a protracted strike could impact the entire year’s bottom line.

The striking workers, of course, face far worse privation. They don’t have shareholders to underwrite their losses. They just have a strike fund (and a solidarity fund). But most workers, unionized and non-unionized, are in even direr straits.

The outcome of the Verizon workers’ strike will therefore be taken as a labor bellwether—for good or ill.

The CWA is a sponsor of In These Times. Sponsors play no role in editorial content.

In These Times is proud to feature content from Jacobin, a print quarterly that offers radical perspectives on politics and economics. Support Jacobin and buy a four-issue subscription for just $19.95.