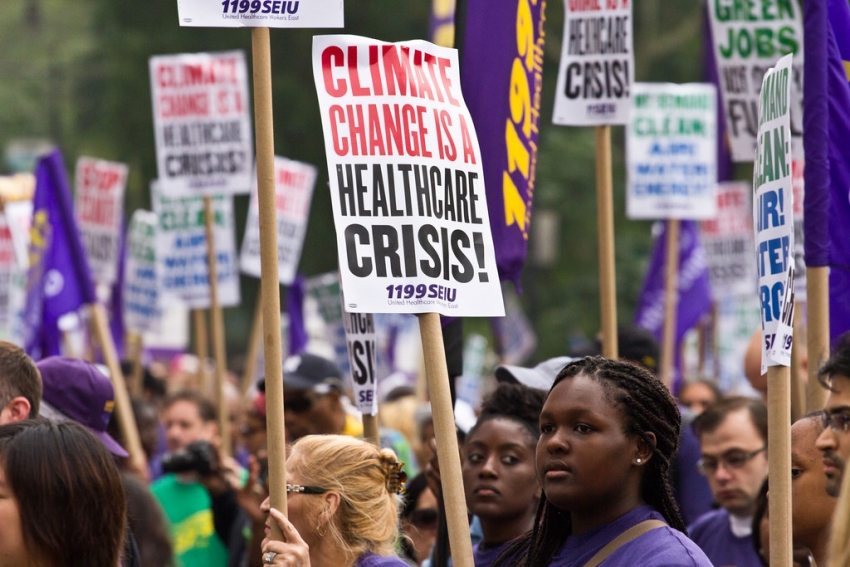 Union workers attacking environmentalists—it has become a trope of our time. But what do union members actually think about the environment?

In a study soon to be published in Labor Studies Journal, we report our findings on workers attitudes and behaviors regarding a variety of environmental issues. In particular, we examine the attitudes and behaviors of unionized workers to see how they may differ from the non-union respondents. The results might surprise those whose images of worker attitudes come only from the mainstream media.

Looking at data from national surveys, we find that union members are on average more likely than the general population to display pro-environmental attitudes and behaviors.

People were asked if they had signed a petition about an environmental issue in the past five years. Twenty-five percent of the general population said yes—but 32 percent of union members said yes.

This finding runs against the mainstream media mantra of “jobs versus the environment,” a frame which portrays unionized workers as self-interested and materialistic, putting their own personal gains above all else, including the environment. A more informed historical analysis would reveal a long record of environmental concern among unionized workers and their organizations that overlaps and intermingles with the sporadic “news event” conflicts that occasionally flare up between workers and environmentalists.

The United Steelworkers, for example, supported the very first Federal Clean Air Act; unions and environmentalists joined together in many states to win the right to know about toxic substances used in industry; the AFL-CIO helped establish the National Wilderness Preservation System; the United Auto Workers was the leading funder of the first Earth Day and more recently supported raising emissions standards for autos. Such pro-environmental policies reflect a little-recognized desire and even activism for environmental protection among union members.

That isn’t to deny that unions face an inescapable tension. On the one hand, they are principally organized to protect the work-related interests of their members. On the other hand, they have a responsibility to represent the broad class and social interests their members share with other workers, citizens, and human beings and to protect the future of the labor movement. From time to time, these interests come into conflict—particularly within unions whose members work in extractive industries like oil drilling or fracking. When a particular group of workers find their very livelihoods threatened by environmental protection or other socially necessary policies, their unions have a responsibility to ensure that the burden of change is not unjustly put on them.

Faced with such a situation, unions can simply fight against socially desirable policies that may harm some of their members. But unions have the opportunity to pursue another course: not trying to preserve environmentally destructive jobs, but fighting for economic security and/or new jobs with equal or better wages and benefits. This has come to be known as providing a “just transition.” Fighting for such a transition can be a crucial point of convergence between environmental and labor advocates.

What is actually more remarkable than the fact that some unions sometimes oppose specific environmental policies that may harm their members is the fact that particular unions and organized labor as a whole have so often served as advocates for environmental protection. Far from pursuing interests of members that contradict broader social interests, unions in such cases advocate for the interests their members share with others. As Olga Madar, the first head of the UAW Conservation and Resource Development Department put it around the time the UAW was helping initiate the first Earth Day, union members were “first and foremost American citizens and consumers” who “breathe the same air and drink and bathe in the same water” as their neighbors in other occupations.

Our study shows that the remarkable tendency of unions to support environmental policies and even to take the lead in environmental efforts is not an aberration, but rather is often a reflection of the concerns and convictions of their rank-and-file members. Union members, far from being only concerned with their immediate self-interest at the expense of a broader common interest in environmental protection, are often more concerned about the environment and more willing to act on that concern than either the public at large or non-union workers.

Jeremy Brecher is the author of more than a dozen books on labor and social movements, including Strike! and Global Village or Global Pillage and the winner of five regional Emmy awards for his documentary movie work. He currently works with the Labor Network for Sustainability. Todd Vachon is a Ph.D. candidate in sociology at the University of Connecticut and the president of UAW Local 6950, UConn's graduate employee union.