What Will It Take To Wake Up the ‘Sleeping Giant’ of the New Working Class? 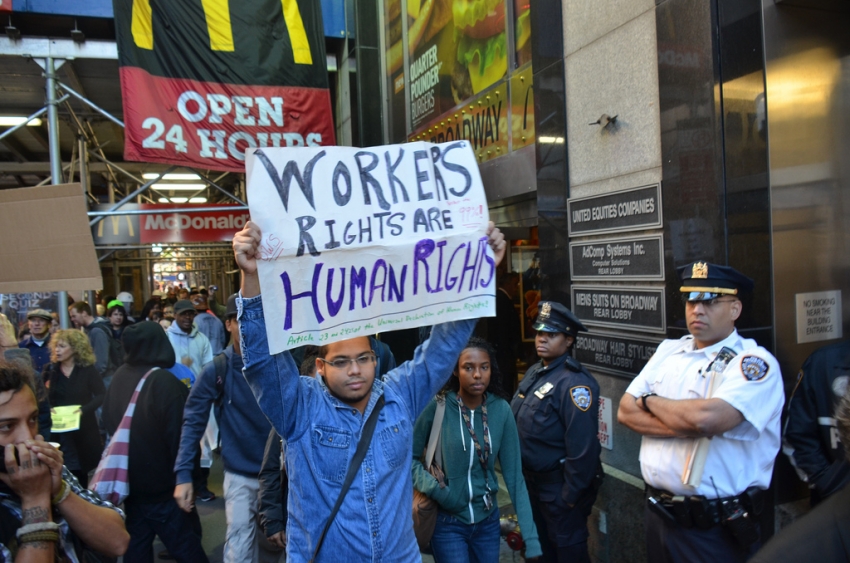 Low-wage workers protest at a McDonald's in the Bay Area in 2013. (Steve Rhodes / Flickr)

The American working class has been dissed and dismissed. Our unions busted, our wages slashed, our homes foreclosed and our rents raised. We’re blamed for the rise of Trump, but otherwise do not exist in the media landscape.

But the working class is a sleeping giant that is beginning to stir and will soon instigate a great campaign for racial and economic justice, according to a new book by Tamara Draut. A vice president of the liberal think tank Demos, Draut’s previous book, Strapped: Why America’s 20- and 30- Somethings Can’t Get Ahead, explored the how the high cost of college, housing and health insurance, combined with stagnant wages and made the usual milestones of adulthood increasingly out of reach for millennials.

Her new book, Sleeping Giant: How the New Working Class Will Transform America, attempts to connect the dots between the struggles of those millennials and the politics of austerity, globalization and the massive transfer of wealth to the 1 percent that has reduced the living standards of almost all working families over the course of the last 40 years. It finds a strong sense of optimism in the recent increase in protest activity.

Draut spends a good deal of her narrative making the case that there is still a working class in “post-industrial,” “digital age” U.S.A. The heterogeneity of this new working class—no longer solidly white and male, if it ever was—along with media indifference and a cultural legacy of devaluing “women’s work” and disenfranchising immigrants and people of color renders it “invisible” to many.

Quantifying who is even in the working class, statistically speaking, is a notoriously hard thing to do. She consults with the dean of working-class studies, SUNY Stony Brook professor Michael Zweig, who uses federal occupational data to estimate that 60 percent of us comprise the working class. But most political surveys do not inquire into one’s relationship with the means of production, and so Draut uses educational attainment as a not-unreasonable proxy.

Not that Draut’s tome would fit within the mountain of punditry that emphasizes educational attainment as a cure for poverty. She eviscerates this “elite blind spot” that focuses on the “miniscule” sliver of new professional jobs while ignoring the “scads of new jobs being created in home health care, fast food, and retail.”

Draut is one of the few mainstream writers I’ve seen who has noted the fact that workers are increasingly rejecting the label “middle class” for themselves, while political and media elites still use the term as a shorthand for the ideal American lifestyle. Not noted—perhaps not known—is that when unions do internal polling on political campaigns, questions phrased around improving the lives of middle-class Americans perform significantly worse than identical questions that talk instead about “working families.” Workers hear politicians’ “middle class” campaign rhetoric as promises to give more breaks to people who are already better off than them. (Which probably isn’t that far from the truth.)

The largest class of people in the country demanding their visibility and raising expectations that they deserve more is the very definition of a sleeping giant stirring. Draut sees the “Day without Immigrants” May Day protests, Black Lives Matter and the Fight for 15 as the beginning of a new workers movement. The key, she says, will be working through the historical legacy of racism and sexism to make common cause between these three interconnected movements.

There is perhaps a little too much optimism in Sleeping Giant. After all, the last big May Day strike was over a decade ago at this point. The ground is undeniably shifting, opening up a space for more progressive demands, but it’s not moving all that fast.

Still, since Draut handed in her final draft of this book, millions of voters rallied have to a socialist presidential candidate who will rewrite the Democratic Party’s platform, and the workers at Kohler and Verizon proved that the remaining large industrial unions can still go on strike and win. So the time is right for books that speak confidently that a new workers movement is rising up.

But it’s not entirely clear who the audience is for Sleeping Giant. While she clearly advocates for more unions, Draut’s treatment of unions is a little too abstract.

The “real power” of unions, she writes, is that they “can amass significant resources to engage in voter turnout, agenda setting and issue advocacy.” That’s a think-tank view of unions. Anyone who’s ever been a part of a workplace job action that resulted in, say, a reduced workload or new safety equipment or got a disrespectful supervisor straightened could take offense at the notion that our “real” power is in our union treasury and checkbook.

Sleeping Giant seems best addressed to the Acela-riding political class: reporters and political staffers who need to learn that the working class still exists and that their “untapped political power” should be heeded. There’s a value to that. One thing that preceded labor’s great upsurge in the 1930’s, ever so slightly, was a rising tide of opinion among intellectuals and political actors that an increase in union power was necessary to stabilize the economy and shore up the Democratic Party’s base.

They can have their reasons for wanting unions, and we’ll always have ours.

The book falters a bit as well when it comes to the “Blueprint for a Better Deal” it advocates. Draut correctly notes that while the demand for a $15 minimum wage was immediately derided as unrealistic, the high bar that the demand set, combined with workplace action, quickly opened up a space that made a range of wage raises politically possible. Curiously, though, her programmatic proposals are safe, moderate, vetted. It includes paid sick and family leave, universal pre-K, tuition-free public college, card check for union organizing and overturning Citizens United.

I’ll take it all, but this is the stuff of a white paper, not a political manifesto. These are transitional demands that have a snowball’s chance in hell in the short term, and that, once the sleeping giant is fully woke and pressing a campaign that looks more like a mass strike wave, would hopefully be traded-in for much more ambitious demands.

Still, Sleeping Giant is a worthy entry in the contemporary progressive canon that should inspire more debate about the world we have to win.