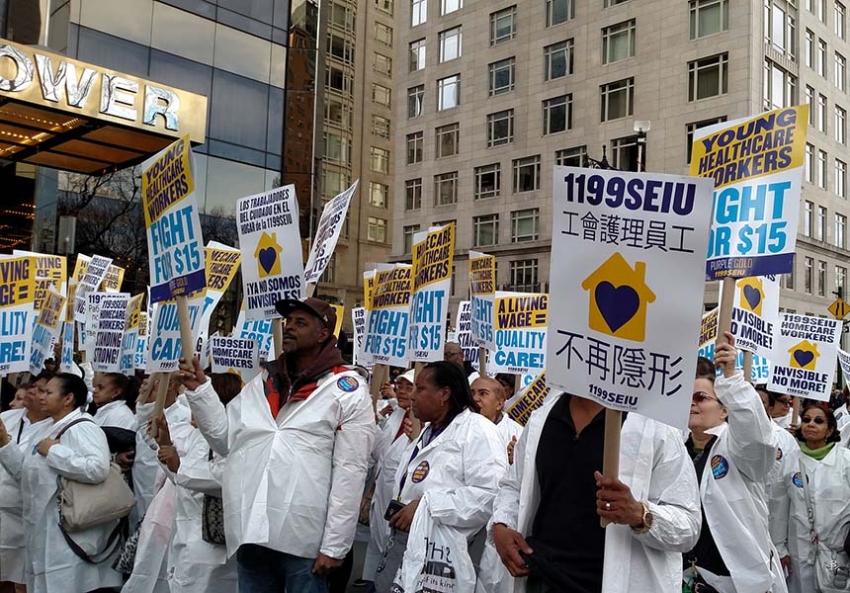 The national movement toward a minimum wage of $15 an hour is picking up steam in Baltimore, with a key test of strength for the local movement expected before the end of the summer.

The City Council’s Labor Committee met last week to begin the process of moving legislation to a vote, hearing testimony from supporters and opponents, and setting the stage for a full Council vote in late July or August.

“We’re making progress. I’m encouraged,” says Councilwoman Mary Pat Clarke (D), the chief sponsor of the legislation. Powerful opposition from Baltimore business interests is apparent, she tells In These Times, but that is to be expected. On the other hand, support is strong from a majority of the members, Clarke adds, so proponents are pushing forward for a full Council vote just as soon as practical.

“We hope to get this passed in August or September,” says Ricarra Jones, a political organizer for 1199SEIU. Opponents are “trotting out the same old discredited (economic) theories,” she says, but the momentum of successful $15 minimum wage fights in California, New York, Seattle, and Washington, D.C., should help push the Baltimore effort forward.

Jones says local labor unions are rallying in favor of the higher minimum wage. Aside from SEIU, prominent in the coalition are the Baltimore Teachers Union (an affiliate of American Federation of Teachers), the American Federation of State, County and Municipal Employees (AFSCME), and UNITE HERE. Ernie Grecco, President of the Metropolitan Baltimore Council AFL-CIO Unions, adds that support is “unanimous’ among the 160 local labor organizations affiliated with the group.

As reported earlier at In These Times, Clarke’s bill would raise the minimum wage in steps from the current $8.25 an hour to $15 by 2020. It would then establish a cost of living adjustment (COLA) so that the wage would rise annually thereafter, based on inflation statistics. Significantly, it would also eliminate the so-called “tipped wage,” the special sub-minimum of $3.63 an hour that applies to waiters, waitresses, bartenders, and other servers who receive tips as part of their daily work.

Melvin R. Thompson, a lobbyist for the Restaurant Association of Maryland, focused on the tipped wage during his testimony to the Labor Committee June 15. “Passage of this legislation will force many employers to eliminate jobs because paying such high minimum wages to unskilled, entry-level workers will be unsustainable for businesses that utilize such labor. If passed, this legislation will ultimately hurt the very people it is intended to help,” he told the committee.

The Restaurant Association commissioned a study that found the $15 minimum would cause the loss of about 3,500 jobs in the city, Thompson added. One restaurant manager, identified as an official of the Ruth's Chris Steak House chain, asserted that the chain would close at least one, or possibly two, of its locations in the city if $15 legislation passed.

These voices against raising the wage were joined by executives from the Greater Baltimore Committee and the Downtown Partnership of Baltimore, two influential Chamber of Commerce-like organizations representing business owners.

In sharp contrast to the well-tailored suits and slick presentations of the lobbyists was the testimony of Vonzella Barnes, a housekeeper at the Horseshoe Casino, a recently-opened gambling palace controlled by the multinational Caesars Entertainment Corp.

Hired at the opening of the casino two years ago at a wage of $9.50 an hour, she has had no raises, the 46-year-old mother of two testified to the Labor Committee. The cost of the two children, and other regular monthly expenses, means that “I constantly have to borrow money from my Mom to pay the rent,” she said. “At her age, I should be giving her money, not borrowing from her.”

Barnes wore her red UNITE HERE union t-shirt as she testified, signifying that many union workers in Baltimore would benefit from the $15 minimum wage. UNITE HERE and several other unions represent workers the casino, but even union wages in some of the lower-pay positions leave workers at near poverty levels.

Indeed, 1199SEIU members launched a series of short strikes against Baltimore’s Johns Hopkins Hospital in 2014 over a demand for a $15 minimum, but failed to achieve that is the final settlement. During that fight, it was exposed that hundreds of employees of the wealthy Hopkins Hospital were forced to rely on Medicaid, food stamps, housing subsidies, or other anti-poverty programs, to make ends meet.

Councilwoman Clarke linked her minimum wage proposal to Baltimore’s race riot last year, which exposed the dismal living conditions in the city’s low-income neighborhoods. “We’ve had this debate about minimum wage in Baltimore before, and the actions of the city have not been enough. This year has to be different – because last year was different. Baltimore has to change its ways,” she says.