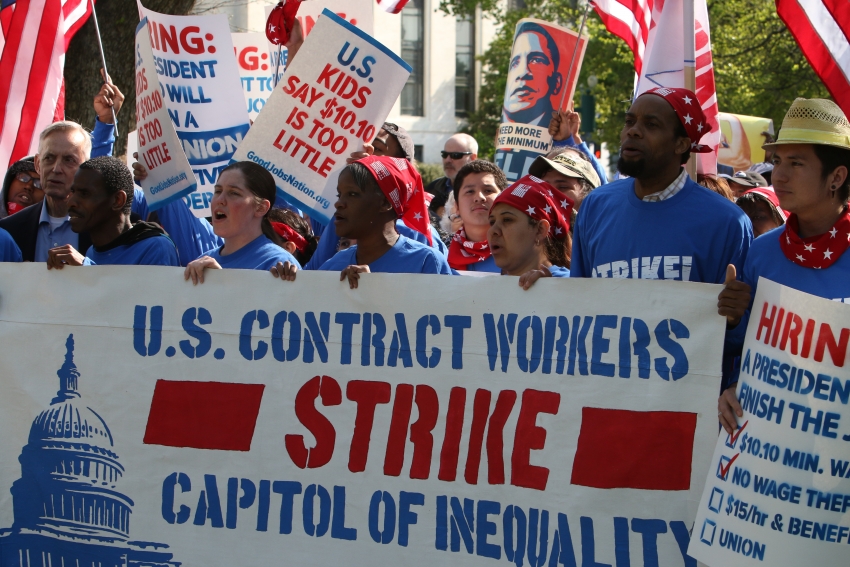 Bowing to the demands of thousands of angry Teamsters, the federal Government Accountability Office (GAO) has agreed to conduct an inquiry into the past investments of the Central States Pension Fund, the organization that manages the retirement benefits for more than 400,000 union members, both retired and active.

One goal of the inquiry is to determine whether Goldman Sachs and other investment advisors caused the Fund to lose money, endangering the future pensions of retired truck drivers and other Teamster union members.

Rep. Marcy Kaptur (D-Ohio) hailed the GAO action as a victory for workers, many of whom have been pressuring Congress to take action on behalf of the pensioners.

“It’s astonishing to now read about how Wall Street firms hired by Central States invested retirees’ pension funds in Iraq in 2008, right in the middle of a full-scale war in Iraq. Or how they invested in unstable Russian banks, when the economy there is in shambles, or how they sunk $1.4 billion into risky Single A-rated mortgage-backed bonds in the middle of the housing meltdown. Something is simply wrong, and the GAO will get to the bottom of this,” she said.

Behind the GAO review is the conviction by some of the retirees that investment advisors like Goldman Sachs and the Chicago-based Northern Trust Corporation profited off the Fund by pushing questionable investment strategies while raking in exorbitant management fees. If true, a full accounting might lead to a return of some of the money lost and partial repairs to the damaged finances of the Fund, pension activists say.

“The pension plan lost $11 billion in a 15-month period,” while Goldman was advising the plan, and Goldman should pay some of the money back, said Leroy Goans, a retired union truck driver in Cincinnati.

Hopes that the GAO report will lead to a massive recovery that will ensure existing pension benefits may be overblown, but the inquiry is worth pursuing nevertheless, says Norman Stein, a senior policy advisor to Pension Rights Center, a Washington, D.C.-based advocacy group that is advising the Teamster retirees.

Stein pointed to a lawsuit against Northern Trust that was settled last year, in which Northern Trust agreed to make good on pension plan investment losses involving some of its other clients, including the Chicago Teachers’ Pension Fund.

“I don’t have specific knowledge regarding Northern Trust, but the case illustrates that pension plans can sometimes recover losses when its advisors behave improperly," he says.

But Stein expressed doubts that a lawsuit brought by Central States, even if meritorious, could recover sufficient sums of money to make a real difference in the plan's financial health.

“Having the GAO look at this is a worthwhile thing to do. The question is open on whether it will wind up helping the pensioners,” who face the threat of benefit cuts in the future, Stein says. “We just need to be patient and let the GAO do its job” of a thorough review.

According to a spokesman at Northern Trust, it has served as a court appointed “named fiduciary” to the Central States Pension Fund since 2005, with responsibility and authority to control and manage the investment of certain assets of the Fund.

“From inception through Dec. 31, 2015, the Northern Trust portfolio has generated returns in line with its benchmark. The investment losses stemming from the global financial crisis of 2008 were fully recovered and are not a primary reason for the plan’s funding gap,” spokesman John O’Connell said in an email.

As reported by In These Times, chronic financial problems with the Central States Pension Fund are threatening to force cuts in the pension payments to hundreds of thousands of retirees. Rep. Kaptur summed up the problem by estimating the plan has about $16.8 billion in assets but long-term pension benefit obligations of $35 billion. Without benefit cuts, or an infusion of new money, the plan ultimately faces insolvency.

Kaptur was one of the first members of Congress to come forward as an advocate for the Teamster pensioners when they launched a grassroots campaign last year to block proposed cuts. Congressional supporters of the campaign have been growing steadily in number since then, and a formal request by Kaptur and Sen. Sherrod Brown (D-Ohio) for the GAO to review the records of Central States was co-signed by more than 40 House members and 10 members of the Senate.

A bill jointly sponsored by Sen. Bernie Sanders (I-Vt.) and Kaptur—the Keep Our Pension Promises Act (KOPPA)—now has 10 co-sponsors in the Senate and 52 co-sponsors in the House. Because all of the co-sponsors are traditional pro-labor Democrats, activists like Goans are not optimistic the bill will pass in its current form, but believe that continued lobbying of Republican members of Congress could produce a compromise.

“I think there are Republicans who want to solve this problem. I don’t think anybody has hit on exactly the right solution yet, but maybe the GAO will move us in the right direction,” Goans says.