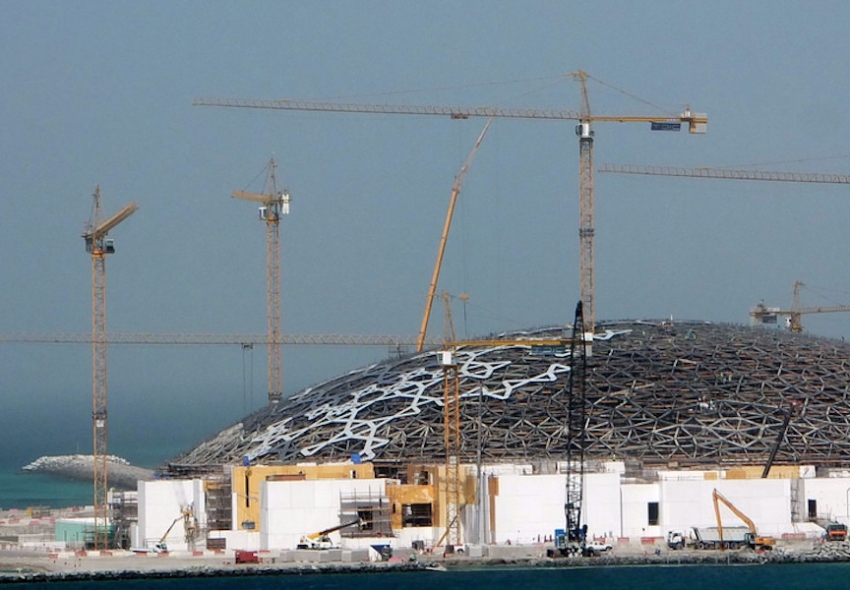 Over the past decade, the United Arab Emirates, Qatar and other Gulf States have started buying up franchises—and not just McDonald’s. These days the Gulf States are purchasing branches of universities like NYU and museums like the Guggenheim in New York City, part of peppering their societies with the “obligatory landmarks for the global investor class,” in the words of NYU professor Andrew Ross. Ross is part of a network of artists and university professors trying to change the absurdly onerous labor conditions facing guest workers in the Gulf.

In Qatar, while exact figures are disputed, perhaps over a thousand workers, mostly South Asians, have died during construction for the World Cup. Employers hold onto passports of imported laborers and deport them if they get too restive, drawing on the massive human well created by the agricultural misery of South and Southeast Asia.

Such penury (rural South Asia holds nearly half the world’s poor) contrasts sharply with the opulence of the Gulf. In the desert cities of the peninsula, air conditioned skyscrapers contain ski slopes. Sand islands, built by European engineering firms, rise up from the sea. Meanwhile, the rights of those constructing these towers and islands are nearly nonexistent.

This maltreatment, and the attempts to resist it, are the topic of The Gulf: High Culture/Hard Labor, edited by Ross, a lustrously illustrated chronicle of the efforts by the Gulf Labor Coalition to throw sand in the machinery of the repression and exploitation confronting guest workers in the Gulf.

This coalition and its offshoot, the Global Ultra Luxury Faction, have spent the last five years working from their location as mostly New York City-based artists to disrupt the extremely unequal status quo in the UAE.

They have—mostly fruitlessly—been attempting to negotiate on workers’ behalf with those helming the various cultural institutions setting up shop in the UAE, nearly all of which rely on migrant labor for building their facilities. The coalition has demanded living wages for imported workers, the benefit of freedom of association as well as bonuses for the workers to compensate for outrageously high debt burdens that nibble away at their wages, preventing them from sending money back to their home villages.

Such demands have been made to the Guggenheim leadership through letters, conversations, and petitions which have gone largely ignored. The chief success of the coalition has been raising the visibility of Gulf labor malpractice, “exposing the role played by museums in showcasing, laundering, and magnifying wealth accumulation among the ultra-luxury class” that dominates the modern art-world, as Ross writes.

The Gulf is a mostly useful account how the coalition has raised this visibility, including actions such as occupying the façade of the Guggenheim with a projection calling it a museum of the one percent, and leafleting and bugling within the museum.

But in mainstreaming this knowledge of human rights abuses, the book is not without tensions.

The inclusion of an opening chapter by Leah Whitson of Human Rights Watch (HRW) was a bad call. Whitson gushes over how the struggle of the artists and activists “has allowed us to find our own strength in globalization, where the interconnectedness of economies, businesses, and institutions has created opportunities for activists to press for accountability.”

Put to the side any general cynicism over HRW (it seems to exist largely to watch for human rights violations in countries the U.S. government is itching to invade, sanction, or let loose proxy armies against). Globalization has not precisely been a golden goose for South Asia, or at least its poorer segments. It was the globalization of U.S. agricultural expertise through the Green Revolution in South Asia which exacerbated the massive rural poverty which has led to workers migrating abroad. It seems, then, slightly worse than clueless of Whitson to praise such elite-driven interconnection of businesses and economies, since they are exactly what have produced the problems of economic dislocation in the first place.

Matters of class and power emerge far more forcefully in the excellent chapter by Paula Chakravartty and Nitasha Dhillon. The authors note that the Gulf is experiencing a metastatic capitalist growth amidst the post-2001 oil boom. But transnational capital and labor fluxes and flows are nothing new. As they show, in the 1970s and 1980s the Gulf countries were both very different and very similar to their current state. Newly awash in rivers of petrodollars from the quadrupling or more of oil prices throughout the 1970s, the countries began building booms.

Plainly, the Gulf States and their Western allies were not happy with this arrangement, and sought out a labor force sheared off linguistically and culturally from the Arab population. Enter the age of the South Asian guest worker. They flowed often from Kerala in India—a Communist stronghold in the country, where poor people have been far better off than in other regions. Other Indians from the country’s poorer regions, often those most devastated by the deteriorating national agricultural system, flowed to Kerala, filling the gap in the labor force left by expatriates working in the Gulf. Chakravartty and Dhillon speak with labor organizers in the region and elsewhere, showing the global nature of the system within which labor lurches from one country to another in search of better employment.

The authors in the chapter do an excellent—and vital—job of showing the United States’ centrality to Gulf capitalism. Such a perspective contrasts sharply with the rapidly growing mainstream literature, which lambasts the United States government for its relationship to Saudi Arabia but fails to note that this “special relationship” is not a U.S. error but a U.S. interest.

Saudi Arabia has supported U.S. proxies world-wide with money and arms. Ideology, finances and arms flows closely tie it to right-wing extremist groups from Pakistan to Palmyra. Since even the mainstream press is increasingly reporting on this phenomenon, many suggest that the U.S.-Saudi “special relationship” is a strategic error, the tomfoolery of the U.S. government acting against its own interests.

Chakravartty and Dhillon deftly avoid this dead-end. They show the absolute centrality of Saudi Arabia and the other Gulf states to U.S. foreign policy. In the process, they not only provide an effective analysis within which to understand the work of the Gulf Labor Coalition, but also note the challenge of having a “clear understanding that we are complicit in the conditions that force a worker to leave his or her home.”

The book also shows great awareness of the risks and challenges inherent in building a coalition spanning continents, meant to simultaneously challenge high-flying cultural institutions and to better the lives of workers across the world. In a way similar to the cultural boycott of Israel—and it is probably not a coincidence that many of the contributors to the book are also linked in some way or another to the efforts to boycott Israel—the book importantly touches on the “class” elements of cultural boycotts.

For example, Doris Bittar writes about the capacity of artists not merely to view themselves as part-and-parcel of the luxury art world, but frustrated laborers, whose work, like that of all laborers, is exploited by those with more power. The piece calls for a connection to the “labor movement [to] influence legislation that concerns artists [to] set compensation standards with museums, and [to] leverage them to support the communities that artists create.”

Bittar calls on artists and other cultural producers to understand their location as not merely that of leveraging relative social privilege to assist those with less power in the world. Instead, she identifies herself as not merely morally on the side of the powerless, but among those who are, at least from one angle, powerless in the current system. This perspective is less about Check Your Privilege and more about entering a joint struggle from different locations. In this case, the shared interest of poor artists like Bittar and poor workers in Qatar in challenging the capitalist system which oppresses both.

At the level of day-to-day politics, the book is teeming with useful perspectives and introspection on the role of artists in challenging this system. One wishes, though, that the editors had woven in a more consistent focus on the fundamental role of the U.S. government in propping up the Gulf states. From literally building up their infrastructure, to arms sales, to Gulf Cooperation Council investments in U.S. bonds and U.S. securities, the ties that bind the U.S. to the peninsula in the wake of the phased 1970s-era British withdrawal are many and deep. Many of these countries have made sure to carry out U.S. policies, from containing Iran to containing their own population, from spreading reaction and oppression from Tunisia, to Egypt and onwards.

So perhaps it would have benefited more, too, from a more sustained focus on the U.S.—not merely as a crucial enabler and beneficiary of this entire system, but an eventual pressure point and target for U.S. activists.