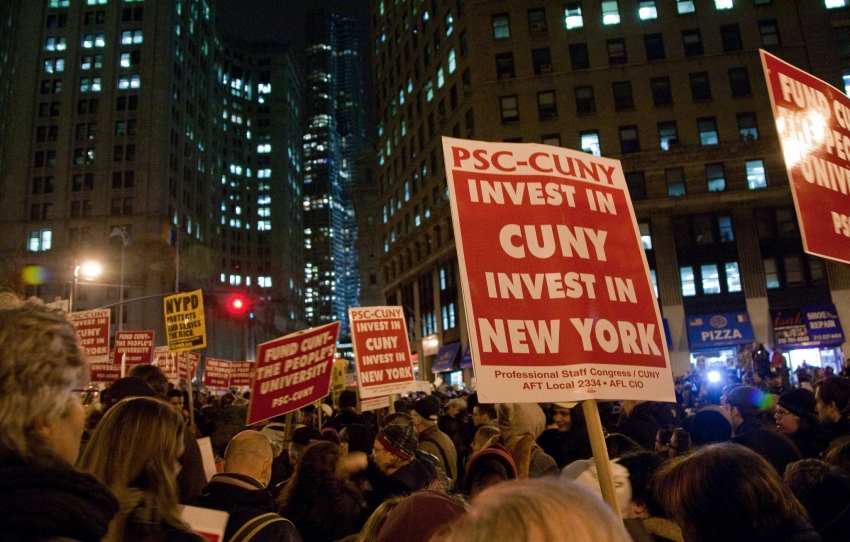 Over the past year, the union campaigned hard for a contract. In November, some 50 members were arrested at CUNY's central office while demonstrating for a contract. In May, 92 percent of members voted to authorize a strike. (Professional Staff Congress/CUNY/ Facebook)

After six years without a contract, City University of New York professors and staff will finally get a raise.

Members of the Professional Staff Congress (PSC), which represents more than 25,000 professors and staff at CUNY, voted overwhelmingly—94 percent—in favor of a new contract.

The deal is retroactive. It covers workers from October 2010 through November of next year. CUNY employees will receive a compounded salary raise of 10.41 percent, along with other benefits that include retroactive pay and health insurance for adjuncts.

"I am grateful for the members’ strong support for ratification of the contract and eager to begin work on what remains to be done. If we stay organized and remain in solidarity, a better university is within our power—and our power will continue to grow,” PSC President Barbara Bowen said after the results were announced this week.

Voting began on July 11 and ended Wednesday. The contract deal had already passed the union's delegate assembly on June 23; CUNY's board of trustees approved the deal on June 27.

Mike Fabricant, the PSC's first vice president, told In These Times that the "extraordinary" result will help to validate the agreement.

"(With) 94 percent of your membership voting yes, that speaks to a consensus that you're going to get," he said.

Fabricant cited benefits, such as a three-year appointment for adjunct professors, as reasons why members favored the contract. More than 86 percent of adjunct faculty who took part in the vote supported the deal.

Still, some were against it. They stressed the lack of pay parity and adequate salaries for adjunct professors.

Andy Battle, an adjunct professor at Hunter College, told In These Times that he voted against the contract. For him, it widened the gap between full-time faculty and part-time professors.

"Our union has to be an organization that resists this at every junction. It dismays me the leadership makes us accept this," he said.

Part-time professors make an average of $3,000 per course, with few benefits. Full-time faculty, on the other hand, tend to make much more.

"It shows we have a lot of work to do to reach not just activists, but also the broader rank-and-file (workers)," Battle said about the contract vote.

Fabricant said that achieving pay parity for adjuncts would require more than a contract. Rather, investment is needed from the state. For example, since New York Gov. Andrew Cuomo took office in 2011, per-student funding to senior colleges has declined by three percent.

"If you are disappointed in one part of a contract, join us to make it better," Fabricant said.

Battle agreed on organizing against state-imposed austerity, but questioned the methods taken by the union, such as lobbying.

"We need to be broad, and we need to be militant. The PSC will tell you they will reverse austerity, but the current leadership has been trying to do this for 16 years, and it hasn't had much of an effect," Battle said. "The only thing that politicians listen to is people in the streets.”

Fabricant said the union will begin talks with the administration about a new contract before the current one expires next year. But for now, the union is relieved this six-year chapter is over.

"We recognize there is more to do, (but) we need to celebrate victories," said Fabricant.

Brandon Jordan is a freelance journalist living in Queens, New York. He has written for publications such as The Nation, Shadowproof, Truthout and City Limits. Follow him on Twitter @BrandonJ_R.