National Democrats Back $15 Minimum Wage. Baltimore Dems, Not So Much. 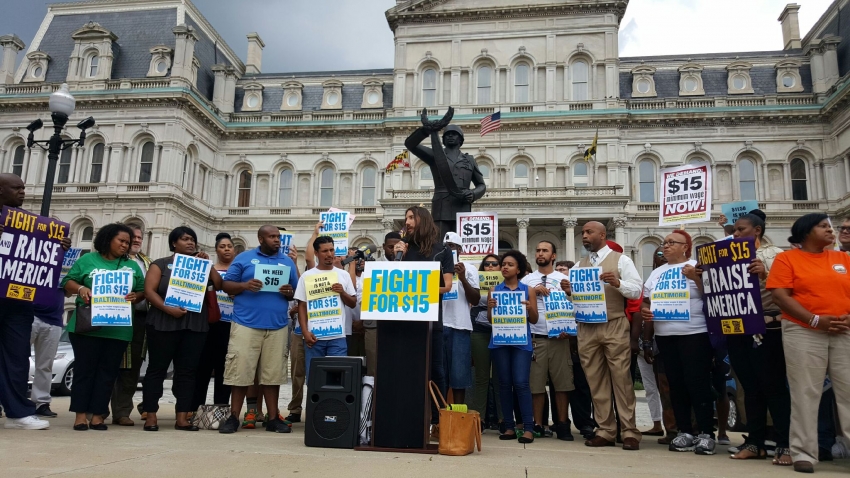 Union groups and other supporters of Fight for $15 rallied in front of Baltimore's City Hall ahead of a key vote on a new minimum wage law. At center is Michael Lastoria, a business owner of pizza places in Baltimore and Washington, D.C. (1199SEIU/ Handout)

Just two weeks after the national Democratic Party endorsed a $15 minimum wage as part of its presidential campaign platform, local Democrats in Baltimore are fighting to save a citywide $15 wage proposal from a sneak attack—from none other than Charm City Democrats.

In a tense City Council session Monday, legislation to establish the $15 minimum barely survived an attempt to kill it by City Council President Jack Young. The 15-member council—all Democrats, including Young—ultimately voted 7-4 (with three abstentions and one absence) to advance the bill to a final vote next week, where its fate remains uncertain. The bill is in real danger of failing, Councilman Robert Curran told In These Times, as advocates for the legislation have been unable so far to line up the required eight votes for final passage.

Earlier this year, Working Families and other advocates were confident they had nine firm votes in favor of the bill, but two council members who had previously expressed support have turned into opponents, Carter said. That means intense lobbying efforts will be crucial in the next few days to save the minimum wage law.

Carter expressed relief that the bill survived the Monday council meeting and pointed at Young as the leader of the clique intent on defeating it. Young took supporters by surprise in recent days, Carter said, with a behind-the-scenes effort to build voting strength for an amendment that would knock the proposed minimum wage from $15 an hour down to $11.50. He came close to succeeding, supporters told In These Times, and the outcome of Monday’s vote was uncertain up until the last minute.

Stacey Mink, spokeswoman for the 1199SEIU United Healthcare Workers union, said that Young had angered some labor leaders by pledging support for $15 earlier this year, only to shift his position.

“Jack stood with us in front of City Hall when we announced,” the introduction of the minimum wage bill, she said, “but something has changed his mind.”

Lester Davis, a spokesman for Young, disagreed. He told In These Times that the councilman still supports the $15 an hour minimum. Young’s position is that the higher minimum wage should apply equally to all jurisdictions within the state of Maryland, Davis said, because otherwise Baltimore would suffer in competition with surrounding counties that have a lower minimum.

“He is a strong supporter of $15, but statewide,” said Davis.

Mink stressed that a statewide increase to $15 an hour is impossible given the current political environment. In 2014, the legislature passed an increase in the state minimum wage to $10.10 by 2018 (it currently stands at $8.75) after a grueling political struggle.

Support for the bill has been driven largely by local labor unions. Rallying in front of City Hall before the vote Monday, members from 1199SEIU and the American Federation of State County and Municipal Employees (AFSCME) were prominent in the crowd. In the past, UNITE HERE Local 7 and the Metropolitan Baltimore Council AFL-CIO Unions have also been in the forefront.

Lobbying on both sides of the issue has been intense. The Baltimore Sun editorialized against the $15 minimum wage on July 25, repeating arguments advanced by business groups like the Greater Baltimore Committee and the Maryland Restaurant Association.

The minimum wage bill also took an indirect hit from Mayor Stephanie Rawlings-Blake, who holds the title of secretary of the Democratic National Committee. One of the city agencies under her control, the Bureau of Budget and Management Research, produced an analysis predicting that a $15 minimum wage would cause the city’s unemployment rate to jump to between 8.2 percent and 10 percent, up from the current rate of 6.5 percent. Even worse, the bureau predicted the job losses would fall most heavily on teenagers, young adults and unskilled workers.

Lobbying has already been successful in convincing pro-$15 council members like Curran to soften the first version of the minimum wage bill. The first version, for example, had intended for the $15 to be phased in gradually through 2020, but that has now been extended through 2022. In addition, a small business exemption was added so that the new law would not apply to workplaces with 25 or fewer workers. And an attempt to eliminate the sub-minimum wage for so-called “tipped workers” (largely restaurant and hotel workers) was quietly sidelined.

But these concessions are not enough for the Greater Baltimore Committee, which is leading the effort to defeat the bill. The group has been lobbying furiously against the bill for months and this week issued a call to action to its members to turn up the pressure even more. Committee spokesman Mark Guidera told In These Times that the group had sent out a bulletin to members following Monday’s vote, urging business owners to zero in on selected members of the council to lobby for a final defeat of the $15 bill next week.

“I’m not conceding anything,” to the opponents of a $15 minimum wage, said Carter.