Labor Board Says Trump Broke the Law, Orders Him to Negotiate with Las Vegas Union 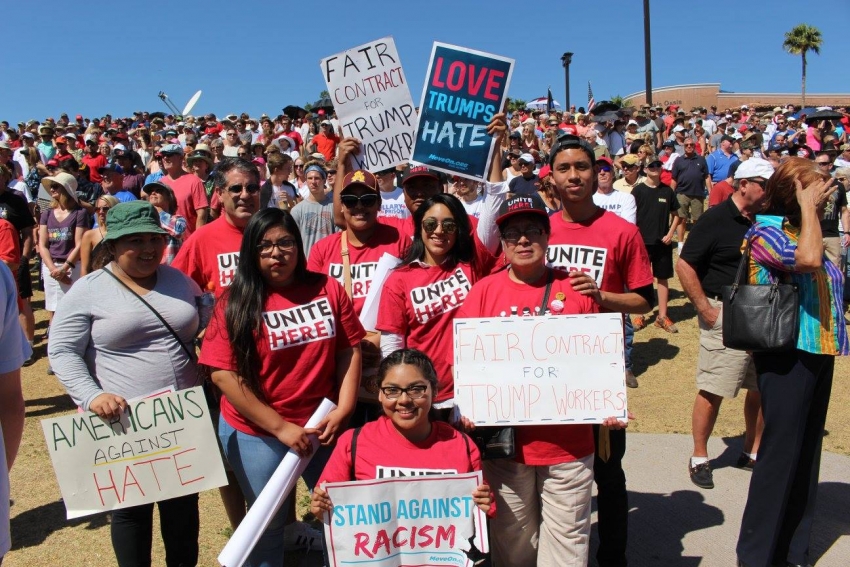 UNITE HERE has launched a national boycott of all Trump properties in an effort to force management to the bargaining table. (Culinary Workers Union Local 226/ Facebook)

Whatever happens in the presidential election this week, the Las Vegas-based Culinary Union won’t let up in its campaign against Donald Trump.

The union’s argument against Trump goes deeper than the vague threats, promises and generalities that pass for presidential debate—the argument is about some 500 jobs in downtown Las Vegas, right at the beating heart of the union.

Culinary Workers Union Local 226 has been trying to organize a union at the Trump International Hotel Las Vegas and is making slow but steady progress. It scored a major victory last week when the National Labor Relations Board (NLRB) ordered hotel management to begin bargaining with the union over wages and working conditions for about 500 housekeepers, food and beverage staff and guest service workers.

The NLRB order follows an election last year in which employees voted 238-209 in favor of Local 226, an affiliate of UNITE HERE.

“The National Labor Relations Board has consistently told Donald Trump and his company that the union election wasn’t rigged and that he must sit down and negotiate with the Culinary Union,” said Geoconda Arguello-Kline, secretary-treasurer of Local 226, in a statement.

“Mr. Trump is breaking federal law and Trump Hotel Las Vegas is operating illegally. Mr. Trump should accept the federal government’s order to negotiate and treat his workers with respect,” he stated.

The NLRB order is specifically aimed at the Trump Ruffin Commercial LLC, the corporate entity that controls the joint venture between Trump and local casino owner Phillip Ruffin.

The union has complained bitterly that Trump and Ruffin have been using illegal tactics to block the union, despite the clear election victory. In the run-up to the vote, they hired the well-known union busting consulting company Cruz & Associates to help defeat the union.

In September, UNITE HERE launched a national boycott of all Trump properties in an effort to force management to the bargaining table. The boycott has been supported by the national AFL-CIO.

“Donald Trump’s a disrespectful hypocrite, and we stand in solidarity with the workers at Trump Hotel Las Vegas,” said AFL-CIO President Richard Trumka. “His unwillingness to bargain with the hard-working people who make his hotel successful is shameful. It tells you all you need to know about his feelings toward all working people.”

Both UNITE HERE and AFL-CIO have endorsed Hillary Clinton in this year’s presidential campaign.

"Donald Trump likes to brag about his skills as a negotiator—but yesterday, he had to be ordered by the National Labor Relations Board to stop breaking the law, respect his workers’ fundamental rights to organize and bargain collectively, and come to the table,” Clinton said last week. “It’s appalling, but it’s not surprising.”

Early indications are that the Local 226 campaign may have hurt Trump’s presidential hopes.

In Politico Magazine, Nevada political journalist Jon Ralston reported heavy early voting by Latino voters in Las Vegas. Many had to wait in line for hours.

Ralston quoted a Twitter post from Yvanna Cancela, political director for the majority Hispanic Culinary Union: “Looks like Trump got his wall after all. A wall of beautiful voters.”