Only Organized Labor Can Save Illinois from Crisis 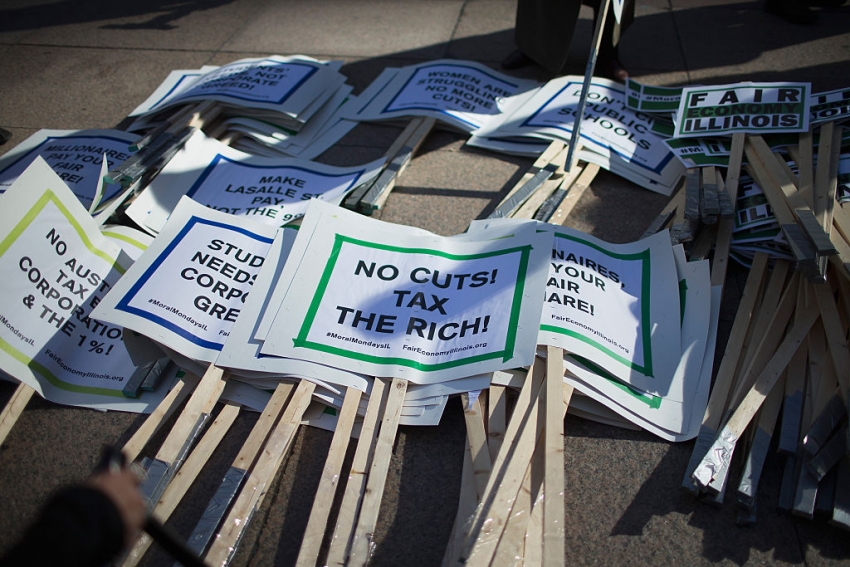 The labor movement remains the most potent weapon working people in the state have to overturn austerity and increase investment in the public good. (Photo by Scott Olson/Getty Images)

Illinois is heading for a major crisis. It has been more than a year and a half since the state had an official budget that appropriated funds for basic services. And, as of this month, the coffers will dry up and a public sector already on life-support will quickly slip into critical condition.

For the millions of ordinary Illinoisans who rely on the state’s network of public institutions, the situation is dire. For the state’s near-billionaire Republican governor, however, things appear to be going exactly as planned.

“We've become a collectivist economy in Illinois,” Gov. Bruce Rauner recently told the Chicago Tribune. “It's crushing us. And no problem is going to get fixed unless we bring more economic freedom into the state. And I believe that very passionately."

To be clear, when Rauner talks about a “collectivist economy,” he’s attacking anything meant to serve the public or advance the common good, which includes everything from public schools and universities, to health agencies, transportation and so much more.

Rauner will be further emboldened by the Republican victories in November—and this makes the need to build a united front against his agenda all the more crucial. The only force capable of building that front and winning is organized labor. The strategy of passively awaiting rescue from the Democrats has led us into the mess we’re currently in.

Consider how things have gone in Springfield for the past two years. Rauner has used his veto power as governor to prevent any full state budget from being passed until the Democrats, who have substantial majorities in both chambers of the legislature, cave in and support his so-called turnaround agenda. That agenda proposes across-the-board cuts to higher education spending, severe cuts to other state services such as medical care and a weakening—if not outright elimination—of collective bargaining rights for public sector workers in Illinois.

The governor is willing to bring the state to the brink of collapse to get his way. The result is that Illinois is the only state in the country that hasn’t had a full budget for more than a year and a half. Granted, Rauner and his allies realized that the chaos their hostage-taking tactics are causing might cost them votes, so they cynically allowed a shoe-string, stop-gap partial funding bill to pass the legislature in order to cushion the impact of their blows until after the November elections. But at the end of last month, the stop-gap funding bill ran out.

Still, much of damage caused by Rauner’s arrogant fiscal brinkmanship is already done, so in a sense his onslaught has already borne fruit. This is especially true of Illinois’s once renowned system of higher education.

As someone who works at a state university, I see the damage caused by Rauner’s policies first hand. The attacks on higher education in the state reverberate throughout the halls and classrooms at Northeastern Illinois University, where I teach. You can see it in the low morale among faculty, in the mood among students in the classroom, in the general sense of uncertainty about the future of the school. Student financial aid is being threatened and university computer labs are boarded up with signs that they are indefinitely closed until the budget crisis is resolved. Countless other schools are in similar straits.

The stop-gap funding bill passed last summer has postponed the prospect of immediate destruction, but the long-term prognosis remains unclear at best—and apocalyptic at worst.

Rauner is not the sole culprit

How did we get into this mess? And, more importantly, how do we get out of it?

Rauner’s goals and methods are disastrous. But it’s important to point out that the contrasting proposals of Illinois Democrats also leave much to be desired. Democrats have agreed to modest cuts to higher education—nothing near Rauner’s demands for a 20 percent cut for the 2016-2017 fiscal year and a 30 percent cut for the previous year, but still very damaging on top of the decades of cuts that the system has already endured.

What’s more, the dysfunctional regime in Springfield has, for the most part, been steered by Democrats who have governed by ransacking pension funds for workers, doing dirty deals with private sector financiers, and keeping in place one of the most regressive state tax systems in the entire country—all while underfunding education, transit, health and more.

This statewide mess is the reason Rauner was able to sneak his way into the governor’s office in 2014. Like President-elect Donald Trump, Rauner sold himself as a populist insurgent taking on a caste of corrupt machine politicians. And, like Trump, Rauner eked out a victory because of extremely low turnout and widespread disaffection among voters with the status quo.

So, what can be done? The first step is to recognize that the political class in Illinois has consistently underfunded education and other public services for decades. Rauner isn’t the only culprit. The deeper problem is that there is a sweeping bipartisan consensus in favor of austerity—in favor, that is, of forcing the working-class majority of the state to pick up the bill for the global economic crisis through accepting budget cuts and diminished living standards.

This consensus must be broken and defeated. Let us not forget that we live in one of the richest countries on the planet. And Illinois is a very wealthy state, with scores of billionaires and the 13th highest per capita income. There are massive private concentrations of wealth in the city of Chicago. There’s no reason why we should cut a single cent out from the education budget. On the contrary, we should be expanding investment in education as other states are doing.

It wouldn’t be hard to do. If Illinois adopted the same graduated income tax system that Iowa has, more than $6.3 billion could be raised annually in additional revenue at the same time that the majority of taxpayers would pay at a lower rate. Illinois could also adopt a financial transaction tax—for example, by charging traders on the Chicago Mercantile Exchange a small fee of $1 per transaction—to raise substantial new revenue.

From a purely technical perspective, the solution to the crisis is simple: no cuts, tax the rich. The politics of how to get from here to there, however, are anything but straightforward.

Many in the labor movement are understandably anxious to get rid of Rauner. This is as true of my own union, the Illinois Federation of Teachers (IFT), as it is of any other. But this single-minded focus on Rauner is a losing strategy. It is a recipe for managing the continuing decline of the state, not for taking it forward. Our fundamental opponent isn’t Rauner—abrasive, unlikable, unpleasant and reactionary as he is—but the broad government consensus in favor of austerity and neoliberalism.

The labor movement is the only force capable of breaking this consensus. To be sure, compared to its relative heyday in decades past, the Illinois labor movement is weak. But it remains the most potent weapon working people in the state have to overturn austerity and increase investment in the public good. Illinois still has 847,000 union members, and there are scores more in the ranks of the unorganized who would gladly join them. If united and mobilized, workers have immense power to turn the tide in Illinois and beyond. Mobilizing union membership means more than simply bussing people to protest in the state capitol, however. It must involve a willingness to consider workplace actions of various kinds, especially strikes.

To my knowledge, the only large-scale job action initiated by a union that demanded increased state investment in education was the strike led by the Chicago Teachers Union last year. Though it lasted only one day, the April 1 strike had a powerful short-run effect on public debate about the budget crisis. Suddenly it became much more realistic to talk about raising new revenue by taxing the wealthy, when only a few months earlier public discussion centered on how deep cuts should go.

As I see it, the April strike was an opening salvo in what must become a larger, sustained, statewide fight against Rauner and his enablers. What, for example, would it look like if my own union, the IFT, mobilized its 100,000+ membership for a statewide walkout demanding the passage of a state budget that fully funds public education in Illinois? What would it look like if other unions joined the action? And how could this move, in turn, be leveraged to twist the arms of reluctant politicians as well as galvanize organizing efforts to increase the ranks of union members?

We won’t know until we try. And try we must.

Surely Rauner’s determination to crush AFSCME in Illinois is reason to consider joint job actions with workers in other unions. So, too, could Amalgamated Transit Union (ATU) locals 241 and 308 join in and ratchet up the pressure. ATU represents more than 10,000 public transit workers who are currently getting a raw deal from Chicago Mayor Rahm Emanuel’s appointed Chicago Transit Authority czar in ongoing contract negotiations. The list of unions under the gun goes on and on.

The time has passed to depend on unreliable Democrat politicians to look out for our interests. We need to find our voice and chart our own path—for our sakes, for the sakes of students and all those who depend on public services and, indeed, for the future of the state as a whole. The attacks are sure to keep coming and the only way to defend ourselves is to harness the fact that we—not the Rauners or the Trumps—are the ones who make Illinois run.

Tyler Zimmer teaches philosophy at Northeastern Illinois University and is a member of University Professionals of Illinois, Local 4100, IFT, AFT.