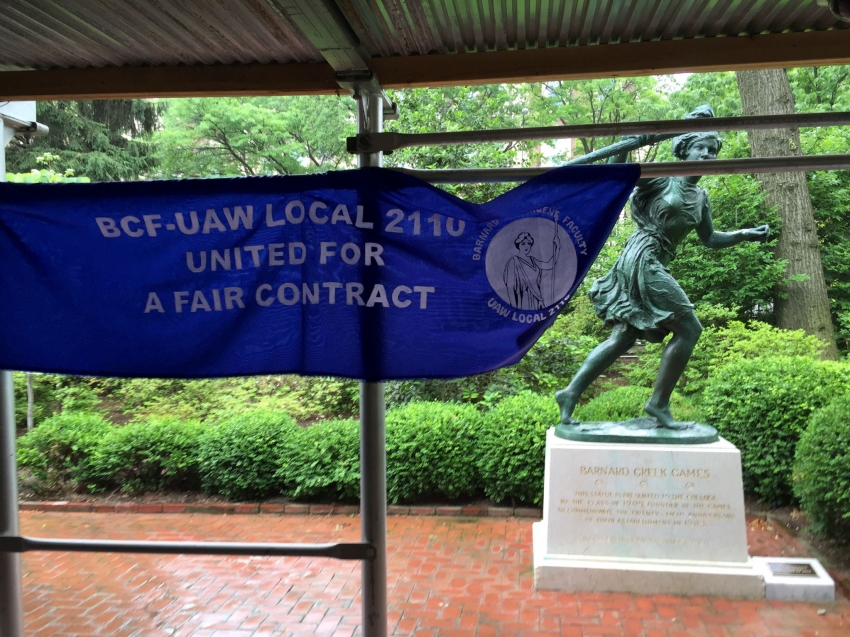 The contingent faculty at Barnard College have won their first contract, adding another victory for precarious academic workers across the country.

Barnard Contingent Faculty-UAW Local 2110 (BCF-UAW) is made up of about 200 adjunct professors and term faculty, predominantly women. It was certified back in October 2015 and had been negotiating with Barnard’s administration since February of last year.

In December, after getting nowhere, union members voted by an overwhelming majority—89 percent—in support of a strike. A strike date was set for February 21, and a tentative agreement was reached with just five days to spare. On March 26, BCF-UAW announced that a five-year contract had been ratified by its membership. More than 90 percent voted in favor.

"I think it's a strong contract. In some ways we had to compromise and there's room for improvement but we have a very good first contract and it creates a foundation for us moving forward," says Siobhan Burke, a Barnard graduate and adjunct lecturer of dance, who also sits on BCF-UAW's bargaining committee.

The main issues for members were wages, benefits, workload and job security.

Adjuncts will also have access to healthcare for the first time, with those teaching six or more credits in an academic year receiving a 50 percent contribution from Barnard for medical insurance costs.

And in the area of job security, adjuncts will have access to some severance and be able to receive multi-year appointments. They will also receive earlier notification of their teaching status and course loads, under the new contract.

"We are pleased that the Barnard Contingent Faculty union has ratified its first contract, which reflects the College’s deep respect for union members’ significant contributions to our community. We look forward to continue building a strong partnership with our contingent faculty, to ensure our students and our academic program flourish,” Provost Linda Bell said in a statement.

BCF-UAW's victory was in large part due to its mobilizing strategy.

"At each key step of the way—particularly organizing the strike authorization vote and preparing for a strike—we reached out to our members through phone banking, email, social media, informational meetings and one-on-one conversations on campus. Because many adjuncts juggle multiple jobs, it's a challenging group to organize. They're pulled in many directions. So staying in contact, keeping people informed and maintaining open lines of communication was essential," says Burke.

Barnard went to significant lengths to have contract negotiations go its way. The college hired notorious union busting law firm Jackson Lewis, and a federal mediator was brought in, showing how fraught the negotiations were.

Burke cautions that how Barnard respects the contract remains to be seen.

"Will they try to create new job titles that are outside the recognition clause of our contract? And find ways around the contract? Based on the process we went through, I wouldn't be surprised," she said.

Another major factor in BCF-UAW's victory was the role of student activism. When a possible strike was on the horizon, Barnard students mobilized to pressure the administration through the Student-Worker Solidarity (SWS) organization.

"In January and February, we started door knocking in the dorms and gathered more than 700 signatures on a student petition. At the same time, we encouraged students to get their parents to call the president and provost of the college," says Meghan Brophy, a Barnard student and SWS member. "It was a good way to talk to students who didn't know what was happening or who were only reading emails from the administration. I think we learned a lot of practical organizing skills from that experience, and it helped us remember to really see what information we needed to publicize more."

The group also spearheaded a number of actions like having students line the halls that Barnard's bargaining team had to travel down to reach the negotiating table, organized marches and helped to circulate a petition among alumni.

"The administration tries all these divide-and-conquer tactics like pitting financial aid and campus programs against living wages and benefits for contingent faculty. We want to show we will be united and not divided by all these tactics," said Brophy.

The irony behind an elite women's college trying to stonewall a bargaining unit that is predominantly women was not lost on students.

"When Barnard says that it advocates for women, especially women in the academy and higher education, they're speaking about a very specific subset of women,” said Becca Breslaw, a Barnard student and SWS member. “There are a lot of leaders that have come out of Barnard that they push for us that represent this corporate feminist appeal rather than advocating for all women, especially working-class women.”

Gerard Di Trolio is an editor for rankandfile.ca. He has written for Jacobin, Briarpatch and elsewhere, and lives in Toronto. Follow him on Twitter at @gerardditrolio.