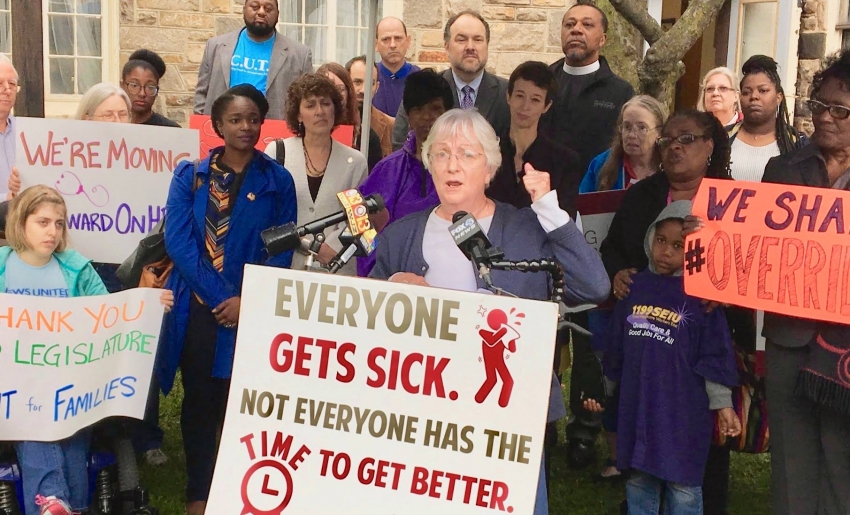 Maryland’s paid sick leave law would have guaranteed workers at businesses with 15 employees or more the right to a minimum of five paid sick days a year. (United Workers/ Facebook)

BALTIMORE—Maryland Gov. Larry Hogan ignited the anger of labor unions, workers’ rights advocates and religious groups when he vetoed high-profile legislation last month that was meant to guarantee the right of private sector employees to paid sick leave. That anger is now coalescing behind plans to override his veto and remove Hogan from office in 2018.

The sick leave issue is assuming center stage in the broader struggle statewide to repel attacks on the working class by President Donald Trump and other pro-business conservatives, says Jaimie Contreras, vice president at Local 32BJ of the Service Employees International Union (SEIU 32BJ). The union and allied groups are planning a joint campaign in Maryland to force a legislative override in early 2018, Contreras says, which will then segue into a broader electoral campaign to elect pro-labor Democrats at all levels of government across the mid-Atlantic region.

“By forcing workers to have to make hard decisions on matters of life or death, financial ruin or stability, Hogan is channeling the spirit of Trump right here in Maryland. Paid sick leave is common sense policy supported by an overwhelming majority of people on both sides of the aisle. On Election Day, working families will remember that Hogan put politics above their health and financial well-being,” said Contreras.

Aside from 32BJ, the union organizations most active in the paid leave effort have been the AFL-CIO, American Federation of State, County and Municipal Employees, 1199 SEIU, UNITE HERE and United Food & Commercial Workers. Also active have been the Amalgamated Transit Union, Communications Workers of America, Laborers International Union, Maryland State Education Association and National Nurses United.

Maryland’s paid sick leave law would have guaranteed workers at businesses with 15 employees or more the right to a minimum of five paid sick days a year. Out of more than 2.5 million private-sector workers in the state, it would have improved paid leave for around 700,000, proponents estimated—only a modest improvement in working conditions. Yet the law generated tremendous political ferment, with advocates forced to scale back the original proposal to meet objections from pro-business Democrats. At the same time, Hogan spoke out forcefully against the bill, asserting it would harm businesses and kill off job opportunities for Marylanders.

Hogan formally vetoed the measure May 25. His action infuriated many of the bill’s supporters especially because Maryland’s legislative rules will now force them to wait until the legislature reconvenes in January before taking override action.

“It’s shameless. They (legislators) give themselves the benefit of paid sick days, but not to the worker who cleans the office,” Contreras says.

“It’s really unfortunate that the governor is treating this like a partisan issue,” adds Crystal Hall, a campaigner with the Baltimore-based advocacy group United Workers. “This is really designed to benefit the hospitality, restaurant and retail workers who don’t get paid leave now. It’s for the low-wage people who need it most … I don’t think there is much partisan divide among the workers at fast food joints,” Hall said.

United Workers won’t be getting directly involved in the 2018 election, Hall added, but many of the members of the coalition backing the sick leave bill will be opposing Hogan’s re-election.

“There is a lot of frustration out there,” Hall said.

Democrats are chomping at the bit to begin the 2018 gubernatorial campaign, according to a recent report from the Baltimore Sun. There are at least eight serious candidates and several of them are solid progressive, pro-labor contenders, says Charly Carter, executive director at the pro-union Maryland Working Families. Working Families intends to get involved in the Democratic Party primaries more extensively than in the past, she says, with the goal of unseating Hogan and broadening the base of anti-Trump political activists.

Contreras tells In These Times that he is on board for the dump-Hogan campaign and predicts that several powerful unions in the state will put unprecedented effort behind it.

“With Hogan, it’s all about corporate interests. He and Trump are on the same page,” said Contreras.