As Universities are Gutted, Grad Student Employee Unions Can Provide a Vital Defense 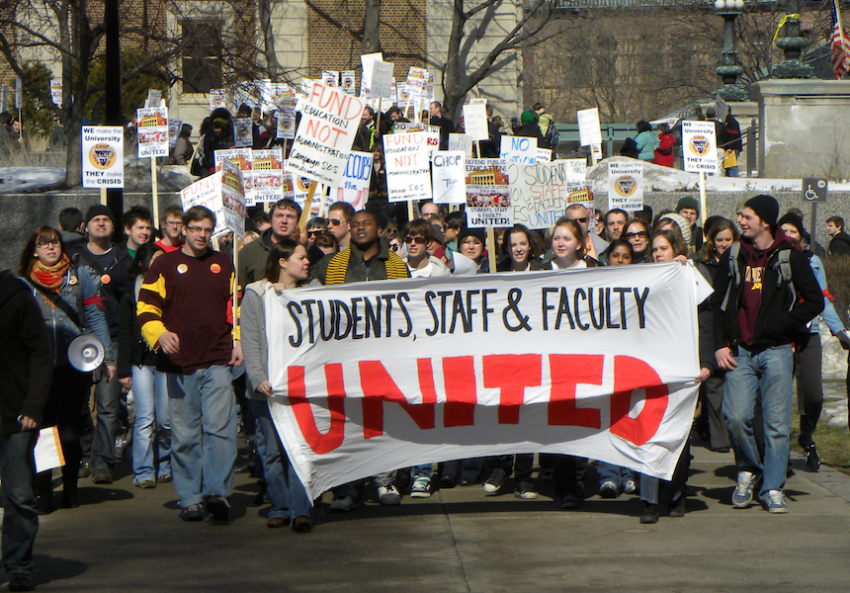 On the 2010 National Day of Action in Defense of Public Education, protesters marched against tuition hikes and layoffs that funded higher salaries for administrators. (Flickr, Fibonacci Blue)

The exploitation of academic workers has simmered for decades. Now, buoyed by a National Labor Relations Board ruling that graduate employees at private universities have the right to unionize, a new generation is organizing unions across private universities—defying a wave of pushback from administrations. Some students win (Columbia, Loyola). Some withdraw (Duke). Some get caught in a limbo of university appeals (Yale).

But all of these efforts are integral to the U.S. labor movement, as graduate workers challenge their own exploitation and the neoliberal decimation of the higher-education institutions that employ them.

I’m a graduate worker at Vanderbilt University and a member of the committee organizing to unionize 1,200 graduate employees. I attend graduate school out of a passion for learning, writing and teaching young people. I came here to critique Western intellectual history by analyzing social, economic and political issues. These matters impact my life and the lives of loved ones; they are not academic hobbies or intellectual fancies. Even lecturing is no mere academic exercise: Higher education is what fosters democratic citizenship. It cultivates capacities for critical self-reflection, engagement in public discourse and thoughtful participation in a rapidly changing world. We need these pursuits now more than ever.

And yet, this system demands that I participate by providing constant intellectual, physical and emotional labor, despite minimal job security.

Many scholars have already exposed the decline of education and the poor labor conditions of university educators. In his 2011 The Fall of the Faculty, Benjamin Ginsberg published a devastating analysis of the decline of faculty power. More recently, Elizabeth Anderson’s 2015 Tanner Lectures at Princeton, published as Private Government, chronicled dictatorial employment practices. And last month, University of Michigan dual-Ph.D. candidate Maximillian Alvarez penned “Contingent No More,” a manifesto criticizing the laissez-fare academic culture that perpetuates the “neoliberization of higher education.”

These writers illuminate the struggles of a new generation of faculty and graduate workers in academia. Burdened by insurmountable student debt and confronted by the machinery of U.S. capitalism, we fight just to survive.

Recent struggles in higher education are part of a long history of economic exploitation and domination over workers, problems that have pervaded U.S. society since its racist, genocidal and profit-driven founding. Whereas in the 1970s almost 80 percent of faculty were full-time, universities today have shifted to a contingent employment model. Non-tenure track faculty now compose 70 percent of the academic labor force, 41 percent of whom are part-time. Graduate workers are 13 percent of the academic labor force, almost 5 percent more than full-time, tenure-track faculty.

Why? Because contingent labor is cheap, and no tenure means we’re expendable. This allows universities to slash salaries for faculty while expanding bureaucratic administrations that obstruct grievance processes and legal redress.

All the while, faculty and students are left in the dark as to how university revenue is spent. The Illinois State Senate’s 99 Percent General Assembly 2015 Report on Executive Compensation notes that “tuition increases have coincided with a dramatic increase in administrative costs, including the size of administrative departments and compensation packages for executives.” Vanderbilt University’s Chancellor Nicholas Zeppos was cited by Forbes as the fifth-highest- paid university president in 2012, with an annual salary of $2.23 million. He and 35 other university presidents across America made over $1 million that year. Nearly 40 percent of university presidents are eligible for financial bonuses for increasing statistics like graduation rates, at the expense of faculty resources for research and conference travel.

For the administrative university, undergraduates—our students—have gone from ‘future leaders’ to ‘commodities.’

The generation of capital, rather than free and critical thought, is increasingly becoming the purpose of higher education. Deans see themselves as micro-CEOs, while provosts and chancellors view the university as a money-making venture. We instructors are the face of the university and provide the classroom education that students pay for, yet revenue we bring in doesn’t pay for our security. Instead, we are told that admission to a doctoral program is a gift, that our employers are benevolent, and that quiet gratitude is the only appropriate response to our conditions. They pretend this is enough to ignore watching us sink below a living wage, struggle with mental health with little support, and work ourselves to exhaustion.

Some call this trend the “corporatization of the university.” Anderson calls it “private government.” But my colleagues and I recognize it as a microcosm of America’s historically neoliberal and exploitative politics: an oligarchical dictatorship of administrators limits institutional and academic freedoms, all to fill their own coffers with goods purchased by the sweat of its underpaid workers.

Sabeen Ahmed is a PhD student in the Department of Philosophy at Vanderbilt University. She is interested in social and political philosophy and critical phenomenology. She is currently working to analyze refugee discourses through a critique of Western intellectual history.