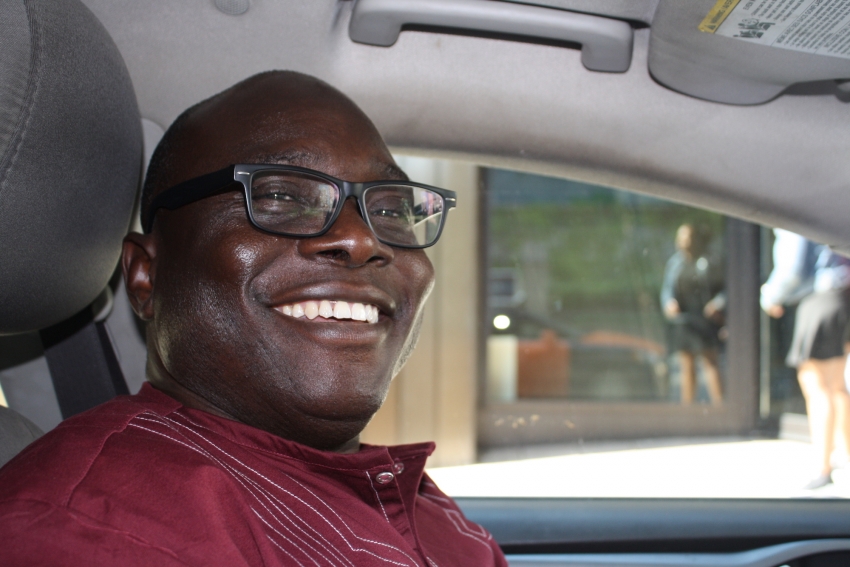 It’s 4 p.m. and Nnamdi Uwazie has taken in only $122, which means he has another five hours to drive to just cover his daily costs. Another 15-hour day in the cab and maybe nothing for him.

But this is how life has been lately for the 53-year-old taxi driver.

Since Uber and other ride-share businesses have crowded Chicago’s streets, his customers have become ghosts, and a livelihood that once sustained his family of five has virtually disappeared.

Two months behind on his rent, with unpaid light, gas and medical bills piling up, he struggles to stay positive.

Maybe he’ll get a customer going to O’Hare International Airport in the next few hours so he can earn some money today. Maybe Chicago officials, realizing the despair that has descended onto taxi drivers, will offer some help. Maybe the ride-share business will miraculously dry up.

Or maybe salvation will come from the work of the nearly two-year-old Cab Drivers United/AFSCME Local 2500, one of a handful of efforts to organize cab drivers in the United States. More than 2,500 cab drivers have signed with the union, and several hundred pay about one dollar a day in dues. Union officials say there are roughly 10,000 cab drivers in the city.

As the union explains it, Chicago’s cab drivers are on a downward spiral. More than 40 percent of the city’s cabs are off the road as compared to three years ago, according to the union.

“Right from the onset, I was involved when AFSCME came,” Uwazi says, listing the differences that the union has made for him and others.

The union helped him fill out the paperwork for government-supported healthcare, he says. It has helped bring down drivers’ lease and credit card fees. It has called for a solution and relief for a crippling problem facing some drivers.

The value of the medallions that they bought from the city years ago, largely on bank loans, have virtually been wiped out with arrival of ride-share competitors. Medallions are licenses that taxi drivers are legally required to have. Imagine stocking a store on credit, and then discovering that you will never earn enough to pay off the loan.

Six years ago, taxi medallions sold by the city were running as high as $254,000, according to public Chicago figures. The latest figures from the city show that peak has disappeared. Many are selling between $50,000 and $70,000, recent data shows. The union estimates that about 900 medallions are in foreclosure proceedings. Nearly four out of ten of the city’s 2,700 medallions are held by individuals, who own four or fewer taxis, according to the union.

In the morning, Uwazie and other drivers from the union met with officials at O’Hare airport, where the waiting time for drivers seeking a pickup markedly jumped up once ride-share drivers were allowed to receive customers at the airport. Since the taxi drivers complained recently, the airport has allowed food trucks to serve them while they wait, and agreed to offer more rest rooms in the waiting area.

“Because the taxi industry is mostly immigrant, the city treats us badly,” Uwazie says. Life in the United States was not what he expected when he arrived from Nigeria in 1997. There, he worked in a hospital laboratory and had two college degrees to bolster his career potential.

Uwazie began studying soon after his arrival, but his studies soon came to an end with the premature birth of a child and ensuing medical problems. “It was a big problem taking care of him and going to school,” he says. So, he searched for work. From valet parking, he quickly shifted to driving a cab, which eventually meant taking home $150 a day. Lately, he has been earning $50 on most days, but on bad days falling into a hole, unable to cover his lease and gas costs. His wife works as a home health care assistant for the elderly.

He tells himself that he needs a new start, and he’s considering community college training to be a physician’s assistant. He sees what frustration has done to fellow cab drivers—high blood pressure, heart problems—and wants to avoid it.

That’s why every morning at 6:00 a.m. when he gets in the cab and starts driving, he meditates on something positive: something just for the day, not for the future and not about his problems.

“But the only positive thing I say nowadays is my luck is going to change,” says Uwazie.  He is a hefty man, who smiles even when he mulls his worries. His English comes flavored with the the lilt of the languages he learned in Nigeria’s Biafran community.

And so, at the beginning of the downtown rush hour on a hot, sunny summer day, crowds rushing out of office buildings amid throngs of slow-moving tourists meandering by, he is hopeful.

Maybe he will get a long ride from a customer going home. Or maybe a ride out to O’Hare and after a long wait there, maybe a good paying ride back to the Loop. And maybe things will change. Maybe.