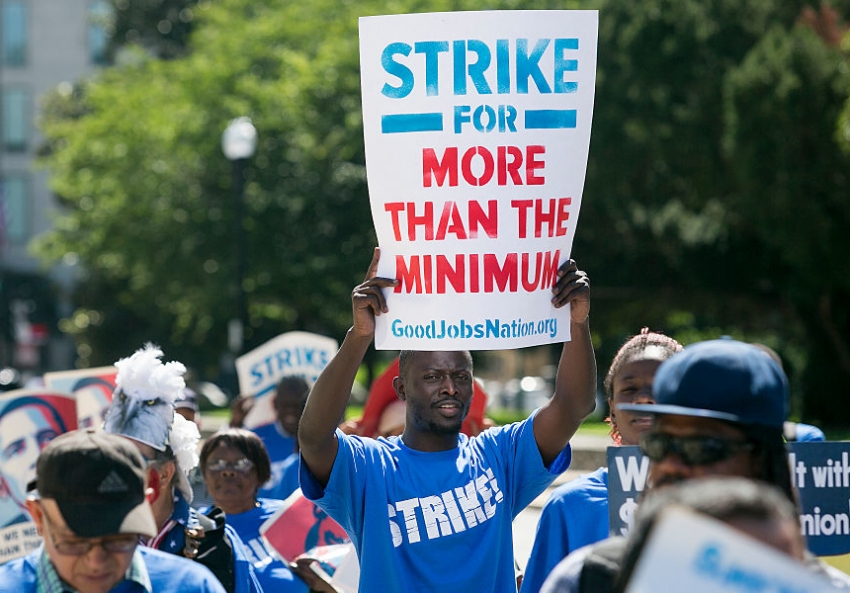 Protestors march in a rally on Capitol Hill in Washington to push for a raise to the federal minimum wage to $15 an hour, on July 22, 2015. (Photo By Al Drago/CQ Roll Call via Getty Images)

This article first appeared on Truthout.

Once more with feeling, the old debate rises into the headlines and the talk show circuit: Should governments — state, federal or local — raise the minimum wage or not? Employers of minimum-wage workers weigh in to say "no." But that raises a PR problem: It looks bad to advocate keeping workers' wages so low. So, they make a better-looking claim: that raising minimum wages causes some employers to fire low-paid workers rather than pay them more. Their opposition to raising minimum wages then morphs into an advocacy for low-paid workers to keep their jobs.

Workers and their allies mostly take the bait. They weigh in with counterarguments. These mostly respond directly, claiming that raising minimum wages does not lead to significant job losses.

Over the decades, professional economists and statisticians (increasingly overlapping sets) have entered the debate. Their entry resolved nothing. Every few years, the debate has flared up again. The economists write articles and books that enrich their resumes. Some score research grants from foundations, business lobbies and labor groups to prepare shiny new versions of the old arguments.

On the level of theory, it boils down to a simple idea: If the cost of hiring workers rises, other things unchanged, the hirers will employ fewer. To this simple idea, the other side counters with another: other things unchanged never happens. For example, they point out that raising the minimum wage increases employed workers' incomes and thereby their purchases. And that means more jobs. This "income effect," they say, will offset whatever job loss higher minimum wages might entail.

Of course, lots of other things also change while (and after) minimum wages are raised. Those changes, too, will have all sorts of effects on employment. There are way too many influences on jobs to know — let alone measure — them all. But none of the players in these debating games want to hear that. There are always economists and statisticians offering, at reasonable cost, yet another study that will, they often promise, finally prove "decisive."

Empirically minded economists, adept at statistics and their manipulation, have also seen an opportunity. While theory may not resolve the issue, turning to the facts surely will, they say. They promise that looking at actual, real-world outcomes — what happened to jobs when minimum wages have been raised in the past — will settle the issue. Both sides in the debate have deployed empirical as well as theoretical arguments for many decades.

Sadly, empirical studies proved as indeterminate as theoretical ones. To pick any historical example of a raised minimum wage and then examine how employment changed subsequently runs into the problem of whether other things are unchangedagain. To calculate the effect of a raised minimum wage on jobs, you must identify and exclude the influence on jobs of everything else going on when (and since) the minimum wage went up. And "everything else" is an infinity. No one can identify and measure all of the other influences exerted on a society during the time of a minimum wage change. Thus, we can never be sure that, in any given scenario, whatever happened to jobs after wages went up was an effect only of the wage increase rather than an effect also of "everything else" going on when and since wages rose.

Conservatives and employers finance, publish and circulate economic "analyses" (theoretical and empirical) to claim that raising the minimum wage will cause poor workers to lose jobs. Liberals do the same with labor unions, sympathetic religious organizations and civic groups to support economic analyses that claim no job effect from raising minimum wages.

The conservatives usually have far more money to buy and promote their analyses. Because they provide more financing to political parties, candidates and lobbying efforts, they make their "arguments" better known and are more effective in generating laws and regulations.

What actually happens to minimum wages depends little on these endlessly recycled arguments. It depends much more on the strengths of the two sides, capital and labor — what resources each devotes to shape politicians' and public opinion. For example, the U.S. federal minimum wage today is $7.25 per hour, down from $8.68 per hour, its historical high in 1968 (measured in 2016 dollars). Across the last half-century, as the wealth produced in the U.S. grew dramatically, cutting the real minimum wage 16 percent contributed significantly to the nation's growing inequality of wealth and income.

What we need is not another recycling of inherently unprovable claims. They have not worked to serve the interests of U.S. workers in having decent jobs and incomes. Quite the opposite.

The endless minimum wage debate has been a distraction. Our real political and economic choice is not whether to raise the minimum wage and risk some unemployment or to secure jobs by foregoing wage increases. Consider a parallel scenario: A mugger in an alley offers you the choice between suffering a stabbing or a beating so he can secure your wallet. Will you then agonize and debate over which offered option to choose? Rationality suggests otherwise. Why not refuse both and pursue a total alternative — an escape from the alley, an attempt to disarm the mugger, an appeal to the mugger's conscience — that is far more in your interest than either option offered.

So, it is with the minimum wage debate. It represents a kind of irrationality. Economists and others in solidarity with the laboring majority should be refusing further rounds of that debate. Instead, they should demand and pursue an economic system that provides both full employment and decent incomes, and support for those who cannot work. That is the only system that deserves our backing.

Richard D. Wolff is professor of Economics Emeritus, University of Massachusetts, Amherst where he taught economics from 1973 to 2008. He is currently a Visiting Professor in the Graduate Program in International Affairs of the New School University, New York City. He also teaches classes regularly at the Brecht Forum in Manhattan.