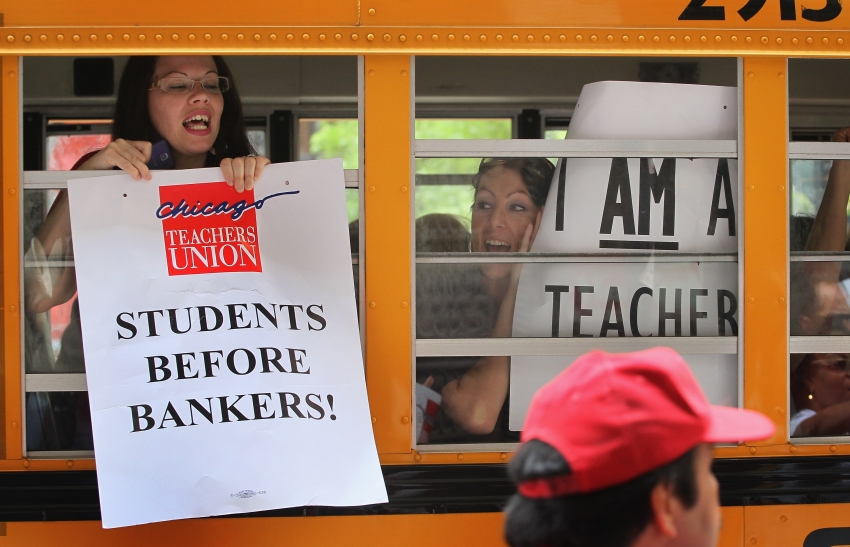 Chicago school teachers display protest signs from inside a school bus as they leave a demonstration outside the Chicago Board of Education building on June 22, 2011 in Chicago, Illinois. (Photo by Scott Olson/Getty Images)

In the summer of 1995, Adam Urbanski, president of the Rochester Teachers Association, and Helen Bernstein, former president of the United Teachers of Los Angeles (UTLA), organized a group of union leaders from 21 locals across the country to discuss how teacher unions might mobilize their resources to strengthen and improve public education. The Teacher Union Reform Network (TURN) launched one year later, and over the next two decades, the voluntary network would convene several times per year to share ideas on how their American Federation of Teachers (AFT) and National Education Association (NEA) locals could do things differently and better.

In October, marking a notable shift for this generally loose, informal network of locals, TURN released their first-ever national report—a chance, they say, to revitalize public education and strengthen democracy through “the collective wisdom of teachers.” The report emphasizes priorities that have been largely sidelined by corporate school reformers over the last few decades, such as strengthening citizenship, promoting racial integration and providing wrap-around social services. However, lacking a well-defined organizing strategy, it’s not clear how TURN’s ideas will amount to more than an aspirational blueprint.

The report is divided into four sections: promoting “learner-centered” schools, recognizing teaching as a profession, promoting excellence with equity and promoting collective bargaining for educational equity. Within each of these sections, TURN lays out policy ideas—ranging from the relatively specific (supporting pre-kindergarten and full-day kindergarten programs for all children) to the fairly vague (developing “authentic, performance-based and broad-based assessments”).

Funded by the Ford Foundation, the report has four lead authors with deep ties to the labor movement. Adam Urbanski is still president of the Rochester Teachers Association, and Ellen Bernstein is president of the Albuquerque Teachers Federation. Tom Alves is the executive director of the Sun Juan Teachers Association, and Richard Kahlenberg is a senior fellow at The Century Foundation. Urbanski told In These Times that between soliciting feedback from other TURN members at national gatherings and distributing the evolving draft for electronic input among their TURN regional networks, close to 1,000 educators helped them write it.

“This was a huge change for the TURN network to come to a consensus,” said Bernstein in an interview with In These Times, explaining that the project took them a little over three years to complete.

“We’re advocates of improving public education, not replacing it with charters and vouchers and privatization,” Urbanski said, emphasizing that traditional public schools can be leaders of change, and that the report “could be viewed as a summary of our learning over the last twenty years.”

TURN shares some similarities with another growing labor effort—Bargaining for the Common Good—whereby unions partner with local allies to push for more community-oriented demands in their contract negotiations, such as less punitive school discipline policies and more equitable access to healthcare. Although unions have generally been legally restricted to bargaining over little more than wages and benefits, more locals are coming to think that ceding to this legal reality without a fight is neither the right thing to do, nor something unions can politically afford.

Like Bargaining for the Common Good, TURN members also believe teachers need to approach bargaining more creatively and boldly. Specifically, TURN wants to see unions negotiate over policies that “advance student learning,” such as reducing the number of standardized tests students must take while also pushing for new kinds of assessments that measure skills like creativity.

Randi Weingarten, president of the AFT, told In These Times she can recall when her former union, the United Federation of Teachers (UFT) in New York City, became a founding TURN member. At the time, she says, UFT was seen as a “risk-taking” local for joining this reform-minded coalition. Today, however, Weingarten says TURN is seen not as unusual—but as the standard operating procedure for teachers’ unions. She added that AFT’s values are “very much aligned” with TURN’s. Weingarten, and the union is proud to join with TURN to turn their ideas into reality.

The NEA did not return multiple requests for comment.

Some rank-and-file teachers have expressed skepticism about the TURN report—and TURN more generally.

Peter Greene, a classroom teacher of 39 years and a member and past president of his local NEA chapter in northwestern Pennsylvania, thinks TURN has an interesting history, but “their main achievement seems to be finding unobjectionable broad descriptors for many of the same reform-y ideas” that have long dominated the debates. He says he thinks the four broad categories included in TURN’s report are innocuous enough, but finds its lack of specific details suspicious.

For example, TURN calls for “differentiated pay” for certified teachers—as opposed to a traditional steps-and-lanes salary schedule. However, TURN says this would be accomplished “without creating a zero sum game in which aid to colleagues reduces a teacher’s own chances of receiving a fair financial remuneration.”

Greene says the idea that school systems could reward excellence without turning it into a zero-sum game sounds nice. “But without specifics, it’s just magic thinking,” he argues. “School districts only have a finite amount of money. Everything is a zero sum game.”

Xian Franzinger Barrett, a public school teacher in Chicago, told In These Times that the report’s overall principles and vision tend to be positive. But given its lack of discussion about the root causes of educational inequality, he says TURN’s solutions seem insufficient. “It’s not enough to acknowledge that austerity, racial segregation and attacks on workers’ rights must end,” he says. “We must face the reality that these are design features of the system.”

TURN’s report asks how education can once again become the great equalizer, and Barrett argues this change will come through teaching students to use their own power to dismantle unfair systems. “Unfortunately,” he says, “most of the teacher ‘leadership groups’ neglect this focus of instruction and education.”

For now, TURN leaders like Urbanski and Bernstein remain optimistic about their network’s potential, and insist that a proactive, teacher-led policy coalition can and will change longstanding assumptions about unions, school reform and public education.