Oklahoma Poised To Cut Off 20,000 Disabled and Elderly People From Life-Sustaining Home Care 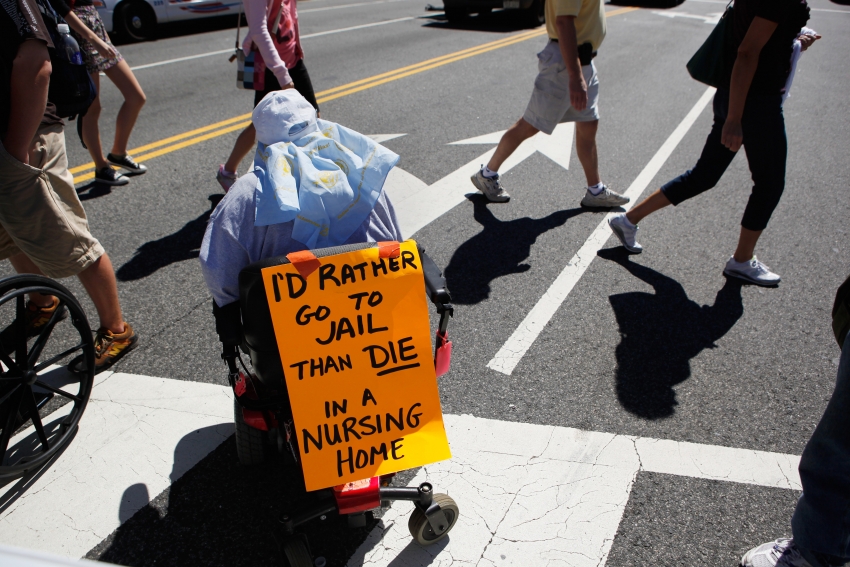 'Spitfire' Sabel of Philadelphia, Pennsylvania, joins more than 200 protestors from ADAPT, a grass-roots community that organizes disability rights activists to engage in nonviolent direct action, in blocking the intersection of 15th Street NW and Pennsylvania Avenue near the White House for nearly four hours September 20, 2010 in Washington, DC. (Photo by Chip Somodevilla/Getty Images)

In early November, the Department of Human Services (DHS) in Oklahoma sent letters to more than 20,000 disabled and elderly residents informing them that the in-home care services they were currently receiving as part of the ADvantage Waiver and In-Home Supports Waiver for Adults programs could be cut in one month. The full consequences of eliminating such vital programs are unimaginable but include reduced quality of life, poor health outcomes, extensive job loss and increased care costs.

I know firsthand that these cuts pose an existential threat to disabled people in Oklahoma, because I am a disability rights advocate and concerned waiver program recipient in Illinois. Medicaid waiver programs allow the disabled and elderly to receive long-term care services—such as bathing, dressing, toileting, feeding, cooking and cleaning—in their own homes, instead of institutionalized settings. These services are critical for protecting the rights and freedoms of the disabled and elderly—and allowing people to contribute to society as productive members. The programs ensure a higher quality of life for all recipients and are fiscally responsible for states, when compared with higher costs of institutionalized care.

So why would a state decide to eliminate these programs?

DHS says they have no choice. The state is facing a $215 million deficit in 2018. The agency needs $69 million to fund all the programs it is cutting, including the Medicaid waiver programs, for the 2018 fiscal year. Earlier this year, the legislature tried to increase the tax on cigarettes by $1.50 a box, but then lobbyists from Philip Morris USA and R.J. Reynolds challenged the increase and won at the state Supreme Court level. Frustrated lawmakers then attempted to impose a six-cent increase on fuel, which also failed, despite Oklahoma having one of the lowest taxes on fuel in the country.

Cutting vital waiver programs that provide life-sustaining care to disabled and elderly residents is not the answer to a budget shortfall. People who are unable to afford assistance on their own could see a dramatic erosion in the quality of their lives, or could even lose their lives. Thousands of workers will likely lose their jobs, and those who are lucky enough to go to a nursing home will cost the state at least three and a half times more. We cannot let Oklahoma get away with these cuts, nor can we accept this action as a dangerous precedent.

During the first part of November, the Oklahoma legislature did manage to agree on a stopgap budget, which dipped into the state’s rainy-day fund to finance the waiver programs through March 1, 2018. Beginning in February 1, 2018, DHS intends to send another round of letters explaining that the waiver programs will be eliminated.

This delay buys people like Richard Anderson an extra three months to find alternative care. Anderson is a founding member of the Oklahoma chapter of ADAPT, a national grassroots organization that advocates for community living. Thanks to the ADvantage waiver, he lives independently with cerebral palsy. “You’ll see people go into nursing homes, which ironically would cost the State of Oklahoma three and half times more,” he tells In These Times. “[The state] is leaving transitioning up to the individuals and their families, if they even have family.”

Anderson says that there are not enough beds available in nursing homes throughout the state to accommodate the influx of new people needing care—and that people will die without services.

The elimination of the waiver programs will also have a major impact on Oklahoma’s workers. More than 450 provider agencies will lose their main source of income, and it has been estimated that at least 10,000 nurses, home care workers and caseworkers will lose their jobs.

Many people with disabilities who are served by the program work or volunteer in their communities. Without the home care workers who get them ready for the day, they will be forced to stop participating in all aspects of society. The elimination will also impact the economic capabilities of family members who will have to leave the workforce to take care of their loved ones.

These cuts are poised to roll back decades of gains that were hard-fought by disabled communities. For the last 40 years, disability activists and organizations like ADAPT have tirelessly worked to gain the right to live in the community. Eliminating waiver programs will erase this work, and people with disabilities will again be shut out of the community.

We have seen this before. Until 2010, in Tennessee roughly 97 percent of people with disabilities lived in nursing homes. Residents in the 1990s and early 2000s were so desperate for freedom that a center for independent living in Memphis arranged for people to leave nursing homes in the middle of the night and flew them to Colorado, where in-home services were provided.

Activists say the law is on their side. Title II of the Americans with Disabilities Act (ADA) requires that, “A public entity shall administer services, programs, and activities in the most integrated setting appropriate to the needs of qualified individuals with disabilities.” The Supreme Court in their 1999 Olmstead decision stated that the ADA protected people from a segregated setting, such as a nursing home.

However, the U.S. Department of Justice has provided guidance that explains states can violate the ADA and Olmstead decision because of budget cuts, but public entities have “a duty to take all reasonable steps to avoid placing individuals at risk of institutionalization.”

The lawsuit argues Oklahoma has not taken reasonable steps to avoid the institutionalization risk, and Oklahoma still has options before lawmakers cut these vital services. The legislature could make cuts to other non-vital services that would not have blood on their hands. Slashing a program that saves money in the long run does not make sense when there is a budget deficit.

In the meantime, Anderson and other activists from the Oklahoma chapter of ADAPT will be engaging with lawmakers and protesting their rights to live in the community. He encourages others to get involved and call state legislatures to educate them on the importance of the waiver programs. “I'd like to think,” he said, “it would rally more persons with disabilities to speak up and fight for their lives and rights.”

Rebecca Anger is a disabled social activist and an aspiring attorney in Chicago, focusing on health and civil rights law. When she is not fighting injustice, she likes to cook and create new recipes and spend time with her husband.