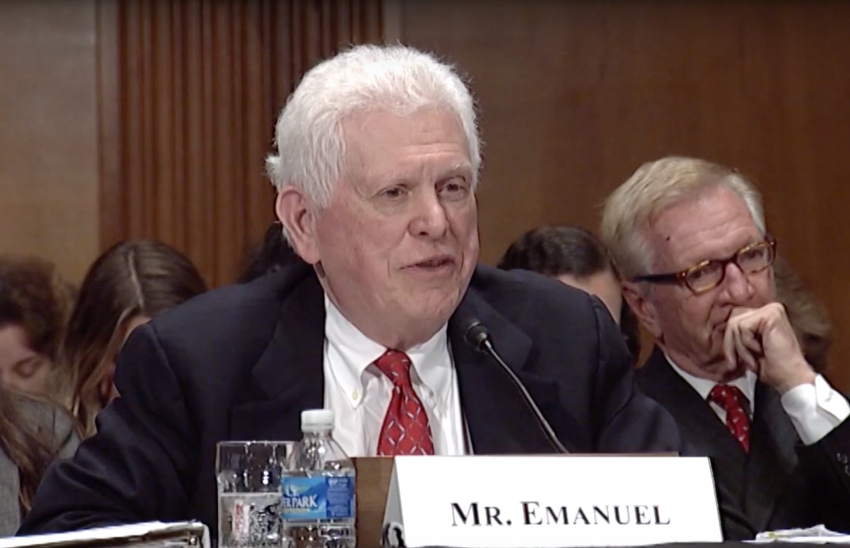 An anti-union policy decision from President Donald Trump’s National Labor Relations Board (NLRB) appointees appears to be tainted by a violation of ethics standards, and Sen. Elizabeth Warren (D-Mass.) is joining unions in demanding answers.

The Trump policy decision came on December 14 when the NLRB reversed an Obama-era ruling in the Browning-Ferris case—a pro-worker decision from 2015 that has been loudly decried by business lobbyists and conservative Republicans. The case turned on the issue of how the NLRB would define the term “joint employer” in union organizing cases—and was broadly viewed as a blow to McDonald’s and other fast food companies that exploit the franchise business model as a tool to help defeat unions. Last month, the five-member NLRB voted 3-2 in the Hy-Brand Industrial Contractors case to reverse Browning-Ferris, with recent Trump appointee William J. Emanuel providing the margin of victory for the anti-union forces.

Emanuel now stands accused by Warren and others of violating ethical standards by voting on the case even though he appears to have a conflict of interest. The conflict is said to arise from Emanuel’s former status as part owner (or “shareholder”) of the labor law firm Littler Mendelson, a business that specializes in representing employers against their own workers. The firm represented a party in Browning-Ferris, so standard government ethics rules indicate Emanuel should have recused himself from voting, according to critics.

“It looks really bad,” says Susan Garea, a California attorney representing Teamsters Local 350. Emanuel’s violation of ethics rules taints the NLRB vote, she tells In These Times, so the decision in Hy-Brand Industrial should be voided, and the validity of Browning-Ferris evaluated in an atmosphere free of conflicts of interest. Garea detailed her charges in a Jan. 4 court filing in the U.S. Court of Appeals for the District of Columbia Circuit. “It’s clear Emanuel should not participate,” in any vote on Browning-Ferris, she says

The Teamsters have been fighting the case for years. In 2013, Local 350 tried to organize workers at a recycling center in Milpitas, Calif., that was owned and operated by Browning-Ferris. But the union found itself blocked by a legal strategy that asserted the workers were actually employees of an outside staffing agency, Garea explains. The union fought the case before the NLRB, prevailed with the Board’s 2015 pro-union decision, and has been working ever since to fend off legal attempts to overturn the ruling. Garea, of the law firm Beeson, Tayer & Bodine, proclaims the case is far from over and the union is intent on blocking Emanuel’s improper action.

Warren entered the picture when Trump nominated Emanuel for the NLRB in mid 2017. She opposed him from the start, arguing that a lawyer who has represented only bosses in a 40-year-plus legal career was a bad choice for the NLRB, which is supposed to be a fair arbiter of labor disputes. She demanded a commitment from Emanuel to recuse himself from NLRB cases involving a long list of former clients (which he agreed to do) and voted against him in the final confirmation on the Senate floor.

“Emanuel is the opposite of what Senator Warren would like to see in an NLRB member. His conflicts of interest are a mile long, and he spent decades fighting against workers’ efforts to join together and stand up for themselves,” Warren’s Deputy Press Secretary Saloni Sharma tells In These Times.

The Senate floor vote on Emanuel reflected the deep party-line divide over Trump’s nominations to the NLRB. All the Democratic Party senators present voted against Emanuel, and all the Republicans voted for him. AFL-CIO chief lobbyist Bill Samuel tells In These Times that Trump’s appointments to government labor posts have been strongly anti-union, but Emanuel is one of the most extreme. “We didn’t make a fight about Emanuel. We just didn’t have the votes,” he says. “But we are very much behind Sen. Warren in her efforts to hold them [the NLRB members] accountable.”

In a letter dated Dec. 21, Warren posed questions to Emanuel raising concerns about potential misconduct in the Hy-Brand vote. "Given that your former partners at Littler Mendelson P.C. represented a party in [Browning-Ferris] before the board, did you recuse yourself from the board’s decision to move to remand the [Browning-Ferris] case from the U.S. Court of Appeals for the D.C. Circuit back to the board? If not, why not?" she writes. The letter, also signed by several other top Congressional Democrats, requests that Emanuel commit to additional recusals from pending NLRB cases in the future.

An unsigned email message stated that Emanuel “respectfully declines” a telephone interview to discuss the Warren allegations. Messages left directly with Emanuel were not returned.

Sen. Warren and other congressional Democrats are awaiting a formal response to the questions before deciding on the next step against Emanuel. Meanwhile, the White House is expected to announce it is nominating Washington, D.C., management-side attorney John Ring to fill an open seat on the five-member NLRB, as former Chairman Philip Miscimarra’s term on the Board expired just days after the Hy-Brand decision.