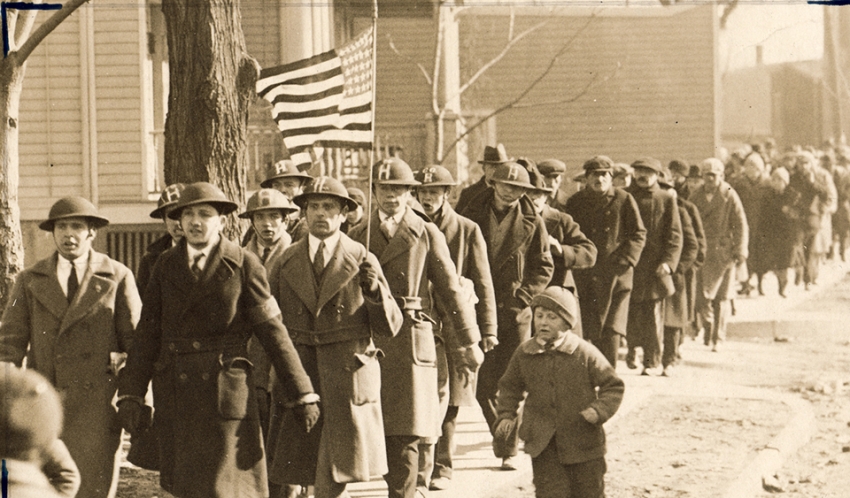 The 1926 Passaic Textile Strike began on January 25th, 1926 and lasted through March 1st, 1927. The work stoppage involved more than 15,000 wool and silk workers in and around Passaic, New Jersey who mobilized in response to a 10 percent cut in their already meager wages. The Passaic Textile Strike is notable for the use of force against the demonstrators, the debates over free speech, the role of intellectuals and intellectualism, and for being the Communist Party’s first attempt to organize a large-scale demonstration encompassing the region’s textile industry.

Before the Passaic Textile Strike, the United Textile Workers (UTW), an affiliate of the American Federation of Labor (AFL), attempted to organize the textile workers; however, like in the Paterson Silk Strike of 1913, the mill managers purposely hired immigrants from many different countries to prevent the workers from easily communicating and organizing. Thus, Albert Weisbord, an active member of the International Workers of the World (IWW) and communist and socialist parties, left New England for Passaic to organize the textile workers. He created and led the United Front Committee (UFC), a communist-affiliated subgroup of the Trade Union Educational League (TUEL). Within two months of his arrival, Weisbord and the UFC enrolled approximately 1,000 workers to unionize the region’s textile workers. UFC members articulated the following goals: “(1) abolition of the wage cut and a 10 percent increase in wages over the old scale; (2) reimbursement of the money taken from the workers by the wage cuts since the time the cuts were imposed; (3) time-and-a-half for overtime; (4) a forty-four-hour week; (5) decent sanitary working conditions; (6) no discrimination against union members, and (7) recognition of the union.”

When UFC members asked only for an abolition of the wage cut, overtime wages, and non-discrimination of union members from Colonel F. H. Johnson, the manager of the Botany Worsted Mills, he fired all 45 UFC members on the spot. Within an hour, 4,000 Botany Mills workers had formed a picket line. By the end of the week, workers from Geral Mill, the Passaic Worsted Spinning Mill, and the Garfield Worsted Mill had joined the strike, totaling approximately 8,000 strikers.

On February 9, 1926, striking textile workers, their families, and their supporters attempted to cross the bridge from Passaic into Clifton, NJ to shut down the Clifton Forstmann & Huffman Mill. Police brutally attacked the picketers and forced them to turn around; however, the following day, the strikers rallied further support and were able to break through the police lines. Two months into the strike, 15,000 strikers had been assembled. These individuals walked daily in picket lines at their targeted mills, and a striker’s committee, comprised of workers from each mill, met each morning at 9:00. Strikers garnered financial support from across the nation by creating and distributing a seven-reel silent film about their efforts, called The Passaic Textile Strike.

The Passaic City Council attempted to outlaw picketing and public meetings by introducing a Riot Act on February 25th, 1926. Regardless, on March 1, 2,000 strikers gathered in Passaic. The following day, the police attacked the assembled group with clubs, tear gas, and high-pressure cold water from the fire department. This continued into the following day. By March 3, picketers, their families, and the media came prepared with steel helmets, and the police continued their attacks and arrests. On April 10, 5,000 child workers and school children marched in support of the strike. They, too, were attacked by the police.

By the end of April, the American Civil Liberties Union (ACLU) had intervened, objecting to the enforcement of the Riot Act and martial law. Despite this, on July 26, Passaic police chief, Richard Zober, ordered the police to attack the strikers with clubs once again. As a result, the Associated Societies and Churches of Passaic, comprised of Russian, Polish, Slovakian, and Hungarian immigrants, gathered to mediate a settlement between mill management and mill workers, and they ultimately sided with the strikers, calling the companies “Kaiser-like.”

Albert Weisbord and his communist counterparts came under scrutiny, culminating in the AFL’s insistence that communist leadership of the UTW be disbanded. In August 1926, the change in leadership occurred and the new, more conservative UTW Local 1603 took over. However, the mill companies still refused to negotiate. Undeterred, the strikers established a “Committee of Five,” consisting of local residents and clergymen. On November 12, 1926, the Passaic Worsted Company signed an agreement to the following terms: “(1) recognition of the union; (2) the right of the workers to bargain collectively; (3) no discrimination in rehiring; (4) arbitration for further disputes, and (5) no outside help to be engaged until all the strikers were reemployed.” Six hundred workers at the Worsted Mill met, voted, and accepted the terms. The Botany Mills, Garfield Worsted Mill, and the Dundee Textile Company followed suit. Other mills refused to sign contracts with their workers, only offering to “endeavor to re-employ as many of our former workers as we possibly can, without demonstration." By March 1st, all of the workers had voted to end their strike.

After the strike, the mill companies broke their agreements with their workers, firing them only to rehire them at lower wages. The UTW no longer had enough support to object; within two years of the strike ending, UTW membership dwindled to less than 100 and completely disappeared shortly thereafter.

Catherine Paul is currently a Master of Social Work Candidate at Virginia Commonwealth University (VCU), and she expects to graduate with her M.S.W. in May 2018.

More by Catherine A. Paul