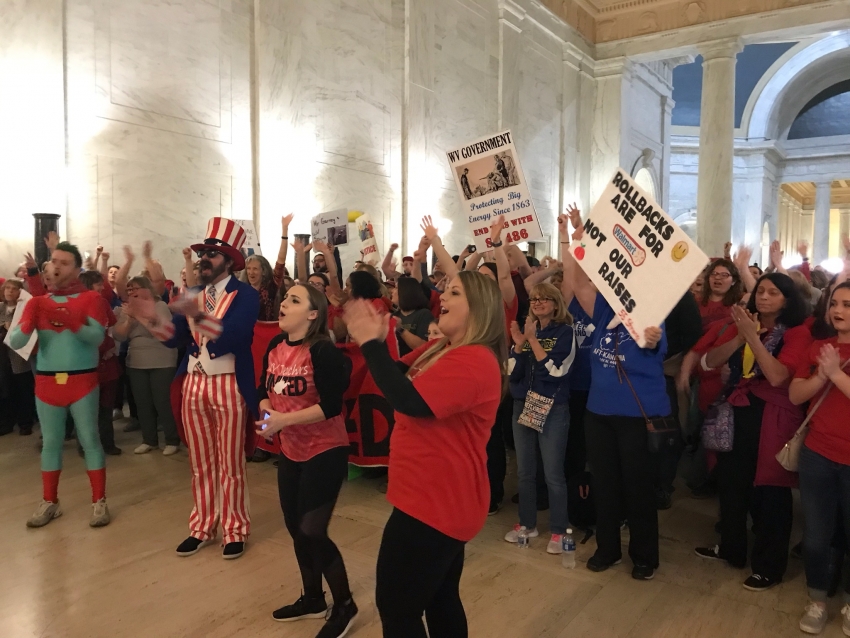 "That’s the only way forward for me, is to take from the rich and give to the poor and that’s what this is all about.” (Yawana Wolfe)

The strike, which began on February 22 and continued for nine days across the state, left nearly 277,000 children out of classrooms with their parents scrambling for babysitters. Meanwhile, more than 20,000 red-shirted teachers took to picket lines across all 55 counties and created a massive presence in Charleston, the state capitol. Many teachers wore red bandannas in commemoration of the Battle of Blair Mountain—the largest labor uprising in U.S. history which took place in West Virginia in 1921.

On Monday, the capitol was briefly shut down due to overcrowding by striking teachers and supporters. By 11 a.m., the capitol, which was built to accommodate 3,700, had amassed over 5,000, with the line snaking into the building stretching for at least half a mile.

Teachers were on strike demanding a pay raise and a fix for the Public Employees Insurance Agency (PEIA) which provides healthcare coverage for state workers. Rising premiums and benefit cuts in recent years have led to frustration for many public employees, and West Virginia teachers rank among the lowest paid in the nation.

During the talks with Senate leadership and Gov. Justice, strikers rallied outside the Senate and House chambers chanting, “55 United” and “You work for us, we’ll work for you!”

After days of negotiations, with some strikers traveling hours to get to the capitol each day, many teachers were ecstatic when the vote of 34-0 in the Senate was announced. Chants of “55 United” gave way to hand holding and the singing of John Denver’s “Take Me Home Country Roads.” Tears were shed and a feeling of pride and accomplishment settled over the crowd.

Brandon Tinney, a union leader with the American Federation of Teachers said he was happy with the progress the strikers made. “We have been 48th in pay for the past several years so any raise in pay is helpful,” he said. “Five percent won’t get us where we need but it’s a great start this year so we’re looking at building that moving forward.”

Tinney also spoke about the natural gas severance tax bill that state Sen. Richard Ojeda (D) advocated during the strike as a means of providing revenue for the state. “We tax at a very low rate in West Virginia so we just want that to be competitive so that our state will have money as well.” he said. “We let coal leave this state for next to nothing for almost a hundred years and we don’t want to do that with oil and gas.”

Tinney, who was a teacher before becoming a union leader, said: “When you become a teacher you want a couple of things: benefits and respect. And our teachers in this state feel like they haven’t had respect for a while and now this cut in benefits was the last straw. So, if we get our benefits sowed up and get our respect back, we know that pay was always going to be low, but we need those two main things to be in this profession.”

Don Spence, the Mingo County school superintendent, said the pay raise is well deserved. “For so long the teachers have came up here and not got anything. It’s time that [state legislators] put education first and realize we have teacher shortages in our counties. We can’t fill math positions and with the salary increase, we will become more competitive with the bordering states. That’s a big issue for my county. We’re a bordering county and you know, with all the events that have happened this whole thing has taken on a life of its own. And every day the target changes and the emotions change but in the end it was simply about the deal. It was about what Gov. Justice promised us and the people just bowed their back up and they were determined that this is what it should be.

“Today is the culmination of a living history lesson we are all in today. Years from now, people will still be talking about this and so I’m excited for the state employees and for everyone that got a raise—the teachers and the state police. It’s a celebratory time and it’s nice to get back to normal.”

Spence also spoke about the lack of a clear cut solution to fix PEIA. “This is not just a money issue,” he said. “You have to be able to pick the right vendor, you have to be able to figure out how the money flows. There are a lot of sticky points with PEIA and to be honest with you, the notion that we just need it fixed, that doesn’t just happen overnight. The governor assigned a task force. It meets next week so I think that it’s in progress and I believe that something really good will come out of that, too.”

Kim Hundley, an English and theater teacher at South Charleston High School in Kanawha County, said she would like more information about the PEIA task force. “Someone told me that a list was released but I haven’t seen who’s on it. It makes me uncomfortable because what if in 16 months the task force is like ‘hey we didn’t come up with a solution. Sorry guys?’”

Tish Martin, an art teacher at Milton Elementary school in Cabell County said: “They’re tripling our insurance. A lot of people don’t realize that in April and May they take insurance out of our checks to cover the summer months. That would leave some of us with maybe two to three hundred dollars per month. It’s not about the money. This victory of a 5 percent raise, I don’t care about that. I just want the insurance fixed.”

Tricia Murphy, a teacher at Sissonville High School in Kanawha County, said the loss of her sister to cancer last year made this fight an emotional issue for her.

“My sister died a year ago and she was a supervisor at the West Virginia Department of Health and Human Resources and only earned $31,000 a year. And so the fight to include the public employees was a very personal thing for me, knowing that she spent so much of her life at a job where she was getting so little. And she’s not the only one. There are many out there who are earning way less than what she earned. It’s a problem and I hope that this helps them.”

During Tuesday’s press conference where Gov. Justice signed the pay raise bill, John Ryman, a former union member from Oakland, Calif. who came to West Virginia to show his support for the striking public employees, stood up and told Gov. Justice that: “We’ve had 25 years of taking from the poor and the working class people and giving to the rich. To me, that’s what this strike is all about. Yes, it’s about education, but it’s also about reversing that and taking from the rich to give to us, the poor. That’s the only way forward for me, is to take from the rich and give to the poor and that’s what this is all about.”

Kim Swindell, a teacher at Poca Middle School in Putnam County said: “We’ve been here for nine days but long before that it started to kind of rumble. We are very hopeful and I think that we made our voices heard and the legislators and the senators heard what we have to say. I don’t think they took us very seriously in the beginning, but we’ve literally been going to their offices three to four times in a week’s time to tell them how we feel. I think they finally realized that we truly are not backing down.”

Yawana Wolfe is a legal journalist who has published over seventy articles for Courthouse News Service. A former military journalist, she now resides in her home state of West Virginia with her partner and their seven children.