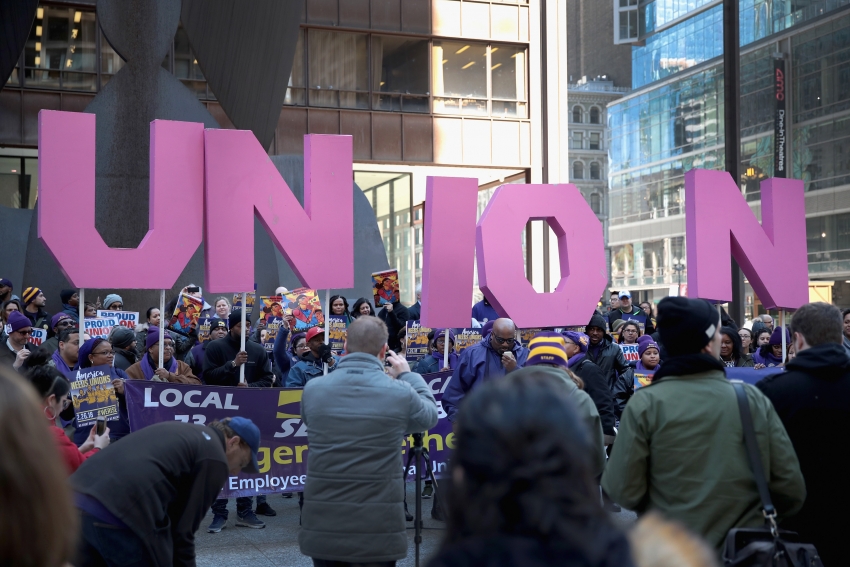 The guillotine has finally fallen. After years of uncertainty, the Supreme Court has invalidated fair share fee arrangements in thousands of public sector collective bargaining agreements across the country through its 5-4 decision in Janus v. AFSCME, Council 31. The result is clear: public-sector workers can choose not to share in the costs of their unions’ collective bargaining. Janus thus jeopardizes the financial vitality of public sector unions. And it does so just as a wave of teacher walkouts in right-to-work states reveals the political risks of policies that give public sector workers little voice in their wages and conditions of employment.

What’s next? It is time for lawmakers in progressive, pro-labor states to get to work. (Note that these are essentially the only states affected by Janus, since red states have already overwhelmingly forbidden fair share fees as a matter of legislative policy.) As I explain in "How To Undo Janus: A User-Friendly Guide", lawmakers have the power to reduce Janus to a mere footnote in the long arc of history for organized labor. To see how, consider the following thought exercise.

Imagine you are a state legislator in a progressive state in the 1950s, before public sector unions are even recognized. You believe that public workers will be more satisfied and productive, and that the quality of public services will improve, if workers have a meaningful voice in their wages and terms and conditions of employment. You believe that the best way to empower this voice is to require public employers to bargain on a range of issues with unions that are accountable to their members and that fairly represent all workers. And you recognize that unions must have adequate financial resources in order to advocate effectively.

So here is the million-dollar question: How should the government ensure the unions’ financial security?

One option would be for public employers to pay an extra sum of money to their workers and then to force all workers to send that money on to the union. Any worker who refuses would be fired. The rationale is that because the union will be legally obligated to represent all workers fairly, all workers must pay their “fair share” of the union’s bargaining costs. This approach would achieve the basic goal of union financial security, since most workers will naturally prefer to keep their job than lose it over a modest compulsory union payment.

Yet the fair share approach has a hidden downside. By channeling the unions’ money through worker paychecks, the public employer imposes an extra tax on workers. Workers are taxed, after all, on their income. But the portion of worker paychecks that must be turned over to the union would be more imaginary income than real. Workers would pay taxes on that income without ever seeing it in their bank accounts. Depending on the worker’s salary and circumstances, the net loss from this arrangement would be upwards of $200 to $300 each year.

You quickly come up with a second option. Rather than paying workers an extra sum of money and forcing them to turn it over to the union, public employers can just send the same sum straight to the union, reimbursing unions for their bargaining costs directly. Removing the workers from the equation would eliminate the extra tax burden created by the fair share approach. Under direct reimbursement, workers would have more money at the end of the day, the union would enjoy the same financial resources, and state and local budgets would be unaffected. What‘s more, direct reimbursement would be more respectful of the objections of a worker like Mark Janus who does not want to pay fair share fees: With the reimbursement approach, no worker must send money from their paycheck to an organization to which they are opposed.

Which option would you choose as a 1950s lawmaker: the fair share approach or the direct reimbursement approach?

To the extent there is a principled explanation, it is an argument based on union independence. The direct reimbursement approach, the argument goes, would make unions dependent upon public employers—the very entity against whom they are supposed to bargain—for their finances. As a result, unions might feel pressured to subvert worker interests in order to maximize their own financial wellbeing.

This is an important concern. Yet it is one implicated by fair share fees, too. In the immortal words of Jack Larkin, a union representative who testified during the 1935 debates over the NLRA, any argument that fair share fees are more conducive to union independence than direct reimbursement is “absurd” because “[t]he ultimate source of the money paid in by the members of a labor organization is from the employer and I cannot see what difference it makes whether the [employer] turns over a lump sum each year, according to a fixed arrangement, or whether the men pay a check-off.”

In any case, union independence can easily be preserved under a reimbursement system through wise legislative drafting. The key is that public employers not be given the unilateral power to reduce reimbursement payments as a way of coercing unions into agreeing to wage or benefit cuts. Instead, public employers should be required to reimburse unions for all bargaining-related costs. Unions would then keep track of their expenditures and submit them for reimbursement periodically. If an employer believes that certain expenditures are not sufficiently related to bargaining to merit reimbursement (for example, perhaps an expenditure is for some political campaign contribution), the employer could challenge those expenses before an independent body of labor law experts. All other expenses would need to be paid promptly.

If this kind of a system seems complicated, it shouldn’t. It is essentially the same process that unions followed before Janus. Under the fair share model, unions calculated their bargaining-related budgets and submitted them for payment, with challenges to individual union expenses often adjudicated by independent bodies known as state Public Employment Relations Boards (PERBs). To be sure, public employers would pay the union directly (rather than through mandatory deductions from worker paychecks) under the reimbursement system, and employers would have the right to challenge whether certain union expenses are germane to collective bargaining (rather than objecting workers).

But two important realities will limit public employers’ ability and incentive to use such challenges as a threat to union budgets. First, there is already a significant body of judicial and administrative law governing whether certain kinds of union expenditures are germane to bargaining (and thus reimbursable). So this long-settled precedent will prevent public employers from challenging the vast majority of routine union expenditures on day-to-day bargaining, contract administration and grievances. Second, litigation is costly. It is unlikely to be worthwhile for public employers to expend tens or even hundreds of thousands of dollars quibbling with unions over the reimbursability of union expenses, the vast majority of which are unquestionably permissible under decades-old precedent.

For those interested in a deeper dive into these and other legislative design and implementation issues, I explore them at length in "Life After Janus", which includes a model direct reimbursement bill for state lawmakers to consider.

Had they designed public sector labor law from scratch, state lawmakers might have been wiser to choose a direct reimbursement system rather than a fair share system to protect union financial security. But even if you think it’s a close call, that is exactly the point: Reimbursement serves essentially every goal that fair share fees serve, with the added bonus of increasing wages for a significant portion of the middle class. So now that Janus has taken the fair share option off the table, the correct answer for progressive lawmakers is obvious. Here’s hoping they get it right.

Aaron Tang is Acting-Professor of Law at the University of California-Davis School of Law. He is a graduate of Yale College and Stanford Law School and is a former law clerk to Associate U.S. Supreme Court Justice Sonia Sotomayor. He is the author of How to Undo Janus: A User Friendly Guide, a short white paper that includes model legislation for state lawmakers. Follow him at @AaronTangLaw.