When Gig Economy and Fast Food Workers Band Together 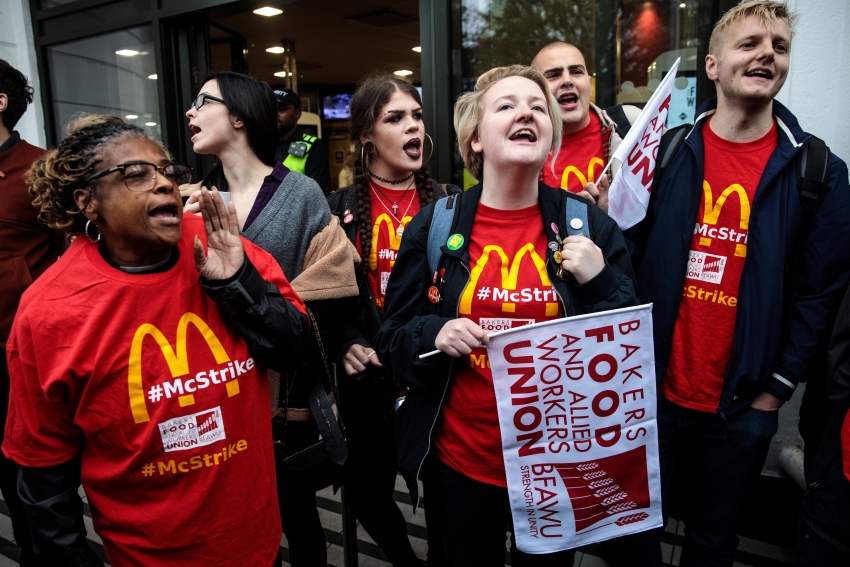 Protesters demonstrate outside a McDonald's restaurant in Brixton in support of striking fast food workers on October 4, 2018 in London, England. (Photo by Jack Taylor/Getty Images)

October’s “Fast Food Shutdown” will be remembered as a pivotal moment in the campaign to organize hospitality and gig economy workers in the United Kindom. Workers from McDonald’s, TGI Friday’s, JD Wetherspoon, Uber Eats and Deliveroo walked out on their jobs to demand better wages, full employment rights and union recognition. This unprecedented coordinated national strike suggests a new industrial alliance is in the making where many least expected it.

The night before the strike, every Labour member of parliament received a memo from party leadership compelling them, as a matter of responsibility, to join local pickets. The workers who gathered in west London’s Leicester Square were joined by shadow chancellor John McDonnell, who promised that a Labour government would meet their demands.

"The message to every exploitative employer in this country is that we’re coming for you,” McDonnell said. “We’re not tolerating low pay, insecurity or lack of respect. We will mobilize as one movement.”

Precarious workers are emerging as one of the most formidable forces in the grassroots movement behind Jeremy Corbyn, whose unexpected rise to party leader has revitalized Labour’s activist base. A new political consensus is being forged and the Labour Party’s willingness to stake out a place on the front lines of workers’ struggles has imbued a young movement of food industry workers with a sense of hope and optimism in deeply uncertain times. And with the possibility of a no-deal Brexit on the horizon, the prospect of the opposition climbing its way into power seems less of a wide-eyed political fantasy by the day.

The momentum behind the fast food shutdown was built on the timely convergence of two struggles. Two weeks before a joint strike backed by Unite, the Bakers, Food and Allied Workers’ Union (BFAWU), and War on Want, Uber Eat’s couriers brought traffic to a halt outside the company’s UK headquarters, to protest changes in the company’s wage structure that amount to a 40 percent pay cut. Uber Eats and Deliveroo couriers, who are supported by the Industrial Workers of the World and the Independent Worker's Union of Great Britain, decided to join the initiative in what was a historic display of solidarity between food service and gig economy workers.

“We've known that platform workers are a potentially militant workforce. However, the potential for them to lead an alliance with fast food workers was always a distant possibility,” says Callum Cant, a former Deliveroo rider and author of the forthcoming book, Working for Deliveroo. According to Cant, the vitality of this movement is largely thanks to the fact that Thatcher-era trade union laws aren't applicable to self-employed gig economy workers, leaving a wider range of tactics at their disposal.

“Solidarity strikes, secondary picketing and wildcat action are all staples of food platform worker mobilization. Their spontaneity and flexibility has allowed this alliance to become a reality,” he tells In These Times.

Nearly a decade of Tory austerity has taken a devastating toll on the British public. Increases in life expectancy have stalled, the number of children living in poverty has risen sharply and workers are suffering through the harshest pay squeeze since the end of the Napoleonic Wars. Many of the striking workers are simply fed up with their wealthy bosses who reward themselves with record salaries and lavish bonuses while they remain trapped in a cycle of debt and financial uncertainty with no end in sight.

“We’re tired of being exploited and working extremely hard without having much to show for it at the end of the day,” says Chris Heppell, a 29-year-old chef at a Wetherspoons pub in Brighton.

Chris tells In These Times that he and his colleagues often felt powerless, explaining, “We knew something had to change but we didn’t really know we can do anything about it."

Unions face an uphill battle in the food service industry, where only 2.9 percent of the workforce is unionized. But after Chris and his colleagues witnessed the first ever McDonald’s strike in the UK last fall, they decided to join their campaign for a £10 an hour living wage. On the night of the nationwide action staff at two Wetherspoons pubs in Brighton went on strike for the first time in the company’s history.

“To say that workers in this industry can’t organize is a lie. These workers are proof of that lie,” says Ian Hodson, national president of the BFAWU, one of Britain's oldest unions.

The growing appetite for online food delivery services is fueling what UBS analysts predict will blossom into a $365 billion global industry by 2030. Yet the workers that the leading lights of platform capitalism rely on struggle to make ends meet. Deliveroo’s operation of “dark kitchens” where chefs dish out name brand food from cramped windowless metal boxes, does little to silence critics like the Archbishop of Canterbury, who recently described the gig economy as "the reincarnation of an ancient evil."

The Uber Eat’s strike is just the latest in a wave of mass collective action by food platform workers across the UK and Europe sparked by the 2016 London Deliveroo strike. Workers are demanding £5 a drop, £1 per mile travelled and no victimization of striking couriers.

Meanwhile, Uber is said to be in early talks to acquire London-based startup Deliveroo, its food delivery arm’s main rival, which was recently valued at £2 billion. If recent events are any indication of a changing mood amongst gig economy workers, Uber’s potential monopoly over food delivery platforms may have the unintended consequence of consolidating resistance to its exploitative business model.

This new fast food alliance knows its struggle is transnational and has taken inspiration from the Fight For $15. Should a Labour government come to power these workers are confident that their voices will be at the center of a socialist project to transform Britain.

In These Times asked Chris if he had a message for bosses like Wetherspoons chairman Tim Martin, who is worth £448 million. He replied, “Listen to your workers.”