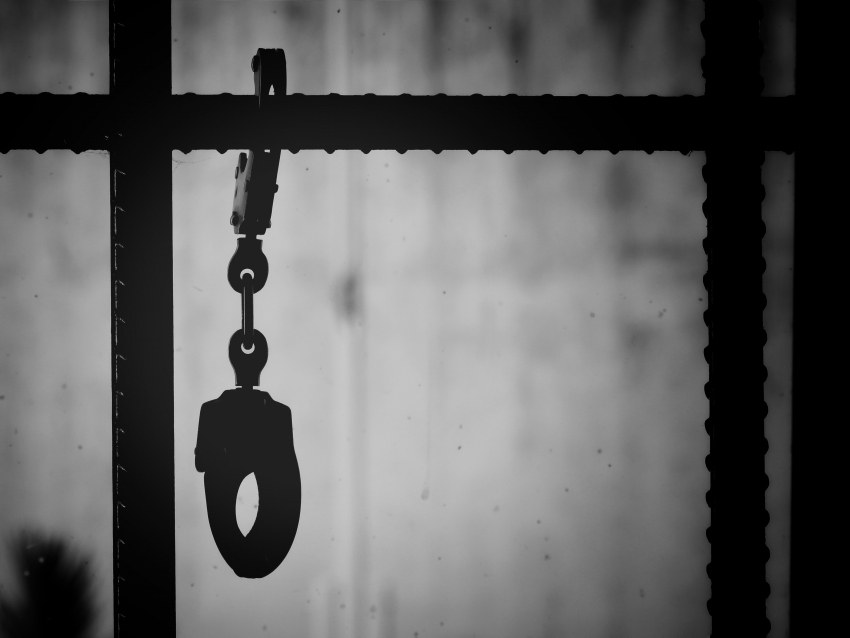 It should have been a straightforward case: In 2015, Kendall Charles Alexander, Sr., an African-American man who was incarcerated in New Jersey, filed a lawsuit, Alexander v. Ortiz, alleging that his federal workplace supervisor violated his constitutional rights by discriminating against him on the basis of his race. Yet, in March 2018, New Jersey District Court Judge Jerome B. Simandle found Alexander to be ineligible for equal protection under the Fifth Amendment’s due process clause.

That’s because Alexander was a worker at a textile factory run by UNICOR, the U.S. government corporation that administers an “inmate labor program” in federal prisons. While he was incarcerated at Federal Correctional Institution (FCI), Fort Dix,  a low-security facility just outside of Trenton, New Jersey, Alexander would learn that people like him, working for anything from 23 cents to $1.15 an hour, are not entitled to the same protections as people on the outside. On paper, Simandle dismissed the case on the basis that it conflicted with a Supreme Court precedent. But the judge’s reasoning boiled down to the argument that prisoners are not “employees,” and therefore are not entitled to key protections from discrimination and retaliation.

Alexander—still incarcerated, now at a North Carolina facility—fixed sewing machines at the Fort Dix factory for 46 cents per hour in 2013. He writes to In These Times, “As a very skilled mechanic, my day-to-day work was satisfying.”

In an amended complaint, updated in August 2016, Alexander alleged that the factory manager at the time, Robert Ortiz, was motivated by racial bias when he kept Alexander’s wages at the same rate—46 cents an hour—for seven months, from August 2013 to March 2014. Alexander had been hired because of his advanced skills and previous UNICOR work experience—which also meant that his “pay grade should have been accelerated every thirty (30) days,” writes his pro bono lawyer, Sharon King, in the amended complaint. Instead, Ortiz allegedly gave promotions to white and Hispanic workers over Alexander, the complaint charges.

After his pay was reduced due to an unauthorized absence, Alexander decided to quit his position in October 2014.

Alexander’s amended complaint requested monetary relief that accounted for back pay, punitive damages and mental and emotional distress. The complaint states that Alexander “hopes and prays that this Honorable court grants the relief he seeks for the Defendant's violation of Plaintiff's Constitutional Rights.”

In a brief filed by his lawyer, Ortiz claims Alexander was promoted by one pay grade over the span of 15 months, a rate that “was fairly standard within his group.” He adds that Alexander “was not receiving overtime opportunities even before he filed the first of his several administrative grievances.” Ortiz rejects the charge that Alexander’s lack of overtime hours constituted discrimination and claims it was a “continuation of the circumstances that had already been in place.”

Alexander was never able to make his case in court–and challenge Ortiz’s claims. The judge would not let the case proceed to a trial, determining Alexander was a prisoner and therefore not entitled to work in a non-discriminatory workplace.

Judge Simandle’s ruling was partially informed by the The Prison Litigation Reform Act, a law that makes it nearly impossible to sue prisons due to its requirement that incarcerated people “exhaust administrative remedies.” Alexander notes such administrative paths are not viable. “Any time that you begin the administrative remedy process, you can expect some form of road block,” Alexander writes, “and a lot of people just say, ‘Forget it.’ I'm not one of those people.”

The Court’s adjudication of Alexander was guided by a key 1971 Supreme Court ruling that has provided one of the few means to hold federal employees, like Ortiz, accountable for constitutional violations. Bivens v. Six Unknown Named Agents found that a plaintiff experiencing an unlawful search and seizure by federal officers has a right to damages. In the years following the ruling, the plaintiffs who sought to bring a claim under Bivens, like Alexander, were required to prove that a constitutionally protected right—originally pertaining to the Fourth Amendment—was violated by a federal employee in order to receive damages

Bivens claims have been successfully applied in two other situations: one regarding violations of the Fifth Amendment’s protection against gender discrimination, and another concerning the Eighth Amendment’s restriction on cruel and unusual punishment. Yet, Judge Simandle found that Alexander’s case—centered on the equal protection guaranteed by the Fifth Amendment—was not one of them.

That’s because, in the middle of the Alexander litigation, the Supreme Court decided in the 2017 case, Ziglar v. Abbasi, that judges should “hesitate” when applying Bivens to contexts that are “different in a meaningful way” from the past three ones if there are “special factors” for consideration.

The factual evidence of the Alexander case was not a perfect match with the approved Bivens contexts. The 1980 Supreme Court case, Carlson v. Green, approved Eighth Amendment violations for Bivens claims. The complainant was a federally incarcerated man, like Alexander. But for Simandle, Carlson was not applicable. The 1980 case concerned the right to medical care and freedom from cruel and unusual punishment—not a prison labor program and equal protection, as in the case of Alexander.

But Judge Simandle still considered Alexander to be “meaningfully different” from the 1979 Fifth Circuit Court of Appeals case that ended up awarding damages to a female secretary who was terminated by a congressman on the basis of gender. It came down to one distinction between the situations of Davis and Alexander. A secretary working for a congressman is classified as an employee—but an incarcerated person laboring for UNICOR is not.

“A prisoner who works for UNICOR is not considered an employee because UNICOR sees them as ‘being rehabilitated,’” says King, referring to federal regulation code that stipulates UNICOR will “allow inmates the opportunity to acquire the knowledge, skills, and work habits which will be useful when released from the institution.”

The denial of UNICOR workers’ status as employees has been asserted in past legal cases. In 1997, the federal court of appeals for the Ninth Circuit ruled that, since prison workers are not “employees,” they are not entitled to protection from retaliation.

According to the final opinion given, as an incarcerated person with a UNICOR work assignment, and not simply an “employee,” Alexander is excluded from many extant labor laws, including: Title VII of the Civil Rights Act of 1964, the Fair Labor Standards Act, the Equal Pay Act, the National Labor Relations Act and the Federal Tort Claims Act.

Simandle acknowledges that Alexander lacks “an alternative remedy for damages,” which is required, per the Ziglar ruling, to deny a Bivens claim. But Simandle concludes that the judiciary cannot decide how the UNICOR work environment ought to be regulated. Instead, he assigns the responsibility to the legislative and executive branches.

“Had Congress intended to include a monetary remedy against federal officers or employees for those sorts of claims in the UNICOR implementing statutes, it would have so stated,” writes Simandle. For Simandle, the extension of Bivens to the prison workplace “should be left to those branches [like Congress] to determine whether an action for damages for claims of racial discrimination and retaliation exists.”

Paul Wright, a formerly-incarcerated writer and activist who is the editor of Prison Legal News and the founder of the Human Rights Defense Center, told In These Times he disagrees with Simandle on both fronts.

“That is the key thing: If the judge wanted to grant relief, at least for the damages ... he had a vehicle to do so, but he chose not to,” says Wright. “And that’s the problem.”

King is disappointed with the outcome of the case. “It’s unfortunate,” she says. “I think it says, moving forward, that federal officials within a prison context can essentially discriminate without giving an account.”

District courts, like the one adjudicating Alexander, don’t have binding precedent, so the broader consequences of Judge Simandle’s opinion remain indeterminate. But the adjudication of the case clarifies lack of recourse for incarcerated people who already work practically for free. King says that the pay Alexander and other prisoners were paid was so low she considers it to be “almost slave wages.”

“After leaving UNICOR,” Alexander writes, “I became less self-sufficient and had to resort to family financial assistance or face loss of privileges.”

Wright notes, “These days, people underestimate the amount of money that it takes to be a poor person in prison.” According to a report by the Prison Policy Initiative, average prisoners in Illinois, Washington, and Massachusetts spent $947 per year on commissary expenses, which far exceeds the typical amount a person earns per year working a prison job.

Ultimately, the outcome of the case raises troubling questions about the status of incarcerated people. “If we are not employees, then what are we?” Alexander wrote in the wake of the ruling.

He answered his own question: “Slaves.”

Sessi Kuwabara Blanchard is a freelance journalist reporting on carceral institutions, politics and cultures. She is also a staff writer at Filter, a new online publication covering drug policy and harm reduction. Follow her on Twitter @SessiBlanchard.