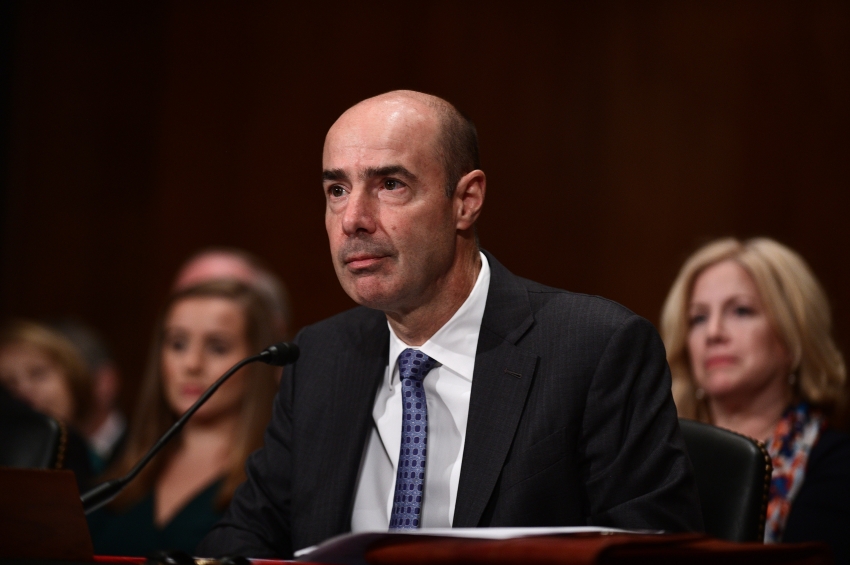 Working women and men need and deserve a Secretary of Labor—somebody who will look out for their interests, protect them from unscrupulous employers, set strong health and safety standards, and safeguard their retirement security.

Unfortunately, corporate lawyer Eugene Scalia, the man named by President Trump to be the next Secretary of Labor, is not that person.

Scalia, a graduate of the University of Chicago Law School, is a partner at the Washington, D.C.-based law firm Gibson, Dunn & Crutcher, where he specializes in labor and employment law and administrative law. He is an active participant in the activities of the Federalist Society—a right-wing legal group. Scalia was nominated in 2001 by President George W. Bush to be Solicitor of Labor, but his nomination was blocked because of opposition over his extreme views against worker health and safety protections. Bush circumvented the Senate and installed Scalia as Solicitor through a recess appointment. Scalia returned to his law firm at the beginning of 2003.

Scalia has built his career representing corporations, financial institutions, and other business organizations—and fighting worker protections like health and safety regulations, retirement security, and collective bargaining rights. Scalia’s reputation as the go-to lawyer for corporations wanting to avoid worker and consumer protections is so notorious that a headline in a Bloomberg Businessweek profile on Scalia read, “Suing the Government? Call Scalia.” Here are just a few examples of cases where Scalia, on behalf of corporations and trade associations, has attacked worker and consumer protections:

Scalia led the fight on behalf of the U.S. Chamber of Commerce against regulations to protect workers from injuries caused by unsafe workplace design—known as ergonomics rules. According to Labor Department experts, the rules would have prevented 600,000 injuries a year. Scalia ridiculed the extensive science underlying the rules as “junk science par excellence” and “quackery,” and suggested that unions supported the rules as a ploy to increase membership. The rules were adopted by the Labor Department in 2000 but were overturned by a Republican Congress after Bush was elected president in 2000.

Fighting ergonomic protections is where Scalia made his mark, but his attacks on worker health and safety protections did not stop there. On behalf of United Parcel Service (UPS), Scalia opposed rules that would have required employers, and not individual workers, to pay for protective equipment that was needed to keep them safe on the job. And he represented SeaWorld when it unsuccessfully tried to fight off an Occupational Safety and Health Administration (OSHA) citation and fine for failing to protect Dawn Brancheau, a trainer at SeaWorld who was killed on the job by a killer whale.

Eugene Scalia led the legal work attacking the Department of Labor’s fiduciary rule, which safeguarded workers’ retirement security by ensuring that investment advisers are acting in the best interest of workers and do not have a conflict of interest. The rule would have outlawed common practices such as financial advisers steering retirement savers toward investments that provide a good commission, but a lower rate of return. The Department of Labor estimated that conflicted investment advice costs workers $17 billion a year. Scalia attacked the rules on behalf of the U.S. Chamber of Commerce and other business interests, and persuaded a federal court to throw them out, leaving workers vulnerable once again to conflicted advice on their retirement investments.

In 2006, the Maryland legislature passed a law requiring large corporations to spend 8 percent of payroll on either providing private health insurance or paying into the state’s Medicaid fund. The legislature adopted the law to ensure that large corporations like Walmart were paying their fair share of health care costs for their 16,000 Maryland employees, after studies in other states showed large numbers of Walmart workers on publicly funded health care because of the low wages paid by Walmart. On behalf of Walmart and other business interests, Scalia got the law struck down.

Scalia represented the Boeing Corporation when it was charged by the National Labor Relations Board with illegally transferring work to South Carolina from its unionized plant outside Seattle, Washington in retaliation for workers at the Washington plant exercising their rights under federal labor law, and specifically their right to strike. Boeing and Republicans in Congress embarked on a scorched-earth campaign against the NLRB complaint, holding an oversight hearing in South Carolina and subpoenaing the NLRB’s Acting General Counsel to appear, and introducing legislation to overturn the NLRB complaint even though it had not yet been adjudicated. Boeing eventually settled the complaint in connection with collective bargaining negotiations with the Machinists Union.

On behalf of financial institutions and corporations, Scalia has attacked numerous pieces of the Dodd-Frank Act, that was enacted to protect consumers against Wall Street’s power. Scalia challenged the Securities and Exchange Commission’s “proxy access” rule that would have given large shareholders a chance to put alternative candidates forward for a corporation’s board of directors through the corporation’s proxy voting materials. On behalf of business groups, Scalia succeeded in getting the rule overturned, thus denying unions and other institutional shareholders access to the proxy system to inform shareholders about candidates.

Workers at United Parcel Service who were returning to work following medical leave for on-the-job injuries sued UPS, alleging that the company had illegally failed to provide reasonable accommodations for their disabilities. Workers successfully won certification of a national class of similarly situated workers to pursue their claims, but Scalia, on behalf of UPS, got the class certification reversed on appeal.

Dealers in a Las Vegas casino sued their employer after the employer instituted a new rule requiring the dealers to share their tips with their supervisors. Scalia got the lawsuit thrown out, arguing that the dealers did not have a right to sue for their wages—that their only remedy was through the state commissioner of labor.

Scalia represented the giant bank HSBC when it was sued for retaliating against an employee who reported sexual harassment of some of his co-workers by a manager. According to published reports, Scalia’s questioning of one of the sexual harassment victims was so aggressive that it brought the victim to tears.

Working people do not need a deregulatory wrecking ball as Secretary of Labor. They need somebody who will stand up for strong worker protection rules and aggressive enforcement of them. Unfortunately, the Trump administration seems determined to push through its deregulatory agenda, tearing down worker and consumer protections at the behest of large corporations. Former Secretary of Labor Alex Acosta reportedly lost favor with the Trump White House because he moved too slowly on reversing worker protections issued during the Obama Administration. Given his history of attacking worker and consumer protections at the behest of big business, there is plenty of reason to worry that Eugene Scalia will drive the deregulatory train, to the detriment of working women and men.

Scalia will have a confirmation hearing when the Senate returns in September. It is essential that Senators press Scalia for his views on the role of government regulation—and the role of the Department of Labor—in protecting working women and men. Senators should ask him to identify worker protections that he would promote, and whether there are cases he has been involved in on behalf of working people, not corporations. Senators should discourage Scalia from further weakening worker protections adopted during the Obama administration. These rules were adopted after extensive public input and are supported by comprehensive evidence demonstrating their value and importance to working people. They should not be weakened or overturned simply because anti-regulatory ideologues want it.

At the end of the day, Scalia’s answers to these questions are unlikely to persuade skeptics that he is the right man for the job, because words at a hearing cannot overcome a long career of attacking worker protections on behalf of corporations. But Scalia should be required to state on the record what his intentions are as Secretary of Labor and what he plans to do to protect working people, and, if confirmed, he must be held accountable.

This story was first posted at the Economic Policy Institute.